LE BOURGET: Embraer is redesigning its staggered E-Jet E2 business class concept cabin to integrate the IFE screens more closely into the seat, and will have to rethink the economy class BYOD tablet mount.

A spokesperson for the Brazilian airframer revealed the changes envisaged for the award-winning concept cabin design to Runway Girl Network during a tour of the company’s mockup of its next-generation regional jet family at the Paris Air Show.

Embraer has been showing the E2 concept cabin, created in conjunction with design house Priestmangoode, worldwide, and has won many plaudits — including a prestigious Crystal Cabin Award at the Aircraft Interiors Expo in Hamburg.

It’s surprising and possibly a little embarrassing for Embraer that it must redesign certain stand-out elements of the E2’s business and economy cabins when the interior is so highly regarded and has been extensively covered by the media.

Essentially, the protruding screens in business class – while attractive and unusual – have proven not to be durable enough for production.

“The screens will be more integrated in the seats, or in the monument in front,” the spokesman explained to RGN. 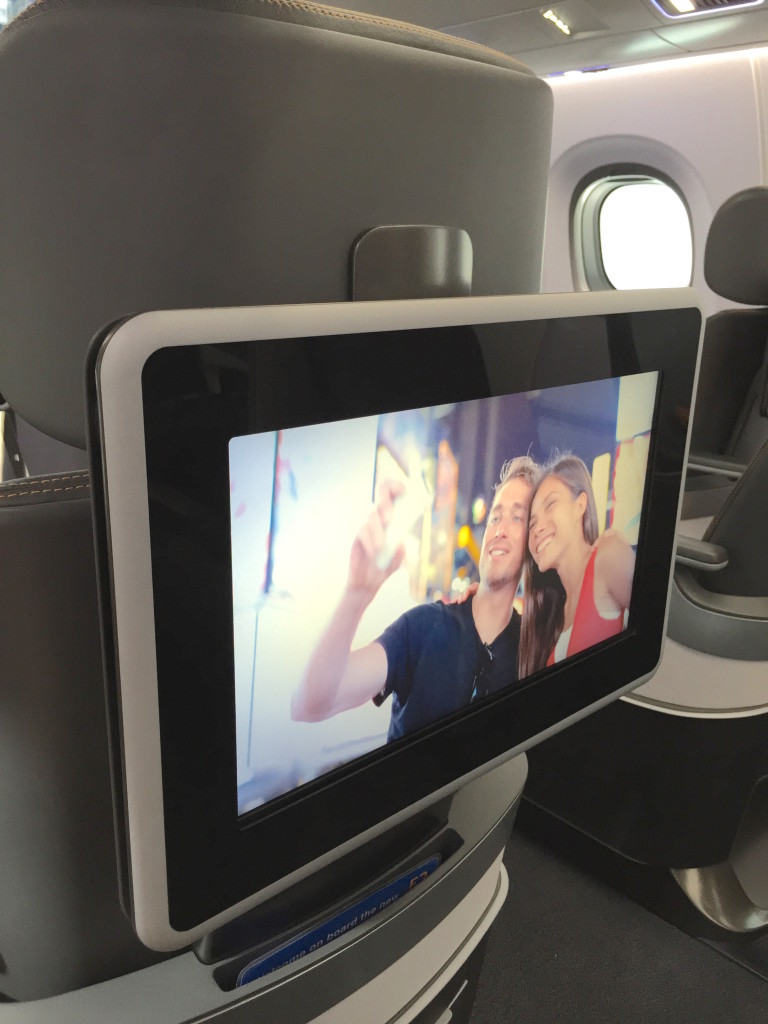 E2 business class IFE will need to be changed

RGN clarified whether the redesign is to address a problem of people brushing past in the aisle, given that small regional jets like the E2 are front-boarding, and passengers must walk past the screens, luggage in tow.

Apparently not. “It’s more for people grabbing the screen and breaking it, because it’s kind of in a fragile situation,” the spokesperson said. In fairness, it would be reasonable for a passenger to think that the accessible edges of the monitor suggest that it is adjustable — an issue not unique to the E2, of course, but which has still necessitated a redesign. 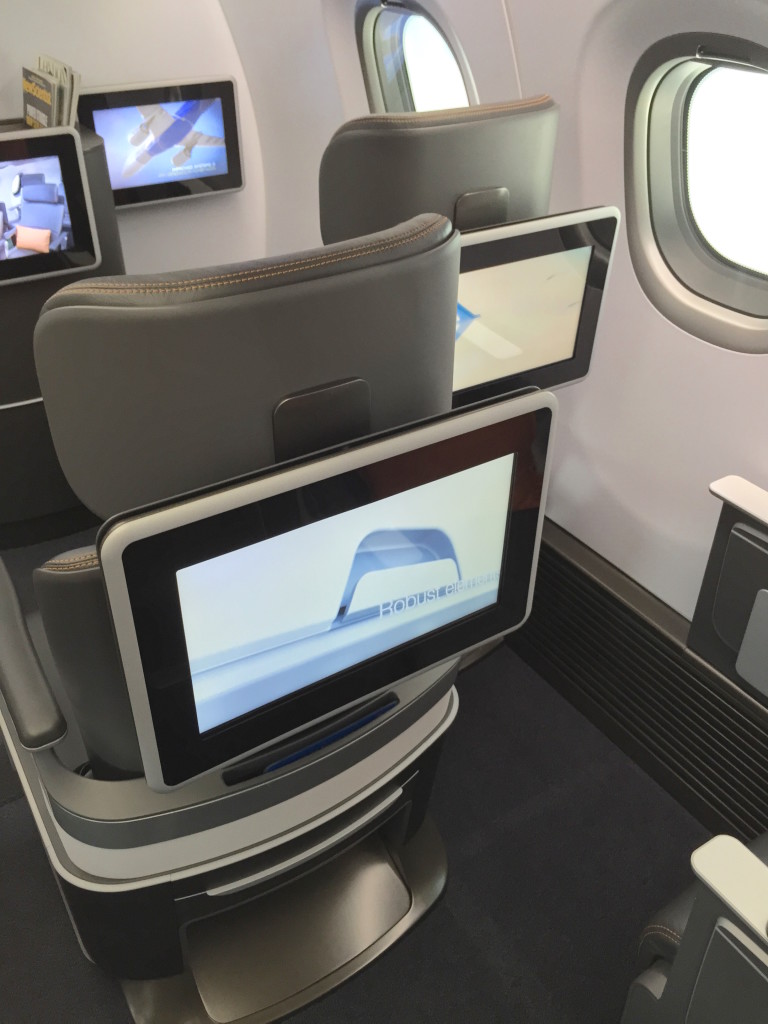 It is unlikely that the screens are being redesigned for head impact criterion (HIC) certification reasons, given that the staggered seats are pitched at over 50 inches, which would mean that any passenger’s head would clear the monitor in front of them by a matter of feet. Embraer’s spokesperson was unable to provide further information about whether the company had conducted further HIC testing on the cabin since RGN previously asked the airframer for a progress update on safety certification of the new interior.

Embraer and its partners will also have to redesign the sticky, magnetised mount that is intended to secure passengers’ personal electronic devices to the upper seatback in front of them in economy class.

The surface on display has not stood up well to continued use at the Paris Air Show this week, with the sticky surface (akin somewhat to the non-slip trays used by many airlines to stop meal place settings moving) losing its stickiness on the aisle seats, which saw the most use. The magnets are not sufficient to retain the device themselves. 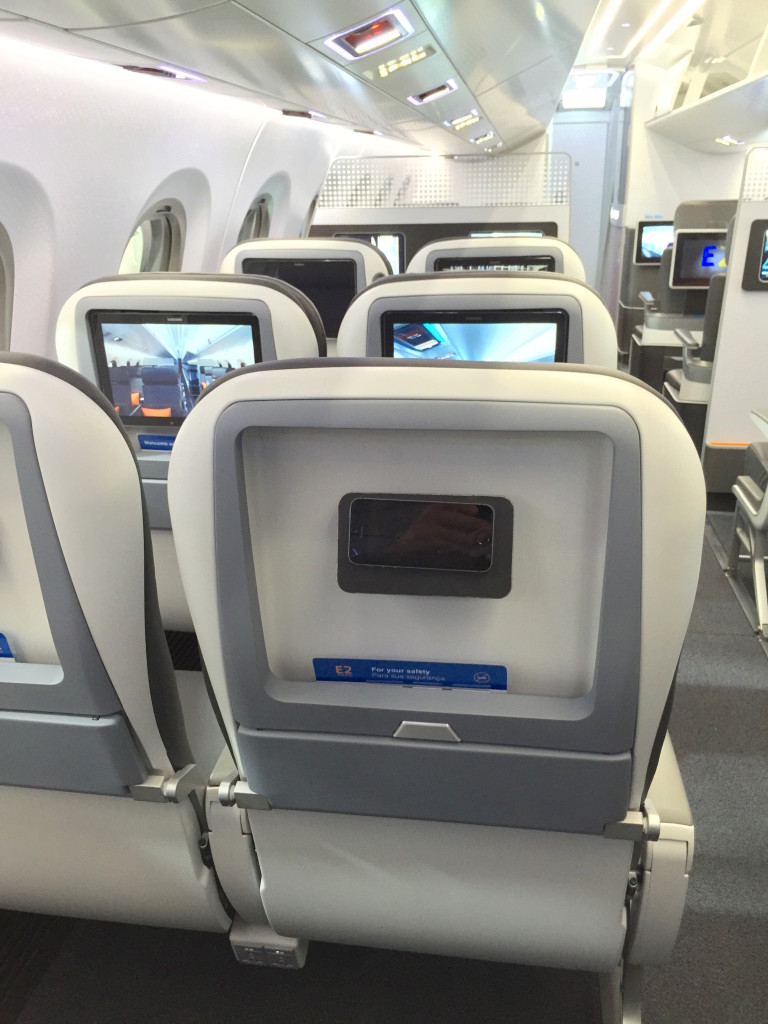 Getting phones to stay on the mount was tricky, even with this smaller iPhone 6, which means Embraer needs a redesign

The Embraer spokesperson apologetically suggested that RGN use the window seats’ mounts instead, and even then the iPhone 6 Plus used for testing did not stay up effortlessly, either in or out of its case. It’s clear that even slight turbulence or an abrupt use of the recline mechanism would lead to PEDs tumbling down onto trays, into meals or underfoot.

Asked specifically whether this will be redesigned, the spokesperson said “yes”, but was unclear if this is the responsibility of Zodiac, whose seats are on display in the mockup. The spokesperson referred to the more fully featured, movable-headrest Zodiac seats (which RGN understands were not previously named by the airframer) as Z2 Plus, and the less fully featured models as Z2. 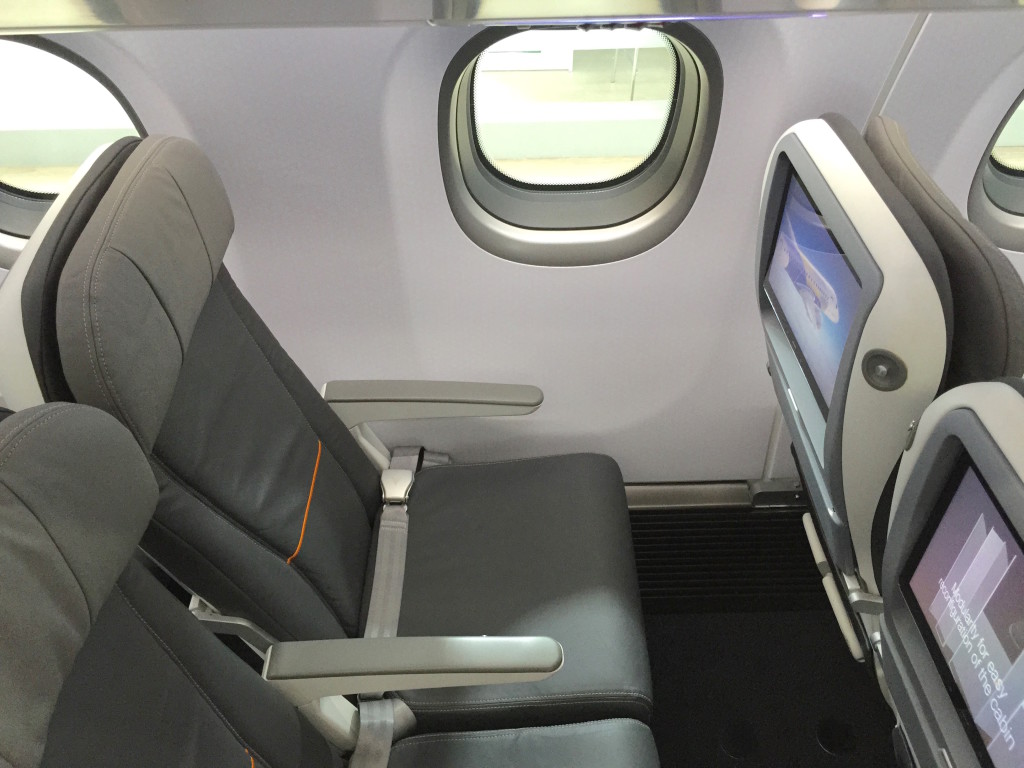 The seats Embraer referred to as Z Plus have headrests

The Z2 seats on display will not be the final version, with further work to slim down the seatbacks required, including the potential of shifting the knee-level literature pocket (uncomfortable at the 29” pitch displayed) to a higher position. Delivery, however, is still on track for 2018, Embraer confirmed.

See more images from the E2 mockup below. 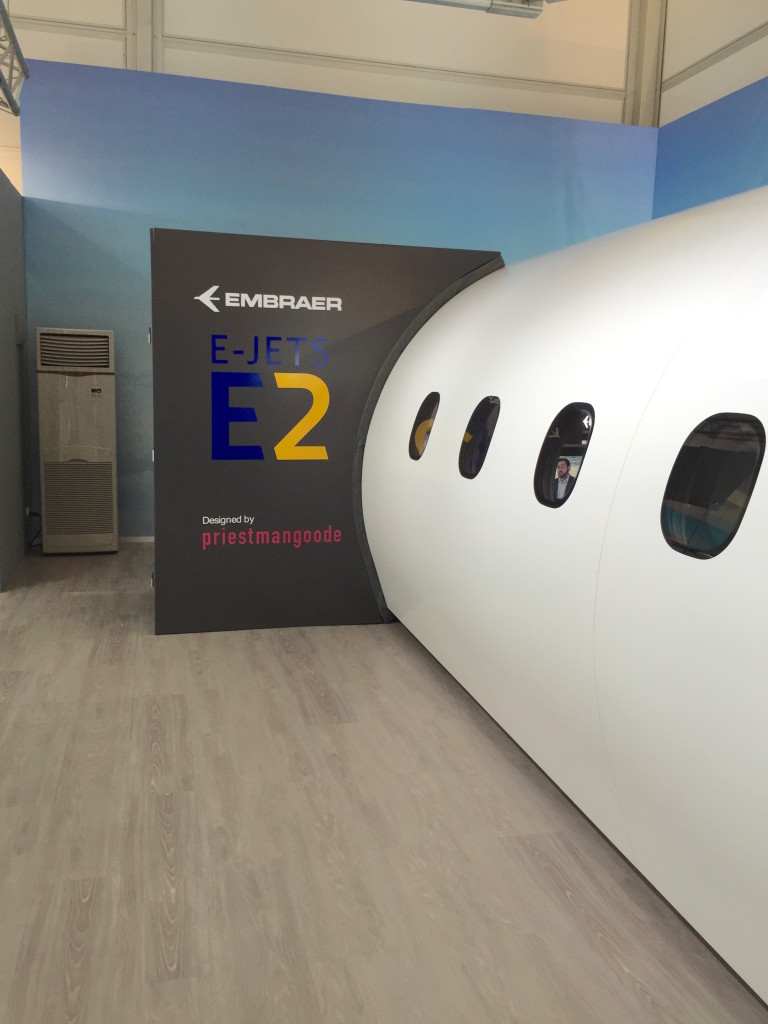 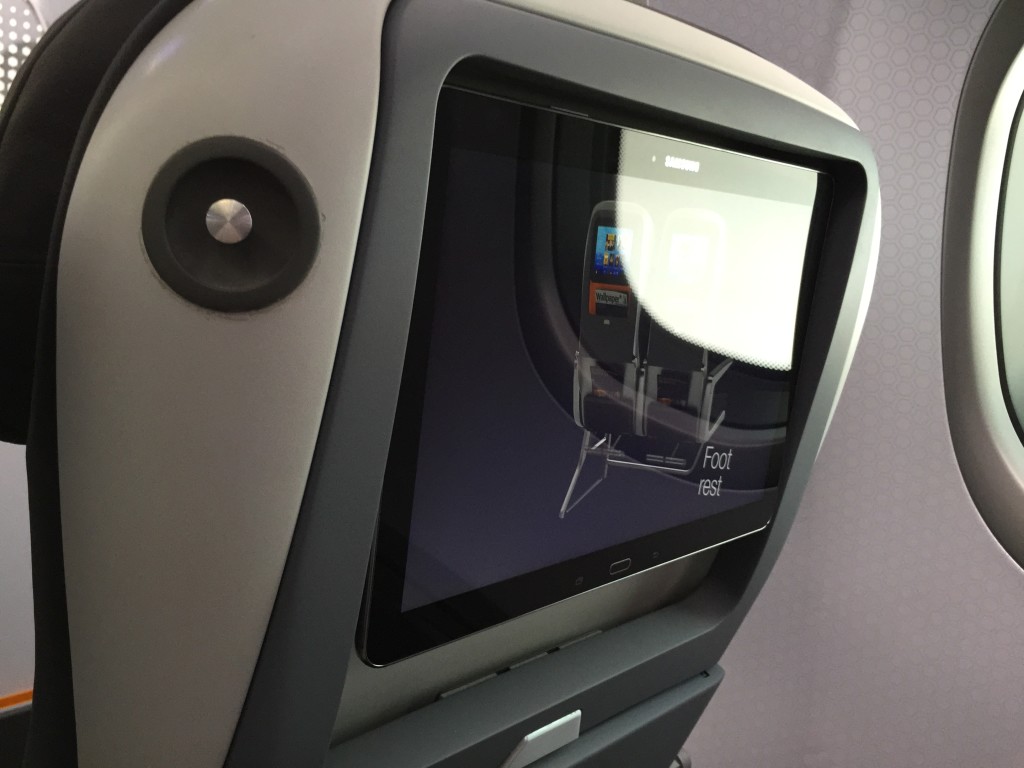 Embraer is showing stock Samsung Galaxy tablets hard-fixed to some of the seats, but is not intending to have them fixed on production aircraft for obvious HIC lethality reasons 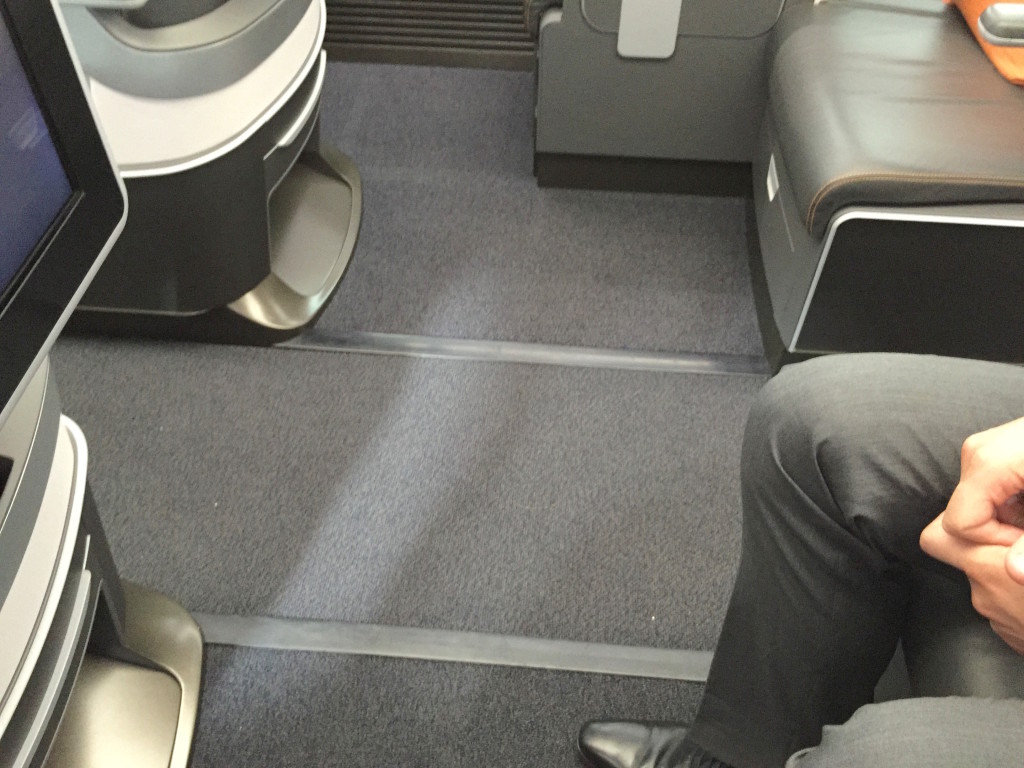 Aviation industry has never been hungrier for inflight connectivity