If you think social media’s negative response to the recently unveiled 11-abreast seating option for the Airbus A380 has sent the European airframer and its cabin interiors partners back to the drawing board, think again. Airbus and A380 lessor Amadeo tell RGN they are very satisfied with the 3-5-3 economy class cabin design, which they say will meet the needs of a new breed of customer.

“Many airlines see [the current 10-abreast A380] as their flagship aircraft. If there is a choice between the A380 and the 777 … people who are familiar with the types of comfort you get on airplanes will chase the A380,” says Dr. Kiran Rao, executive vice president, strategy and marketing at Airbus.

As such, the 10-abreast A380 with 19-inch wide seats for long-haul flights will remain the standard. “Are the airlines that currently operate the aircraft going to rip out the seats and offer 11-abreast? Probably not,” says Rao, stressing that “you don’t need 11-abreast to make the aircraft economics work” on the A380.

Amadeo, which pushed Airbus on the new design, agrees that the 3-5-3 configuration isn’t targeted at carriers who use the A380 as their flagship. Operators such as Emirates, whose A380 economy class product “is like Premium Economy” don’t need to go 11-abreast, Amadeo CEO Mark Lapidus told RGN during a recent interview at the CAPA Aviation summit in Las Vegas.

But while the first wave of A380 customers will likely retain their 10-abreast economy cabins, “we’ve now entered another wave and are in discussion with airlines” that operate a different type of service in a different environment, says Airbus’ Rao.

“A380s don’t have to always fly on long-haul missions,” he says, noting that a lot of routes in Asian regional markets – think 6-8 hour flights from parts of Southeast Asia to India or Japan – are served by A330s and 777s (AirAsia X, for instance, flies super snug 9-abreast A330s), “and a lot of those routes would support the 11-abreast A380”.

The carriers suited to 11-abreast represent “a few airlines” and “are not brand new operators”, he says.

Though Airbus originally suggested it would raise the floor of the A380 to achieve the 3-5-3 layout, the airframer opted not to pursue this course of action. Instead, the design unveiled at the Aircraft Interiors Expo (AIX) in Hamburg “is an easy solution to get more capacity in that doesn’t require lots of work”, says Lapidus. And it retains an 18-inch comfort standard for seat width.

As RGN contributing editor John Walton reported from AIX, Airbus achieved its record density “by cutting seat width by between 1 and 0.5 inches, slashing armrest widths by just over 2cm (nearly an inch), angling window armrests outwards, trimming aisles and — in perhaps the worst case of foot space restriction for window passengers since Bombardier’s Q400 turboprop — jamming window seats up against the wall so far that they overhang six inches above the start of the curved sidewall.” 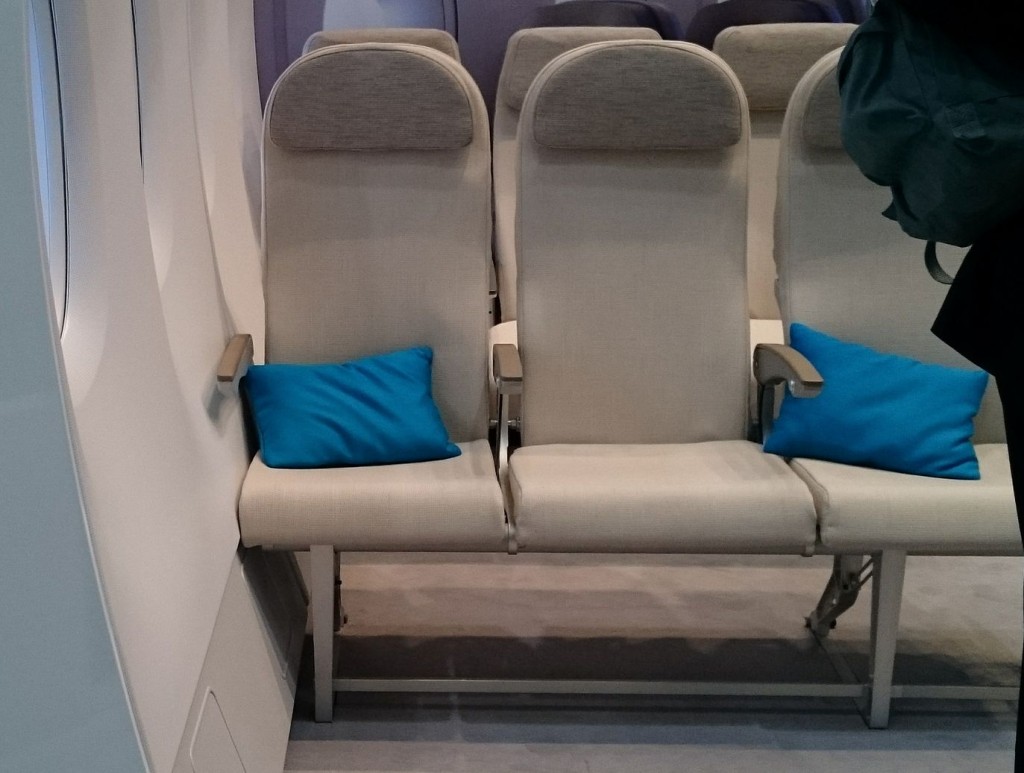 But Airbus and Amadeo sees the new design as an efficient use of space. “On the A380 main deck, the sidewalls move away from you so [we’re] utilizing that space; we still maintain the 18-inch width,” says Rao. “It delivers not just the A380 comfort but another standard of economics … another level of efficiency.”

Amedeo advertises this baseline 4-class A380 cabin on its web site. The layout features 590 seats and 11 abreast economy class seating

Amadeo’s Lapidus is equally pleased with the new design. “I think it is great. They’ve finally woken up to the fact that the A380 needs to be seen by people not as some kind of strange thing which … they marketed in the past and what airlines talked about in the past – shower rooms, casinos and swimming pools,” he says, adding, “It may be a niche workhorse … but it is a workhorse that would enable hub-to-hub connectivity at lowest unit cost, and 11-abreast is something they should have done a long time ago.”

With specific regard to the window seat, Lapidus insists, “I’ve sat in that seat and think it’s pretty comfortable.” He doesn’t believe the photos shown on RGN do the seat justice. Moreover, he says it is “hilarious” for his golfing buddy, Boeing VP of marketing Randy Tinseth to be complaining in his blog about the window seat “given that Boeing puts out 787s at 9-abreast with seats that are about 16.9 inches…”

At the end of the day, says Airbus’ Rao, offering the option of 10- or 11-abreast configurations on the A380 is all about giving airlines choice. “With Boeing, if you want comfort, you don’t get [the] economics; if you want the economics, you don’t get comfort.”

The 9-abreast Boeing 787, for example, “is a very uncomfortable tube” in economy, he says. “They should rename the Dreamliner the Nightmareliner.”

Overhead bin space is increasing…but is it increasing fast enough?