In Cleveland, most visitors make a beeline for the Rock & Roll Hall of Fame & Museum. But those in search of a truly far out experience need only walk a short distance from the Rock Hall to Burke Lakefront Airport, where the International Women’s Air & Space Museum stretching along the airport lobby is a treasure trove of memorabilia and artifacts documenting the history and modern-day contributions of women in aviation and space.

Thoughtfully laid-out exhibits tell the personal and professional stories of pioneering aviatrixes such as Harriet Quimby (the first woman issued a pilot’s license in the US), Bessie Coleman (first African-American woman pilot in the US), world record-setters Ruth Nichols and Jackie Cochran (director of the Women’s Airforce Service Pilots, or WASP) and, of course, Amelia Earhart. 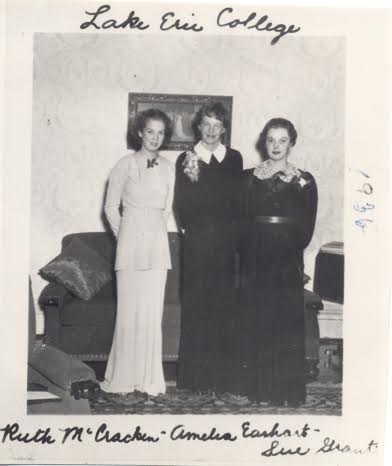 Some Earhart items, including photographs and bits of airplanes are on display, but a gray nursing uniform, a flight suit, a lei presented to her in Hawaii and a cache of other rare items are tucked away in the museum’s excellent archives. 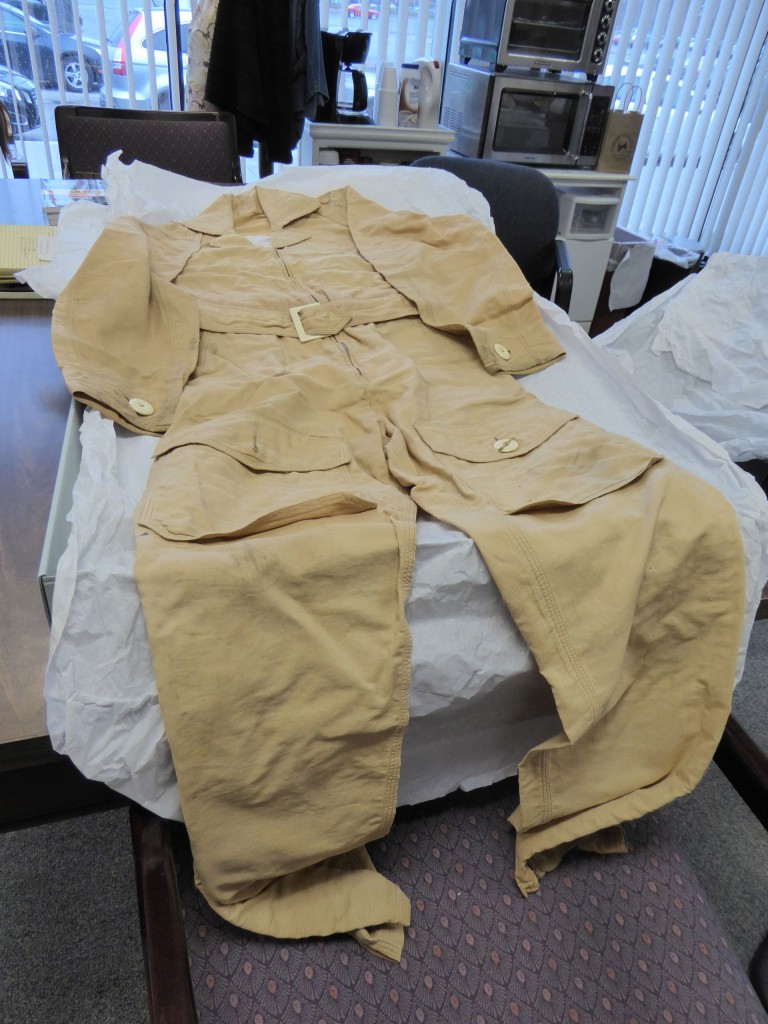 Original Amelia Earhart flight suit in the collection of the IWASM. Photo by Harriet Baskas.

Orville and Wilbur’s Wright’s sister, Katherine, gets a full exhibit case devoted to her life and to her overlooked role as sounding board, social secretary, business and marketing manager and ambassador for her brothers. In addition to newspaper clippings, letters, photographs and personal items from her home, the museum displays the white cotton and lace dress Katherine wore to accompany her brothers at a reception held in their honor at a White House in 1909. 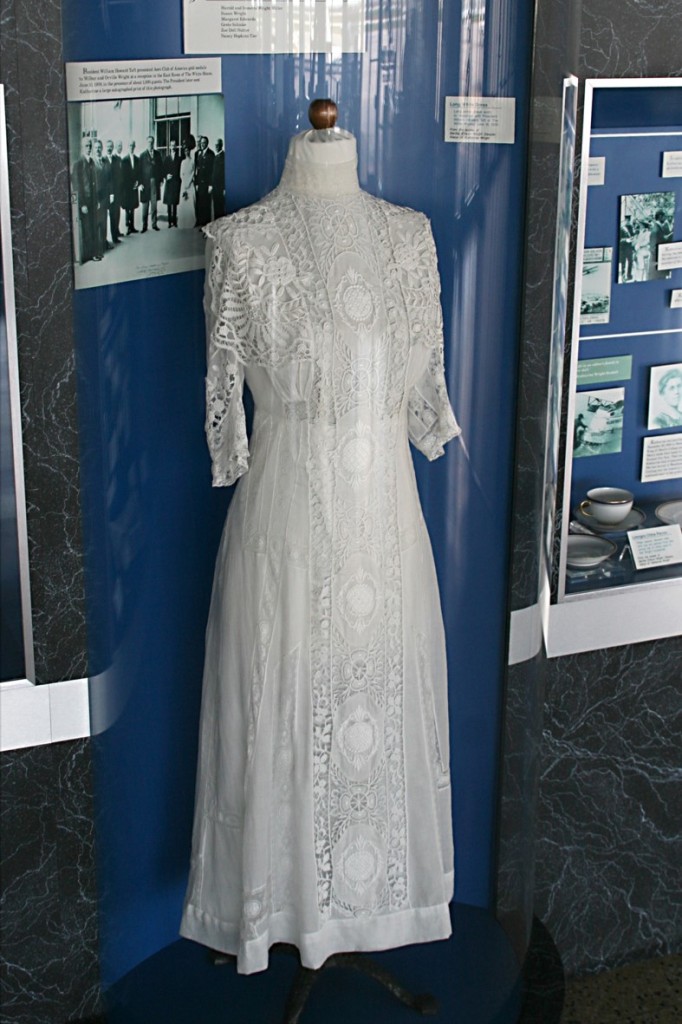 Katharine Wright’s dress – worn to a reception for the Wright Brothers at the White House. Photo courtesy of IWASM.

Along one wall, artifacts, letters and photographs tell the story of the thirteen women pilots who underwent secret astronaut testing in 1961 in hopes of becoming some of the country’s first women astronauts.

The First Lady Astronaut Trainees (FLATS), also known as the “Mercury 13,” passed many of the same physical tests completed by the men who would become the first American astronauts (the Mercury 7), however, NASA and a series of congressional hearings shut down the unofficial FLATS program.

It took until 1983 for Sally Ride because the first American woman to go into space. (The first woman in space was Soviet cosmonaut Valentina Tereshkova, in 1963).

The Wall of Fame at the International Women’s Air & Space Museum includes photos and flight information about every woman astronaut – and cosmonaut – who has flown in space. And it’s encouraging to note that there are now so many women who have been to space – or who are qualified and/or scheduled to go there – that the IWASM has run out of space to add new portraits on the original wall.

No problem: the Wall of Fame now snakes into another area of the museum.

One NASA astronaut whose portrait is on the Wall of Fame is Ohio-born Sunita Williams, who holds the record for total cumulative spacewalk time by a woman astronaut. 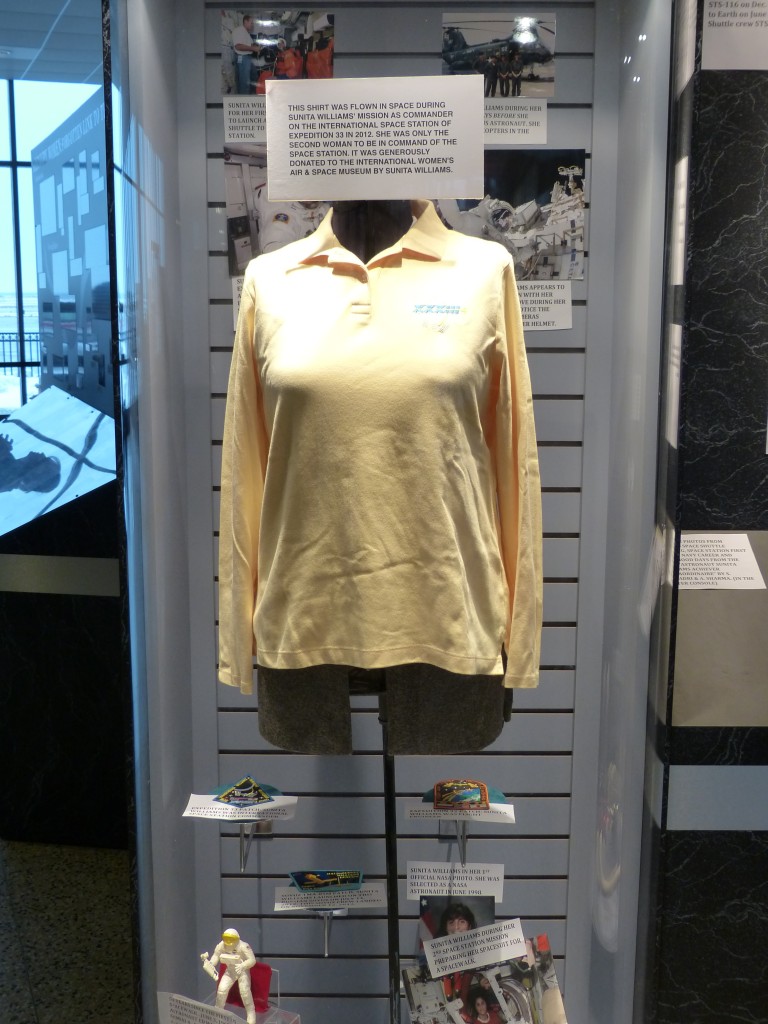 Flown in Space: NASA astronaut Sunita Williams wore this shirt while Commander of the International Space Station on Expedition 33 in 2012. Photo courtesy of IWASM.

Williams served as a flight engineer for Expeditions 14, 15 and 32 to the International Space Station and served as commander on Expedition 33. A shirt Williams wore in space on that last expedition is now on display at IWASM in a special exhibit marking the 50th anniversary of the first spacewalks, which took place in 1965.

The International Women’s Air & Space Museum is in the lobby of Burke Lakefront Airport, 1501 North Marginal Road, Cleveland, Ohio and is open daily from 8 a.m. to 8 p.m. Admission: free. (Phone: 216-623-1111). Be sure to visit the gift shop (open 10 a.m. to 4 p.m. weekdays) which offers very reasonably priced books about women in aviation history, as well as space-themed gifts and snacks.