Maybe it’s just in former music man Tony Fernandes’ blood to do things differently than the majority of commercial airlines, but when it comes to hiring women to senior level and C-suite positions the AirAsia Group CEO doesn’t think twice.

“Women are good leaders and much more pragmatic than men. A lot of our senior executives are women,” Fernandes said today at the Center for Aviation (CAPA) summit in Las Vegas.

Aireen Omar, who serves as executive director and CEO of AirAsia’s Malaysian operation, and Joy Cañeba, the CEO of AirAsia Zest in the Philippines, are among the women playing pivotal roles in AirAsia’s growth, he says.

But on the operations side, AirAsia also has an admirable track record for hiring women. When the carrier inaugurated operations in 1996, “we had no female pilots, and I asked the chief pilot why,” says Fernandes. Sparing the audience the chief pilot’s knuckle-dragging response to his question, the AirAsia CEO says he declared, “If a woman can run a country, she can certainly be a pilot.“

All joking aside, Fernandes’ attitude is more than “pro-woman” and “pro-equality”; it’s simply good business, and it underscores the company’s broader corporate culture.

“The strength is our people; that’s the biggest asset we’ve had in AirAsia,” he says, noting that the company “couldn’t go from two planes to 200 planes” otherwise. The group – comprising effectively nine different airlines – has 17,000 staff now “and not a single union. Everyone has my mobile phone [number], and that’s how we’ve been able to keep a tight cost structure; people are the assets.”

AirAsia and its affiliates operate short-haul flights on legs of up to four hours, and the group’s AirAsia X long-haul, low-cost airline operates flights over four hours.

The “father of the cross border JV”, as CAPA executive chairman Peter Harbison calls Fernandes, sees growth opportunities on flights of up to eight hours from Malaysia, though ultimately the carrier would “like to go to at least one place on every continent.”

He thinks “it’s important to be in London” once again, and Hawaii in America “seemed logical”, thus the reason AirAsia X is launching service on the route in November.

Though Fernandes isn’t deeply impressed with the Airbus A350 XWB – saying, “we’ve given up on the A350” – AirAsia “fought hard with Airbus for the [re-engined] A330neo, and we really believe in that aircraft”, which will support further growth, possibly to the US.

Soberly discussing the tragic 28 December 2014 crash of Indonesia AirAsia flight 8501, Fernandes says, “Whatever great has been done over last 13 years, you’re not able to deal, or cope with that. It’s the worst thing an airline can go through. But we find a way to keep moving on, and look forward to the next 50 years.” 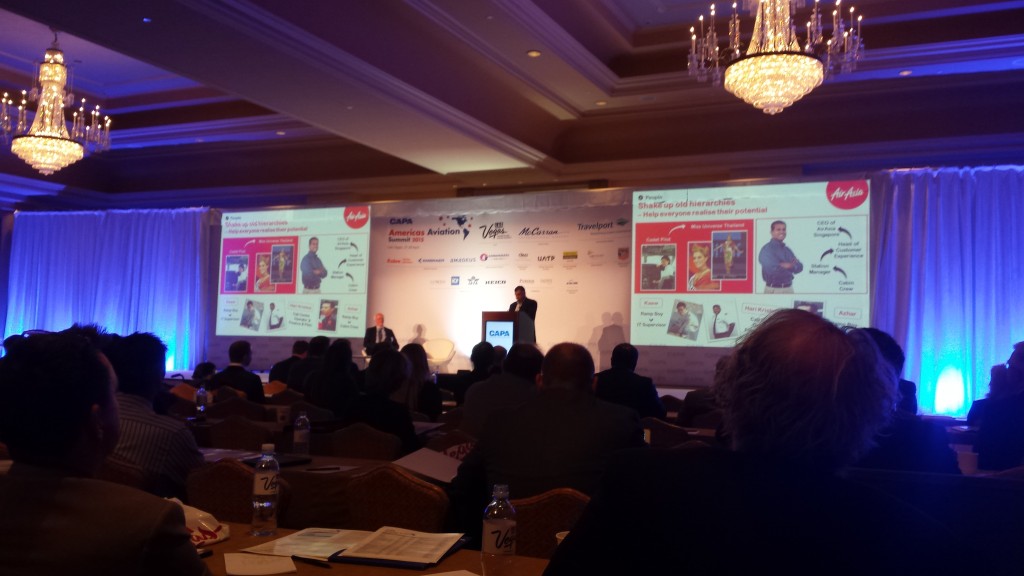