A lot of people seem to think that the fight between the established carriers of the world and the “big three” Middle Eastern airlines (M3) on everything from Open Skies to labor costs is just a slap fight between corporations. In America, it is – for now. But in other countries, protectionism became a matter of government policy at the behest of the local airlines.

Here’s the thing: I’m a Canadian. I’m a Canadian in the airline business, no less. Canada has one of the most restrictive aviation bilateral policies in the world. It hates the very concept of sixth freedom traffic, which is a term describing the right to carry passengers or cargo from a point of origin in one foreign country to a point of destination in another by stopping in one’s own country. That is, unless your airline started before 1960. Lufthansa, Air France, KLM, British Airways, and even Cathay Pacific have carte blanche to visit any Canadian city they choose and take away precious O&D traffic from Air Canada.

But Canada has managed to restrain growth from Gulf carriers. Tensions escalated when Air Canada demanded that government deny the airlines of the United Arab Emirates additional destinations and frequencies in a newly renegotiated bilateral. In retrospect, such a singularly focused argument barely seems like cause for a major trade fight. Sadly, the results in the trade tiff between Canada and the UAE were immediate. Military bases were to be vacated, visas were required for Canadian citizens – it was starting to become more than just unfriendly glares in the hallway.

I know because I got a taste of the fallout firsthand, and learned that beyond corporate squabbling these arguments have harmful consequences.

Having attended university to learn the airline trade in Australia, I expected that gaining employment with the major airlines of Canada was going to be a non-starter. Even then, I had my sights set on bigger prizes. I wanted to work for Emirates or Etihad and live the glamorous lifestyle of a gulf aviation magnate. Based on my academic performance, I thought I was on track for that.

After hearing his lecture at university, I had the opportunity to meet with a high-level Emirates employee. We had a lively discussion about the impact of protectionism, the importance of offering a good product, and even a bit about fleet strategy, and he seemed very interested in working with me. That is, until I mentioned my passport was not property of glorious Uncle Sam but had strange looking lions on the front of it and two languages instead. His face fell, and his response was, “We prefer not to hire Canadians right now.” The same thing happened at Etihad, Singapore, and a few other airlines that had engendered the ire of Air Canada for having the audacity to offer superior products and connections.

What was I to do but become a prematurely bitter old man?

The present fight between US carriers and the M3 is about subsidies distorting the global airline market. But now that American Airlines has become so unapologetic regarding its partnership with Etihad – and is expanding codesharing on US routes –  it all seems a little circular. Remaining legacy US carriers and their corporately created Partnership for Open and Fair Skies and the Lee Moak-run non profit Americans for Fair Skies can no longer present a coherent front.

Realistically, it was always going to fall apart.

Etihad alone provides 25,000 passengers to US airlines per month. Now that the Etihad and American pact is expanding, the once voracious stance of “we are against all government airline ownership” will have to be softened. You see, being against all government owned airlines would be casting aspersions not only on the Chinese airlines, but also alliance partners in other parts of the world such as Saudia.

Indeed, during yesterday’s Center for Aviation (CAPA) summit in Las Vegas, where representatives for both sides duked it out, the attitude from the US could best summarized as, “we are against government ownership of airlines, except when we aren’t”. 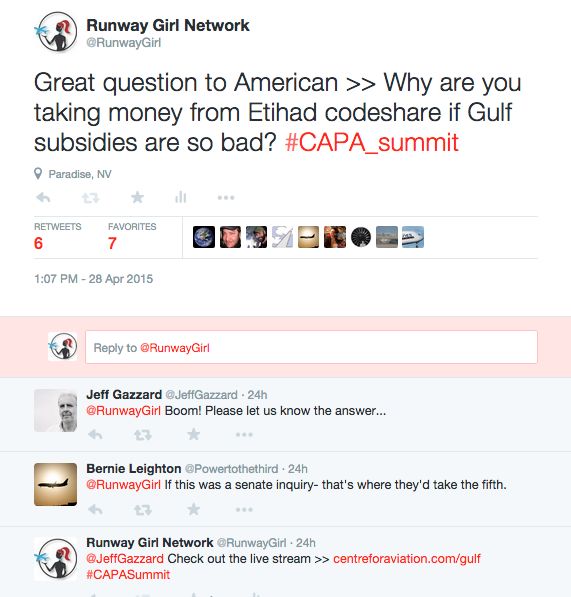 It is the duty of the USA’s three biggest carriers – Delta, American and United – to out-compete each other for every possible cent of the US air travel market they can grab. They have an obligation to their shareholders to grow every quarter. Eventually, another one of them will completely break and cave in to engage with friendly relationships with a Gulf adversary in the hopes of adding cents per share. Their hypocrisy will be ignored.

Unfortunately, this fight has never been about the consumer. Who benefits in a truly liberalized air market? Well, the economy writ-large. Consumers enjoy lower prices, which means they have more money to spend on other things. It’s a general economic rule.

Also, the economic multiplier effect that a new route can create is a lot larger than you’d expect. For example, during the lively CAPA discussion it was revealed that Emirates’ new route between Dubai and Orlando is estimated to create at least 4,500 new jobs in the Orlando area alone. Every plane that lands in Orlando creates 13 new jobs, noted the US Travel Association.

Competition also forces innovation. While American’s new high-density business class seat has encountered a troubled launch on the Boeing 787 due to production delays, the seat – currently flying on refitted 777-200s – is not what what ultra frequent flyers would call especially innovative. Telling  moderator Ken Quinn that “it’s so superficial” to ask if business class on the M3 carriers is better than the US product, American seemed to intimate that, to them, the customer is nothing more than a sack of cash to be drained on demand.

So, what is cheaper? Investing in a new fleet-wide product that enhances customer value, or spending a few million dollars to legislate away a competitive threat in a bid to preserve the status quo?

This fight becomes more of a parody of itself with each passing day. Even FedEx – one of the largest airlines in America – cannot understand why the US legacy carriers are trying to shoot themselves in the foot. FedEx competes against government monopolies every day in every country it serves – the postal service! The carrier has never once picked a fight with any government trying to legislate the post office out of existence. And Dubai has become a key part of the FedEx network. Simply put, the airline has embraced Open Skies.

American consumers (including new-Americans like myself) love choice, and we vote with our wallets. Trying to legislate away the ability to compete flies in the face of everything the American flyer holds dear. 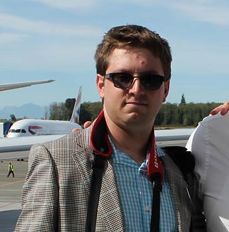 About the author, Bernie Leighton:

Bernie has traveled around the world to learn about, experience, and photograph different types of planes.  Bernie will go anywhere to fly on anything.  He spent four years in Australia learning about how to run an airline, while putting his learning into practice by mileage running around the world.  You can usually find Bernie in his natural habitat: an airport.