Is there room for a fourth Arabian global hub? National airline Saudia and the powers behind Jeddah’s King Abdulaziz International Airport seem to think so, and the first stage of a significant revamp of the airport is due for completion this year. Yet with emails to the project team returned as undeliverable, and progress details vague in the airport’s February update below, the exact plans and current state of play are opaque.

In terms of scale, if the total annual capacity of 30 million passengers is realised, that would bring Jeddah airport to roughly the size of the current Doha airport, slightly larger than the current Abu Dhabi terminals, and less than half the size of Dubai International.

Yet Saudi Arabia has something that neither Dubai, Doha nor Abu Dhabi have: hajj, the annual pilgrimage to Mecca, and the largest annual gathering of people in the world.

Since Mecca is just 43 miles from Jeddah’s airport, the spike in passenger demand for one month out of the year is astronomical, and the airport serving a city of just 3.5 million people is serviced by additional Boeing 747, Airbus A380 and other widebodies, largely on a charter basis.

Underlying destination demand even outside the annual hajj is significant, yet is not consistent throughout the year. The demand from umrah, the name for pilgrimage to Mecca made at any time of year, means that Emirates regularly offers sixteen weekly A380 round-trips between Dubai and Jeddah, with 28 weekly Saudia roundtrips plus services on Flydubai and Nasair. While hajj visitors require a specific visa and almost exclusively travel on chartered aircraft, umrah travelers can make their own way to Mecca via regular scheduled flights.

Yet the spike during hajj led to the creation in 1981 of Jeddah’s 80,000 passenger hajj terminal, with indoor air-conditioned baggage, customs and administrative facilities facing shaded outdoor waiting and shopping areas. The airport — and much of the region’s infrastructure — creaks at the seams, requiring a quiet period post-Hajj where fewer visas are issued, restricting travel to enable a massive cleanup operation. The required valley of travelers to catch up with the peaks of hajj would be an added challenge for network design in a global hub. 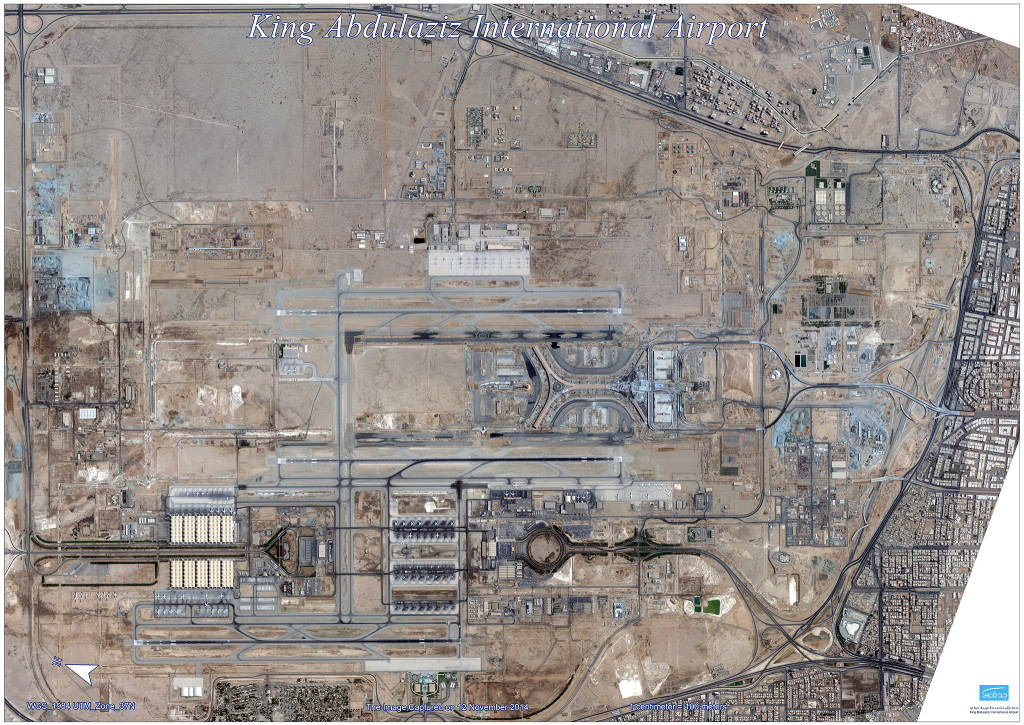 In terms of network design geography, Jeddah has a slight operational advantage over the three hubs on the Gulf: its location on the Red Sea means that overflying Daesh conflict zones in Iraq and Syria would not be required for the shortest routes to Western and Central Europe, with eastern Europe requiring a few diversions into the Mediterranean. 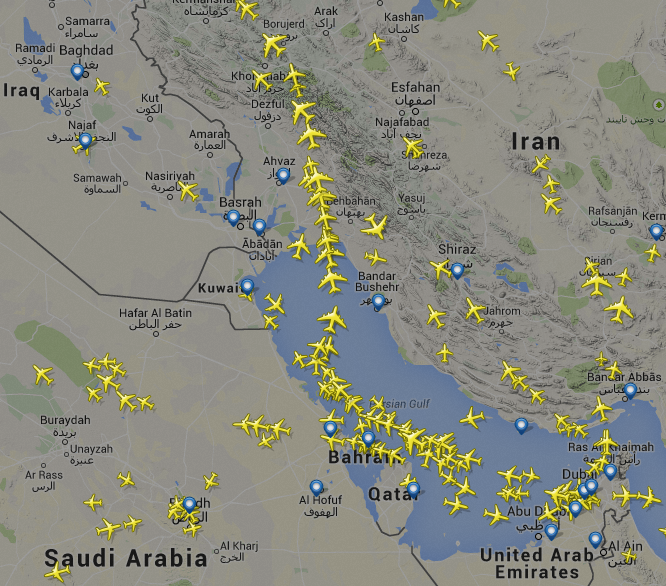 The A380 conga line around Iraq is obvious in mid-morning local time. Image — FlightRadar24

Of course, the key player in any expansion of Jeddah is Saudia, despite Emirates’ multiple daily A380 services. International observers may not appreciate just how large Saudia is — around the size of Qatar Airways, Korean Air or Cathay/Dragonair in terms of destinations and fleet, larger than Etihad but smaller than Emirates. 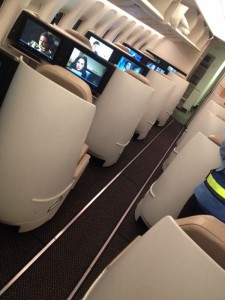 Saudia’s VP marketing & product management Abdulrahman Al Fahad previously signalled his airline’s intentions to RGN (as reported by RGN Premium in November 2014) with a simple yet powerful statement about rival hubs in the Gulf: “They don’t have Mecca.”

“Saudi Arabia is the market; it will remain the source of traffic and that’s where we deploy all our resources,” Al Fahad declared. Passengers “don’t come to Jeddah for duty free… they come to visit the holy shrines.”

“By first or second quarter 2015, the new airport in Jeddah will open and there will be a massive shifting of traffic to Jeddah. Dubai and Doha hubs – there will be a competition. Emirates now have the shortest A380 routes. It is a two-hour flight to Jeddah from Dubai; they are scavenging passengers from Saudi Arabia, and distributing to the rest of the world.”

With recent #PaxEx upgrades to Saudia’s Boeing 777-300ER fleet, including a competitive fully flat B/E Diamond bed with a 2-2-2 layout in business class, and a 3-3-3 configuration in economy the airline has arguably stepped in front of Emirates’ own 777-300ER fleet, which offers a narrower angled lie-flat seat in a 2-3-2 configuration in business with high-density 3-4-3 economy down the back. Saudia’s seat decisions are a positive sign for an airline with a relatively uncompetitive hard product across much of its fleet.

Yet the soft product on board Saudia is still below standard, says author and travel blogger Elena Nikolova, who flew Saudia to Jeddah recently and experienced the umrah immigration process. 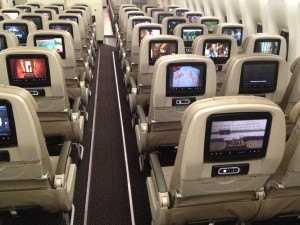 “Staff seem overworked and not interested in welcoming or providing an experience for their passengers,” Nikolova told RGN. “Food quality is below average and at best it’s inedible. Cleanliness needs to improve.”

“Nowadays it is not enough to be a national carrier to the holiest place on earth for Muslims, you need to compete on all levels in order to retain customers and not be seen as a ‘last option’. Saudia has great potential, but  considering that there is a great competition of other Middle Eastern airlines it seems that passengers are giving their custom to them,” Nikolova concluded.

Yet the passenger experience gulf between the Emirati/Qatari airlines might be opportunity for Saudia to become a cut-price, cut-luxuries carrier to compete at the lower end on routes where, say, Emirates runs its regionally equipped A330-200s and older 777 equipment. Given Jeddah’s significant experience dealing with first-time and infrequent travellers for hajj and umrah, Saudia is potentially at an advantage at this end of the market.

At the end of the day, for premium transit passengers, the to-do list for Jeddah Airport and Saudia is long and complex: appropriate lounges, appealing airport retail, wide-ranging food & beverage, upmarket hotels, activities during transit (and visas to enter the country rather than remaining airside), a focus on speedy arrivals/departures — not to mention a solution to the thorny questions of independent women travelers and Saudia being a dry airline.

Success of Lufthansa’s PE seat to determine rollout on sisters

Employees to be immersed in JetBlue corporate culture at The Lodge