Air New Zealand is seeking to achieve an aviation Holy Trinity of financial strength, strong passenger reception and staff engagement. CEO Christopher Luxon on 25 February delivered one of the carrier’s best profits but quickly followed the announcement with a declaration that leading airlines must invest in the passenger experience (#PaxEx) and its employees. Air New Zealand is one of a handful of investment grade-rated airlines and the only one outside Europe and North America.

“Internally we’ve talked a lot as an organization about…becoming a truly great and world-class one. For us that means a really great and world-class company can do three things at the same time: they deliver superior commercial results and they enhance the customer experience and they build the culture and leadership of their own organisations,” Luxon said.

The carrier wants to show it is finding a balance between increasingly contested views: from consumers that see airlines as being in a race to the bottom, from management that see consumers as insatiable, and from staff that believe they are forgotten about by all.

Luxon made no apologies for the strong financial result, essentially seeing profits as part of a cycle to fund investment in the passenger experience and staff that brings passengers back, creating more earnings growth. “Without these profits this growth and this enhancement to the customer proposition wouldn’t be possible,” Luxon said.

His remarks come as there are global shifts in the balance between profits and investment. Old-time sweetheart JetBlue has bowed to Wall Street pressure to crank up ancillaries while once-despised Ryanair is working on customer improvements, with its famous line that some of its measures “unnecessarily piss people off” – and ultimately limit growth.

Air New Zealand has innovated with the Skycouch (pictured above) and sought to change distribution practices with its branded fares. Awards are aplenty but not all are happy with the airline. Frequent flyers have seen award programme devaluations and other changes. RGN‘s article from John Walton bemoaned reduced wine options in economy.

Perhaps that is part of the balance Air New Zealand is trying to find between cost-saving and what customers want. Air New Zealand’s passenger service costs decreased 1% in the six months to 31 Dec 2014 despite a 1.7% increase in passenger numbers 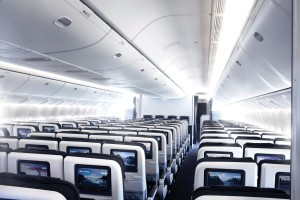 Though the carrier’s 10-abreast 777 economy configuration doesn’t hit high #PaxEx marks for some travelers, it may also be pragmatic. Asia was a holdout on 10-abreast, but new 777 operators China Airlines and China Eastern have 10-abreast while All Nippon Airways is retrofitting some aircraft to have 10-abreast long-haul.

Airlines may say it is hard to resonate with Air New Zealand, which sees limited competition in its plump domestic market and where long-haul flights are not as competitive as in Australia. But perhaps there are lessons to be learned. “Many things about Air New Zealand can be copied” but not its staff, Luxon said.

“We’re still a relatively small airline,” he said. “There are lots of larger, better-resourced airlines and competitors that want to hurt us.”