ANA says it has been trying to find a balance between seat width and pitch. Further it will not have a universal 10-abreast configuration on its long-range 777s, chief executive Osamu Shinobe told RGN at the recent Star Alliance annual meeting in New Delhi.

“There are a mixture of different ideas now,” Shinobe says of the passenger preference (#PaxEx). “Some say width, some say pitch.” ANA has commenced using a 777-300ER configuration with 10-abreast seating, its first of the higher density on a long-range 777 (domestic variants already have 10-abreast). 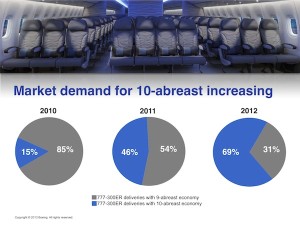 The retrofit has seen ANA gain 14 economy seats across 19 rows. Seat pitch is technically the same at 34 inches but ANA notes that the new seat has a carved-out lower back, creating more knee space. ANA plans to use these aircraft for mid-range long-haul destinations such as on the west coast of the US, but longer flights like to New York and Washington will use the existing nine-abreast configuration. Shinobe says not all long-haul 777s will transition to 10-abreast.

“If pitch will be important, then we can [go] from nine to 10 abreast or eight to nine abreast, making the width narrower,” Shinobe says of the 777 and also 787. The Dreamliner is gaining seats but also pitch. ANA’s previous 787 had eight-abreast seating with a 31-inch pitch but the new nine-abreast seating has a 34-inch pitch, according to ANA.

Unlike on the 777s, Shinobe says ANA will unify its 787s with the same economy configuration. “Eventually, although the timeline may be a bit far away, we’ll be moving towards [9-abreast],” Shinobe says. The economy retrofit will be done at the same time ANA changes its regional business class to lie-flat, matching Japan Airlines.

“We’ll convert that into full-flat in the future and together with that timing, we’d like make economy class nine-abreast,” Shinobe says.

Tim Clark, the president of Emirates, a much larger transfer traffic-heavy carrier, told the Wall Street Journal: “On a 777, ten-abreast is the way to go…You’d be nuts to do it any other way.”

[Photo by Aero Icarus from Zürich, Switzerland, via Wikimedia Commons]

RGN analysis: QZ8501 weather not as ‘unusual’ as reported

Op-Ed: Airlines should take control of the mobile payments process