Last week’s Future Travel Experience conference in London attracted some uninvited guests. As an Air France executive updated delegates on recent progress in the area of permanent bag tags, single passenger tokens and biometric technology – protesters outside the central London conference hotel attempted to underscore the airline’s alleged lack of progress in another.

About half a dozen members of animal rights group PETA (People for the Ethical Treatment of Animals) stationed themselves outside the main doors of the conference hotel early on 3 February, wearing prison inmate costumes and monkey masks. They had brought signs and erected a large cage, which a few of them sat in while others distributed literature. They were trying to raise awareness of the primate abuse that they claim the French national carrier is a regular and willing accomplice to. 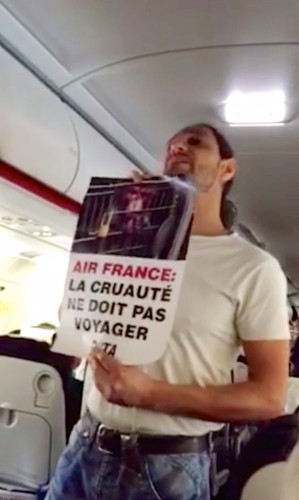 Apparently, these protests have been a proverbial monkey on the airline’s back for some time.

“Air France is the last major airline in the world that continues to ship monkeys and other non-human primates to laboratories and laboratory suppliers. PETA began targeting airlines that transport these sensitive and intelligent animals to laboratories in 2008 as a part of our ‘Air Cruelty’ campaign and began to specifically target Air France in 2011,” Justin Goodman, director of PETA’s Laboratory Investigations Department told RGN. He also suggests that the primates often endure long, multi-leg flights in cold cargo holds directly below the feet of unknowing passengers.

“Monkeys flown to laboratories in the UK and US by Air France often come from squalid breeding farms or are torn from their families in the wild. These animals are crammed into small wooden crates and loaded into the dark, noisy, and terrifying cargo holds of planes on journeys that can last more than 30 hours,” alleges Goodman.

Noting the similarity in the DNA sequence between humans and primates, especially apes and chimps, animal rights advocate Erica Wissolik says that when research animals arrive at their destination, they “live in cages without physical contact, except for the kind that inflicts pain. They never see the outside, their bodies are mutilated, they die unnecessarily of diseases that we already understand and for which research on primates is no longer going to help us understand.”

Since 2011, PETA (which is considered extremist by some) has picketed Air France locations, held demonstrations around the globe, crashed Air France events and conferences and circulated images, videos and print reports that are disturbing and difficult to verify. Just days before the protest in London, a French PETA member boarded an Air France flight and proceeded to walk the aisles with a poster, pleading with other passengers to boycott the airline.

Biologist Dr. Jane Goodall (perhaps the most revered and respected spokesperson for the world’s primate population) joined the movement in May 2014 penning a long letter to Air France – KLM CEO Alexandre de Juniac. “All other major airlines – including Lufthansa, Aer Lingus, China Southern Airlines, United Airlines, Alitalia, Delta Air Lines, British Airways and American Airlines – have made the compassionate decision to end their involvement in this business. I hope that you will take swift and decisive action to do the same,” she wrote. 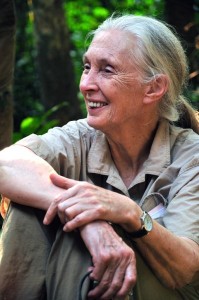 Goodman claims that PETA has repeatedly tried to engage with Air France about this issue without success. This year, PETA became an Air France shareholder. “We’re preparing to present our concerns at their annual shareholder meeting this spring in Paris,” he says.

PETA asserts that a number of other passenger carriers have recently agreed not to continue with the practice of moving primates to testing facilities. “China Southern ended the practice in 2014, China Eastern, Vietnam airlines, Philippine Airlines and United in 2013, and Air Canada in 2012,” says Goodman. “Because passenger carriers are now nearly unanimous in their prohibition of this practice, laboratories are turning to charter carriers to ship monkeys to laboratories. PETA is actively targeting one other small American charter cargo carrier, Air Transport Services Group (ATSG) and its subsidiaries ABX Air and Air Transport International (ATI).”

Though several attempts were made, RGN was unable to obtain comment from Air France for this story. However, in October 2012, the airline’s Paris head office did release a statement in which it said that it visits all its customers to make sure they comply with breeding regulations and conduct research that “is fully in line with current legislation and the regulations drawn up by scientific organizations specializing in animal welfare”.

The airline statement went on to say, “If nothing authorizes an airline from ruling on the merits of using animals in biomedical research… then nothing authorizes it from refusing this type of transport in a perfectly legal way, with particular caution on the part of all those involved.”