Even before its press release about the global state of inflight Wi-Fi hit the news wires last month Routehappy knew that the number of airlines listed as offering some form of connectivity – 52 worldwide – had already moved to the right. “That number has actually increased since the graphic was finalized. The pace at which airlines are adopting Wi-Fi is stunning,” Routehappy data research manager Jason Rabinowtiz tweeted to RGN on release of the original report.

The most comprehensive Wi-Fi database in the world Routehappy identifies flights based on Wi-Fi type. Though it has never publicly defined its methodology, RGN understands that the company gives a “good” rating to lower bandwidth solutions supported by L-band satellite or classic Gogo air-to-ground (ATG) technology because the presence of some connectivity is considered better than nothing. ATG-4, Gogo’s latest generation air-to-ground service, and Ku-band satellite-based connectivity receives a “better” rating due to their ability to deliver better speeds to passengers, while high-capacity Ka-band service such as on offer from ViaSat receives a “best” rating.

Routehappy also identifies flights based on the chance of them including Wi-Fi (“some chance”, “good chance”, or “very good chance”). But we wanted to drill down further and ask – just how many flights are guaranteed that yes, they’ll definitely have Wi-Fi and who provides the underlying technology? While we could probably provide you with some good guesstimates, Routehappy was kind enough to dive into its data to deliver this exclusive break-down for RGN readers.

In the graphic below, updated on 26 February, note the staggering number of flights – 5,646 – where flyers are now guaranteed they’ll have access to at least Gogo ATG. Explains Rabinowitz, “For Gogo, subfleets that are still being converted from ATG to ATG-4 are shown as ATG until a significant portion of the subfleet has been completed. Although many Delta 737s have ATG-4, we show ATG.” So the “yes” figure for ATG-4 is slightly conservative.

Gogo has issued a string of announcements in recent days that show the company is enjoying great momentum in the connectivity space. With a backlog of well over 1,000 aircraft, Gogo is predicting record installs in 2015. This week it confirmed a deal with Delta to fit some 250 narrowbodies with its 2Ku connectivity solution (Delta plans to upgrade its other domestic aircraft to next gen ATG technology when Gogo secures more spectrum), and Gogo yesterday reported that its revenues grew 24% year-over-year to  $408.5 million.

But Gogo is not the only player on the field. As the chart below indicates, Gogo competes with Panasonic Avionics and Global Eagle Entertainment’s Ku connectivity solutions, as well as ViaSat’s and OnAir’s regional Ka and L-band services, respectively (Thales is lead on at least two Ka connectivity contracts involving ViaSat – JetBlue and United Airlines).

Contrary to a Citi Research report issued today – which referred to Panasonic as a ‘new entrant’ in inflight connectivity (and betrayed a staggering amount of ignorance by some Wall Street players) – Panasonic has been providing its Ku-band connectivity to airlines for several years (to Lufthansa, Turkish Airlines, Etihad Airways, and Emirates, to name a few). The largest embedded inflight entertainment company in the world Panasonic remains the fiercest competitor to both Gogo and Global Eagle, as it enjoys linefit offerable status on the Boeing 787, Boeing 777, Airbus A380 and Airbus A350, and has secured 52 airline customers, including some that have not yet been disclosed. During a recent trip to Boeing’s Everett factory, RGN observed Panasonic Ku systems fitted to 787s awaiting delivery to American Airlines, Etihad, Japan Airlines, low-cost carrier Scoot, China’s Xiamen Airlines, Virgin Atlantic, and All Nippon Airways (a new customer).

But judging by Routehappy raw data, Gogo is nonetheless currently driving in the pole position. 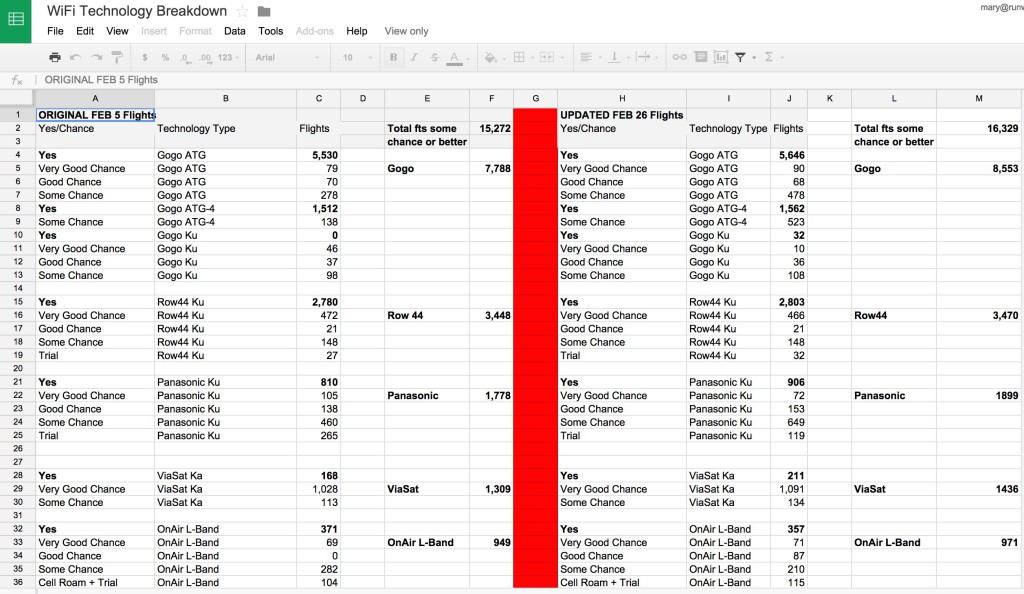