Aircraft seat makers and IFE manufacturers are progressing in their efforts to streamline certification testing of seats integrated with electronics, as they work to shorten lead times during a period of unprecedented demand for aircraft.

At present, the lead times required for bringing integrated IFE-seats to market can take years due to a variety of factors, including the complicated and costly methodologies associated with Head Injury Criterion (HIC) and delethalization (sharp edge trauma) testing, which can contribute to seat delays and ergo, aircraft delivery delays.

Yet the industry in general wasn’t fully ready for these changes. For starters, because seat makers control the design and manufacturing quality of the seat, they took responsibility for ensuring IFE parts are listed in TSO drawings. This required IFE firms to provide reams of data to the seat makers – and reach “working agreements” containing strict NDAs – before integrated IFE-seats could be shipped to the OEMs.

“Hundreds if not thousands of additional data submittals were thrown on top of product parts EDRs, and certification engineers were expected to keep up with response times. The overall lack of tools and the ability to manage data submittals was creating a huge and serious problem – the lack of visibility to what submittals needed attention was causing delays in approval. Delays in submittal approval equal delays in product shipment,” noted Tesken Incorporated president and CEO Debbie Bahrani in an OpEd for RGN last year. “Not only does a delay in data submittal processing place an additional burden of cost on the supplier, but by delaying the submittal process, you delay the shipment. And this does not begin to address the potential cost risk factors due to FAA regulatory compliance mismanagement.”

While the FAA’s advisory applied to American-built aircraft, European seat makers are starting to support the same regimen for commonality of processes with their IFE partners. “We have already done it in our US facility because of the FAA’s guidance there,” confirms René Dankwerth, VP of research and development at seat maker Recaro, which certifies seats according to EASA requirements at its German plant. “We are prepared to implement that, so in case it comes up, it’s not a big thing for us to do it.”

Recognizing that the industry needed a means of documenting the processes required to enact the business changes outlined in AC-21-49, the Society of Automotive Engineers (SAE) – which develops standards for aerospace –  in 2011 issued a paper called “Gaining Approval for Seats with Integrated Electronics in Accordance with AC-21-49”, which provides an industry-recommended framework for establishing agreements to ensure that seats with integrated electronic components – the actuation system, reading light, inflatable restraint, and IFE – meet the seat TSO Minimum Performance Standard.

The document only addressed the TSO attributes of integrated electronic components that affect the seat TSO compliance (e.g. component strength and attachment under static and dynamic loading conditions, HIC, delethalization, flammability, and lumbar loads). And it noted that approval for the integration of the electronics falls, in part or in full, under the type design authority of the seat installer rather than the seat supplier shipping the integrated seat.

The HIC and delethalization changes outlined in the document, in particular, left stakeholders scratching their heads. The industry’s initial response to this SAE-led industry response to AC-21-49 was that of “confusion”, admitted Boeing’s Pruitt in a recent presentation before the APEX Technology Committee in California. He said myriad questions were posed, including: When does a change to an IFE monitor require new seat HIC testing? What if the seat manufacturer says no testing but the seat installer says seat testing needed? And why? What if two seat manufacturers say the IFE change is insignificant, but three say its significant and reject the change?

Methods are being developed to characterize IFE component impact performance separate from seat design, explains SAE. These methods will address both initial seat HIC testing and subsequent IFE component changes. Methods will evaluate head blunt trauma, post-impact sharp edges, and egress impediment. Explaining the rationale for this document, SAE adds, “Currently there are no agreed to evaluation methods, causing differing expectations between seat manufacturers, IFE manufacturers, and seat installers. The default is to repeat expensive row to row seat HIC testing again, which is subject to significant test variation. In addition, there is no consensus as to the level of conformity needed for IFE components used in seat dynamic testing that measures HIC.”

The costs associated with HIC are not insignificant; testing is around $250,000 per seat model based on the number of LOPA [layout of passenger accommodations] configurations (exit row pending pitch, etc…). Typically, for seats pitched at 45″ or greater – the premium class variety – no HIC is required.

“We’re definitely part of that [SAE seat] group, and the idea here is to simplify testing,” Recaro’s Dankwerth tells RGN. “Today, if you have a small change in the IFE monitor, for example, you need to do the HIC testing again, which makes such a minor change [equivalent to] a major change for what you have to do to qualify and certify it. The idea here is to prove that also a simple HIC test only on a component basis can show that the behavior of the new monitor is similar to the behavior of the old monitor. This is the idea behind it. Of course, if we are successful there, and we are pushing that topic together with the other participants, then it will help us to do the kind of changes with much less effort than we have to do today.”

As Thales Avionics VP of product management Lori Salazar previously explained, “The HIC test [currently] either passes or fails based on a number above or below 1,000 based on the automotive industry standard which can vary by a lot (sometimes 500 or more) each time a test is run. We’re challenging the accuracy of this test based on the varied results with the identical setup. The number needs to reflect only the seat structure (no IFE variables) thus we want to isolate IFE testing from seat testing. We can do this via IFE compression or other tests to validate the energy absorption will be similar before and after changes and thus won’t affect the HIC results. It’s a new method of compliance which will save a quarter of a million dollars every time we have to run a new seat test.” 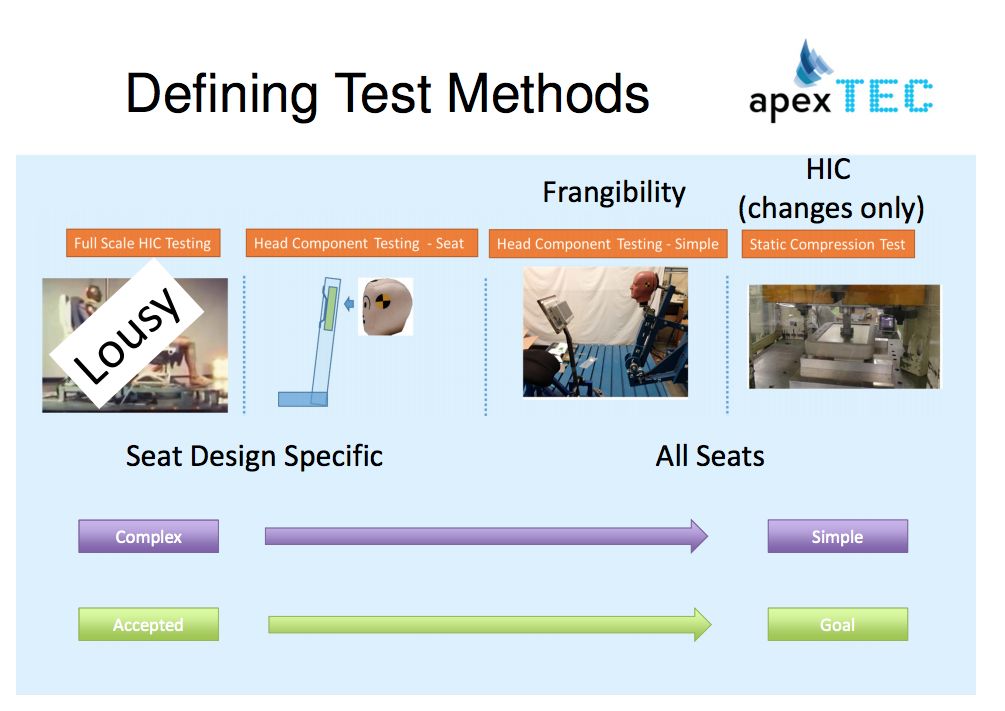 A Boeing graphic that explains the proposed changes.

The “subjectivity” surrounding whether a seat gets a “pass” or “fail” extends to delethalization. There is an interest on the part of IFE vendors to promote using surrogate parts versus expensive production parts once they do their own tests to prove that passengers won’t be impaled by sharp edges. Subjectivity also exists in how to define emergency egress (tripping hazard). For instance, one OEM may say a test passed, while another will say it failed based on defining tripping as including a potential “slipping” hazard from a smooth surface.

Having made progress in their work the SAE Seat Committee is focused on finalizing the document, “Methods to Evaluate Impact Characteristics of Electronics Integrated Within Seats”, which has been labeled SAE ARP 6330.

“From my opinion, one of the biggest issues we currently have is lead time of seats and IFE, and if you streamline all of the certification and modification, reduce the effort for testing and documentation, it would be definitely a big [positive] for the complete industry … because this is one of the biggest hurdles we have to fulfill the requirements of customers – getting aircraft seats and IFE to fill market needs currently. All of the parts of this group are focused to work together to get a better result in the end,” says Recaro’s Dankwerth.

Meanwhile, a growing number of US lawmakers are pressing the FAA to move more quickly in certifying onboard products. As reported by Roll Call, House Transportation and Infrastructure Committee Chairman Bill Shuster opened a recent hearing about the FAA’s certification methods by complaining that some of what the agency does “seems to be process simply for the sake of process.” Products and technology that can make aircraft safer “are often caught in a bureaucratic maze,” he is reported as saying.

I doubt there is an aircraft interiors or IFE stakeholder out there who would disagree.