US airline JetBlue is hoping to persuade passengers to take a chill pill and avoid air rage in-flight with the first in a series of short comedy videos it’s calling Flight Etiquette.

The shorts, which feature improvisational comedians affiliated with New York troupe Upright Citizens Brigade, are an amusing mix of “we’ve all been there” and “thank goodness that didn’t happen on my flight”.

“With Flight Etiquette, we are recognizing that there are certain behavioral nuances that’s unique to the air travel experience, especially amongst strangers. We love promoting a collaborative environment for our customers and crewmembers. Having happy customers onboard who expect to have a comfortable and relaxing flight also really helps build a spirit of cooperation for everyone,” JetBlue brand analyst Chan Tran Huth explained to RGN.

The first video, which JetBlue calls ‘How Not To Take A Nap’, shows a an aisle seat passenger falling asleep on the middle seat passenger next to him (who oddly enough fails to move to the empty window seat next to her).

The second, ‘How Not To Make An Exit’, shows a window passenger drinking a half dozen beverages and then attempting to climb, vault and squeeze over the two people in the middle and aisle seats.

While the videos are amusing, they haven’t yet gone viral, at least at the time of writing.

JetBlue, of course, still offers some of the best #PaxEx in the domestic US, with seats over 18 inches wide across its fleet, and standard economy pitched at 33 inches on new Airbus A321s and refitted A320 aircraft, 34 inches on older A320s, and 32 inches on the middle-seat-free Embraer E190. As Huth puts it, “with the most legroom in coach, you really are less likely to get upset at the person reclining their seat in front of you if they can actually recline their seat without it being in your face.”

Yet it’s hard not to feel like the videos are a bit of a missed opportunity to raise public awareness. There are lots of situations on the aircraft where etiquette and inflight behaviour is a little murky, and where frequent travellers and occasional flyers might have differing expectations.

When and how should you recline your seat? Who gets the middle armrests in a three-seat pair? Should you put your feet on the bulkhead or seat in front? How can you slip out from a window seat while causing passengers around you the least inconvenience? Where should you change your kid’s diaper? Which seats should passengers who are intending to stay particularly hydrated on board choose? Where should you stow your bag?

RGN asked JetBlue’s Huth if the airline had plans to suggest ways to set expectations and encourage passengers to be more polite rather than less impolite.

“First and foremost, we want our audience to simply find the videos humorous and entertaining. We also want our viewers to feel that they can totally relate or say they’ve been in that situation before, and we hope to encourage engagement by having them tell us what they’d do in these awkward situations. We’re not telling what’s the correct way to behave, but rather asking how they would react to these certain situations. If we can tell those stories that encourage conversation without being preachy, we’re certainly ready to do so,” Huth said.

“Look forward to more of the series throughout 2015 on our social channels,” Huth promised. “Our goal for the videos is to have some light-hearted fun, so we’re careful to pick topics with that spirit in mind.”

Sure, the videos are amusing, but could the talented JetBlue marketing team and the Upright Citizens Brigade figure out a fun way to actually make passengers more polite on the plane? 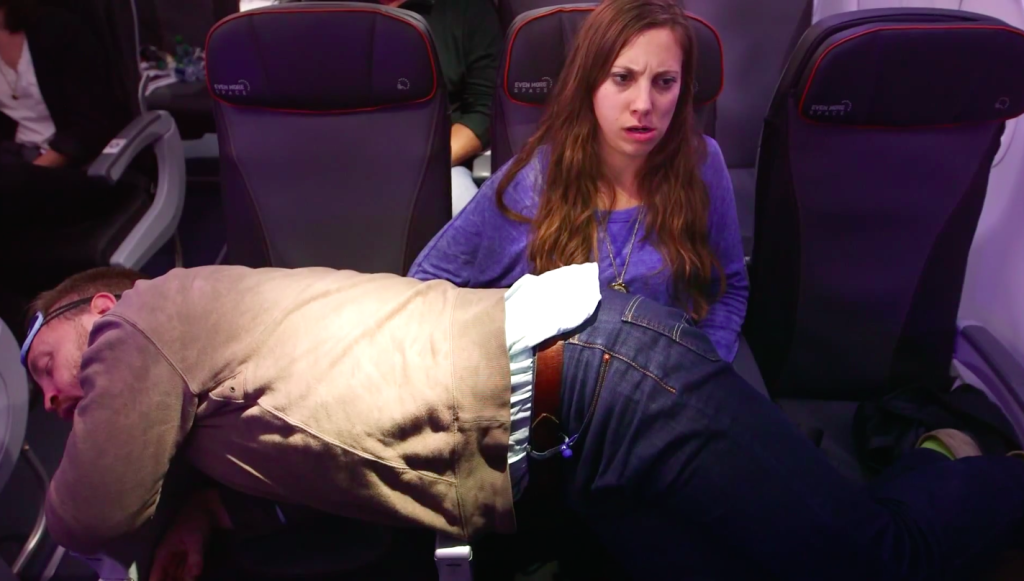