A well-placed senior source within a major US international airline tells Runway Girl Network that the carrier is in advanced preparations for a rebrand of its domestic first class recliner product.

In order to guard the source’s anonymity, RGN will refer to this rebranded product as “New Recliner” class.

RGN’s analysis is that the move would spur new onboard hard product offerings among the big three US international airlines, and bring several advantages to the first-mover airline.

First, New Recliner would increase the consistency of its narrowbody fleet branding, which currently are presented differently depending on whether they are operating within the United States (first class) or internationally (business class). 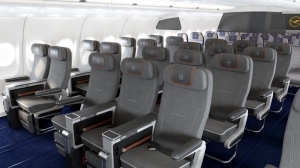 Second, New Recliner would enable the airline to enhance the distinctiveness of its international business cabin, a product which is a significant focus of all three major US airlines. Management at all these airlines are devotees of a business-first option internationally: the dominant players in the mergers at American-US Airways and United-Continental, and both pre-merger airlines at Delta-Northwest, offered a business class product at the top of their range.

Third, and perhaps most exciting for the non-elite traveler, the introduction of New Recliner on international flights would allow the airline to be the first US carrier to market with a full Premium Economy product, while preserving the separate international business class seat. All three US airlines currently offer only an extra-legroom economy product between their fully flat business cabins and increasingly dense economy seats, while an increasing number of international airlines — both partners and competitors — offer recliners in premium economy.

Fourth, New Recliner would allow the airline to press the reset button on passenger expectations in domestic first class. Domestic first is currently under pressure both from low-cost carriers like Spirit’s Big Front Seat recliners (where the only difference from economy is the seat) and Allegiant’s 757 first class product (which is the result of FAA crew rest regulation requirement changes), as well as from premium carriers’ increasing interest in monetizing domestic first so premium cabins are not primarily a complimentary upgrade perk for frequent flyers.

Fifth, as a result of the “reset button”, airlines could potentially change the class of service structure they pass to global distribution systems, with which they are sporadically (yet perennially) in conflict. Airlines’ existing successful — and, indeed, lucrative — extra legroom economy products don’t always have full visibility in the GDSs, while Premium Economy services are. The juxtaposition of a connecting flight in domestic first and international business could also be streamlined. 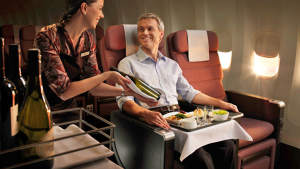 The “reset button” would be particularly significant in the context of airlines reducing pitch on their current domestic first class product with newer slimline designs (slimline: not just for economy!) and looking for fare bundle flexibility.

Currently, domestic first class as a brand still carries a significant luxury halo with it from the golden age of flying. Resetting passenger expectations for 2014 rather than 1964 could well allow airlines to reduce costs, particularly on the soft product side. All three US airlines have recently been experimenting with just how far the market is content for them to reduce meal servings, with American discovering that passengers felt its recent combination of distance and time windows was not sufficient for a domestic first class product.

The question is, how far would that change for a new class of product branded New Recliner? And how would elite frequent flyers react?

Following the introduction of New Recliner, the future competition landscape among the big three might look like:

While the implementation and switchover period is likely to drive uncertainty among passengers — frequent flyers keen to understand what the payback will be from their loyalty, and paying first class passengers who want to know what bang they’ll get from their buck — RGN’s conclusion is that the move is likely to be a beneficial one in the long term.