NEW YORK: For the rare few that might have leftover Halloween candy on hand consider this – one man’s conviction to lift the spirits of children in war-torn Berlin resulted in pilots conducting operations during the Berlin airlift and dropping more than 23 tons of candy across the city.

Now famously known as the “Candy Bomber,” the “Chocolate Flyer” and “Uncle Wiggly Wings” for shaking his wings over Berlin Tempelhof as a signal for kids to look for the candy attached to parachutes fashioned from handkerchiefs, Gail Halvorsen is an aviation legend whose passion for both piloting and the Air Force’s core value of “service before self” still burns bright at 94 years old. 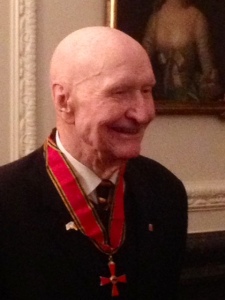 But Halvorsen also has a strong belief that women should have the same opportunities in piloting and the aviation business as men. “It is an exciting field, it doesn’t matter what gender you are…just get a hold of those controls,” he tells Runway Girl Network. “There is no reason why young women can’t get out there and get a pilot’s license and see how you like it.”

Halvorsen also recalls that he studied with a number of women at the University of Florida when he was obtaining a masters in aeronautical engineering in the late 1940s and early 1950s. “Women can do it just as well as anyone. Guys don’t have it cornered on how to do it,” says Halvorsen.

He also stresses that women were ferry pilots during World War II and Ameila Earhart “was my hero”.

After concluding the sometimes harrowing missions during the Berlin airlift, Halvorsen and his wife Alta built family that included five children, 24 grandchildren and seven great grandchildren. One of his sons is a captain for Delta Air Lines and he also has a grandson in the aviation business.

But Uncle Wiggly Wings also says he has “several granddaughters who are interested in becoming pilots”.

In an interesting twist of fate, Halvorsen married his high school sweetheart Lorraine Mitchell after Alta passed away, and she tells Runway Girl Network the two recently took a flight where both pilots were women. “It was a very good landing, they [women] know how to do it,” Lorraine says.

Halvorsen’s latest honor is receiving the Lifetime Achievement In Excellence Award from Lufthansa for his compassion that eased the suffering of many Berliners during a time when “not only their country was divided, but their city was divided,” said Lufthansa VP of the Americas Juergen Siebenrock during an event to celebrate Halvorsen in New York. “You were basically helping your former enemy recover and survive.”

The Candy Bomber also broke with Air Force protocol during his initial flights that dropped candy to Berlin’s children. While Halvorsen is not an advocate for rule-breaking he does believe that “at some point the occasion might be so important..I did take a chance…when you saw the look in the kids eyes, just when they got the smell of the wrapper, you knew you had to do something and it was not going to hurt anybody.”

Halvorsen’s commanding General William Tunner saw coverage in the press of the candy drops during the Berlin airlift before his Colonel in charge at the time. As his Colonel called him to discuss the drops, Halvorsen recounts, “I thought I was going to get court martialed.” But the General advised the Colonel, “Don’t chew him out. Let him keep doing it. The General saved my career.”