Boeing famously exited the service side of inflight connectivity when it shuttered its Connexion by Boeing unit at the end of 2006. The airframer’s exit from the market created opportunity for a variety of companies to fill the void left by Connexion, which boasted Lufthansa and other airlines as customers. Now that connectivity has come of age, and aircraft e-enablement is on the tips of the tongues of even airline bean counters, we’re naturally curious if Boeing would ever get back into the game.

“I don’t envision getting into the service business again,” says Boeing director of business development for wideband communications systems Jerry Hopp, who previously worked as government sales director for Connexion.

Boeing is, however, supporting the colossal activity surrounding aircraft connectivity in other ways. Its Boeing Defense, Space and Security division has been selected by Panasonic Avionics to build the IFE giant’s new phased array Ku-band antenna. But how will this low profile antenna be different from the original phased array antenna for Connexion (which wasn’t adopted commercially but is still flying on Air Force One)?

“In a nutshell, the technology, the electronics and the electronic packaging is much more sophisticated now and we’re able to do different kinds of packaging and layers to combine transmit and receive antennas into a single mount LRU, whereas under the Connexion days, this was not possible,” Hopp explained to RGN in an interview.

“This is third generation technology [that has developed] over the past 15 years so it’s a very different design than what was offered in Connexion days. The fundamental physics haven’t changed; these planar antennas have the same limitations whether our old technology or new Panasonic [system],” says Hopp. Panasonic suggests that a 20° elevation – approximately 55° north or south – is the limit at which the new system will be viable.

Making the antenna affordable is key. “Cost – that’s part of what we’re also driving out with the new design with Panasonic,” says Hopp, noting that the antenna will be “significantly less cost”, for instance, than a separate new hybrid Ka/K-band antenna now being pitched by Boeing Defense, Space & Security to both “military and commercial customers”, and which will be delivered to Yahsat of the UAE. 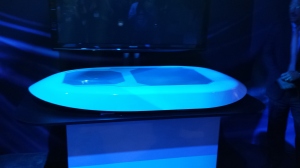 Boeing IP will be part of Panasonic’s phased array antenna

For Panasonic’s new Ku phased array antenna, the Boeing unit will “design under contract” to meet Panasonic’s performance and cost objectives. To be clear, says Hopp, “Panasonic is our customer. We’re not selling this antenna in the market. We’re designing it and building it for them. They will offer it to the commercial marketplace. We’re a supplier to them, designer and teammate to them in some ways on this antenna system. We’re not competing with them and certainly not launching any competing services. They looked at the industry, evaluated their options and down-selected Boeing based on what we’re able to do for them.”

Hopp likens the arrangement to Gogo’s agreement with ThinKom for its low profile 2Ku antenna, noting that Panasonic simply “happened to go to Boeing Defense, Space & Security” for its phased array antenna.

Asked if Boeing would partner with other Ku-band inflight connectivity providers in a similar fashion, Hopp says, “Right now we have signed a sole license agreement with Panasonic on this product offering, the Ku antenna system. And I believe that would be the case for the foreseeable future. If someone else wanted us to have us design or develop an antenna similar or in a different frequency band, we would certainly listen to that discussion but there is no engagement or an option like that today.”

We asked Hopp if this arrangement will give Panasonic a leg up over the competition. Panasonic’s current Ku connectivity system is the only Ku system linefit on a number of Boeing types, including the 787. Virgin Atlantic, for instance, today confirmed that Panasonic is providing Ku connectivity on its Boeing 787, even though the airline picked Gogo to supply 2Ku to its existing fleet. In other words, would Boeing Commercial Airplanes be more inclined to install a Boeing-built antenna on Boeing jets?

“For all questions regarding anything with Boeing Commercial, we’re not engaging on it. We’re a supplier, in this case, a technology supplier to Panasonic. Those decisions with Panasonic and Boeing Commercial will be made by those two organizations, and Boeing’s position is and always will be, ‘We will support the customers’ desires, whatever service or antenna system. Some may be offered in-line; some will not, but at the end of the day Boeing will support their customers’ preferred technology solution,” says Hopp.

RGN Premium: Too many variations of one standard

Why air travel is still special despite the headaches