EVERETT: As Gulf carriers scramble to one-up each other to create the most opulent and well appointed aircraft interiors, Etihad Airways this week rolled out its first Airbus A380 and Boeing 787-9, sporting the airline’s new “Facets of Abu Dhabi” livery. As lights and music set the scene for the carrier’s first 787-9 to roll out of the paint hangar in Everett, Washington, Etihad Airways Chief Commercial Officer Peter Baumgartner spoke candidly about the selection process for the airline’s next generation interiors, the limitations of Boeing’s 787-9 catalog, and the carrier’s competitors.

Etihad is not an airline known for having a middle-of-the-road product. Recently revealing its “Residence” concept for the A380, Etihad is taking the interiors space to new extremes. However, the airline found it difficult to match its products on Boeing aircraft to those found on its its highly customized Airbus counterpart. 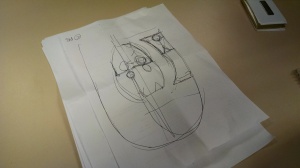 Etihad’s First Class cabin will have a curved aisle.

“The aircraft initially was meant to be a catalog aircraft. Boeing was very serious about it,” said Baumgartner. “For us, that was not good enough.”

“It was at the same time that we had access to the [787] catalog when we knew what we [would] do on the A380. So we looked at the catalog and said, ‘Ok, let’s look further, there must be something to come.’ It was the end of the catalog and we said, ‘Goodness, this is not a good catalog.’ It’s not a catalog that allows us to do what we want to do.’ And we started a challenge. It was tough conversations with Boeing,” revealed Baumgartner.

During the design process, Etihad conducted targeted market research that it called ‘Etihad Big Talks’, where “we locked these people over two days into kind of a Big Brother house”, said Baumgartner. This helped the airline study the habits of passengers and translate it into inflight products. “I can’t think of a single innovation on board that aircraft that wouldn’t have been derived either directly or indirectly from these research forums.”

Baumgartner says it took the development team at Etihad six-and-a-half years to go from the early research stages to delivering conceptual designs and mock-ups, refining ideas, industrial design, and finally manufacturing of the product. With a lifecycle of about seven to eight years, the product had to be continually updated throughout the process.

For its 787-9, Etihad has chosen a “curved aisle” for its First Class cabin, which is a design well beyond anything found in the Boeing catalog. The concept, which was quickly drawn up by Baumgartner at the rollout (see right), curves the aisle around the First Class suites to maximize shoulder width at each seat.

Etihad has clearly opted for a highly specialized aircraft interior, but other airlines have struggled as of late to have their products delivered to specifications and on time. Qatar Airways pushed back the delivery of its first Airbus A380 several times due to what is believed to be minor imperfections with the interior. However, Etihad management takes such constraints in stride, as they come with the territory of being innovators.

“If you push the boundaries as we do, that will always be a challenge,” Baumgartner said of the aircraft interiors and inflight entertainment supply chain. “We have never been naive to assume it will be a walk in the park. This is a challenge, and each time when you face a challenge, you mitigate the risk and make sure that you keep track with committed timelines. So everyone who is involved in an aircraft is committed to keeping timelines….I am confident, absolutely, we are very close.”

As the Gulf carriers continue to one-up each other, European and American carriers have not seen the need to develop “me too” offerings. Rather, they’re seeking to meet the needs of their unique customers. “I think there are carriers all around the world who are doing smart stuff so it’s not about over-obsessing about any particular set of competitors,” said British Airways head of product and service Kate Thornton at the Future Travel Experience Global 2014 conference last week in Las Vegas.

Responding to a question from RGN about whether BA feels pressure from Gulf competitors to offer more lavish accommodations, Thornton said that while BA obviously pays attention to the competition, the carrier’s focus is on listening to “what our customers are saying”. American Airlines managing director of onboard products Alice Liu agreed, noting that travelers from different regions require a “different type of service and product” and it’s imperative for American to understand its passengers’ requirements.

Meanwhile, when asked if carriers from other regions can possibly keep up with Etihad’s new products, Baumgartner’s answer in Everett was clear: “I hope they can’t….I hope they are all competitive because it makes us try even harder and get even better. We are very interested in competition, and are very happy for anyone who tries to take us on. We are very ready for the future.”