Last week, Andolino’s plate was almost overflowing as she welcomed some 3,000 international aviation representatives to the 20th anniversary of the International World Routes conference, which brings airport and airline officials together in a single location in an effort to forge new business relations. 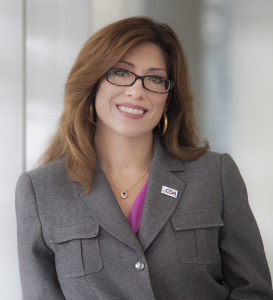 After graduating from DePaul University, Andolino began working for the City of Chicago. Working her way through the ranks, she became First Deputy Commissioner of the city’s Department of Planning and Development, where she oversaw a $100 million land acquisition, and capital investments. She eventually became director of the $8 billion O’Hare Modernization Program. This involved regulatory compliance, financing, design and construction, which resulted in the opening of two new runways, a new air traffic control tower and the extension of an existing runway.

Throughout her career, each position served as a stepping stone for the next.

“Having a diverse skill set is essential to this job,” says Andolino. “It takes vision, leadership and management skills, the ability to recruit a bright, talented team, and a willingness to collaborate with others to bring a best-in-class experience to our customers.”

Andolino grew up in Elk Grove Village, under the flight path of O’Hare. In that sense, she has always had a close relationship to aviation. “My brother is a pilot, flight instructor and an all-around aviation aficionado, and I enjoy flying with him. I enjoy traveling in general and have spent time in a flight simulator,” she says.

A top priority of the job is ensuring the safety of 87 million people who pass through O’Hare and Midway. “Potential security threats in an ever changing world keep me up at night,” she says. The CDA works together with more than 35 federal, state and local partners to monitor and evaluate potential threats. At the same time, the CDA is in the business of customer service and [needs] to provide a good experience at the airport.

“To accomplish that, we try to anticipate the needs of all travelers – whether it’s a business or leisure traveler, an international traveler, a family or a passenger with special needs,” says Andolino. “This is less of a challenge for us and more of an opportunity.”

Key to the industry is the ability to serve the needs of the customer, while engaging the stakeholders and the community at large. “Most of all, this business is 24/7 so you must be passionate and enjoy what you do,” she adds. “Lastly, be prepared for social media and technology to continue to transform the future of the industry. Make sure you’ve got the necessary tools to prepare for it.”