Within a week of the FAA’s release of strict new clarifications on how it defines banned commercial drone operations, NASA and Rockwell Collins publicized their own groundbreaking work to enable robust drone-to-ground operator communications. Though at first look, the NASA-Rockwell Collins work to create an entirely new data link waveform expressly for unmanned aerial systems (UAS) might seem to fly in the face of the FAA’s apparent case of drone disgust, the distinctions between small UAS and everything bigger create a swift change of mood.

While FAA’s interpretations of “hobby or recreational purposes” would seem to nip loophole-finding businesses like Amazon’s Prime Air in the bud, the FAA’s Steve Van Trees is a co-chair of RTCA Special Committee 228, a federal advisory committee dedicated to giving the FAA basis to certify UAS commercially. 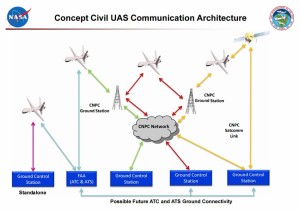 Jim Griner, electrical engineer and NASA Glenn Research Center point of contact for UAS NAS (National Airspace System) access, says the Rockwell Collins-NASA team is working with the industry and the FAA directly through Special Committee 228. And everyone’s very excited about it.

“It’s not often that you get to do a new aviation communications system and, I mean, we’re still using AM voice for communications with aircraft right now. This is a new system, brand new, a highly modern type of system for allowing communications to these unmanned aircraft,” says Griner.

Van Trees’ co-chair on the project is Rockwell Collins principal systems engineer John Moore, who points out that Van Trees is the head of the communications certification branch for the FAA. “The work that we’re doing isn’t really involved in the small UAS rule. [It] has more to do with the larger aircraft,” says Moore anything from 55 lbs to 35,000 lbs.

Indeed, the FAA expressly identified data link and sense and avoid as the areas needing work to reach a UAS standard. The FAA’s Roadmap for Unmanned Aircraft outlines the timeframe expected from Special Committee 228 — minimal operating performance standards due July 2015, a finalized set in July 2016 and the final verdict back from the FAA in 2017. 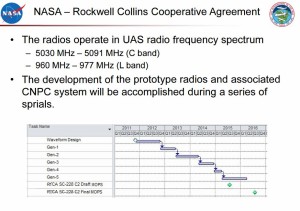 Last month in Cedar Rapids, Iowa, the team put their system in the air on NASA’s S-3 Viking research aircraft to test for an upcoming second “spiral” test. Spiral tests are used for systems without predetermined functional requirements that are going through a continuous improvement process. “This is not an existing network … this is a new waveform that could be point-to-point communication,” says Moore, adding, “The business case for how it evolves is still a little bit up in the air.” However, ways to safely operate unmanned systems to provide public safety enhancements and agricultural solutions are certainly being mulled.

NASA and Rockwell Collins’ work began two-and-a-half years ago when Griner determined that no existing waveform was robust enough to support UAS data link needs. “If you think about it like an ACARS message … if [the pilot] doesn’t get the message, he can still control the airplane,” Moore says, pointing out that the data link NASA and Rockwell Collins are at work on has no human fail-safe in cockpit. If it ever fails, the 55 pound-plus aircraft loses control. It has to be hacker-proof as well, insuring that only the intended pilot can take control from the ground if link is lost.

As to whether they will make the July 2015 deadline, Gruner sounds confident. “We actually accomplished the testing on Tuesday that we were expecting to accomplish on Wednesday … we were pushing the fringes of the system to get more data to help us with understanding how it’s working and if it needs to be tweaked.”