Working in collaboration with its inflight Wi-Fi partner Gogo, Delta Air Lines has launched a first-of-its-kind wireless IFE experience that is expected to ultimately help usher in a new era of customer relationship management (CRM) in the air.

The so-called Delta Studio product will stream a variety of television shows and movies to passengers’ own Wi-Fi enabled devices, including laptops, Android or Apple tablets, or iPhones. Delta passengers and close observers of the inflight entertainment industry will note that Delta has offered the Gogo Vision wireless IFE offering for years. So what’s so special about today’s announcement?

Beyond the fact that Delta will offer some streaming content for free to passengers traveling on any domestic Delta or Delta Connection two-cabin aircraft equipped with Wi-Fi, the launch of Delta Studio represents a restructuring of Gogo Vision for Delta, and puts control of how the service looks, feels and is marketed into the hands of the airline. 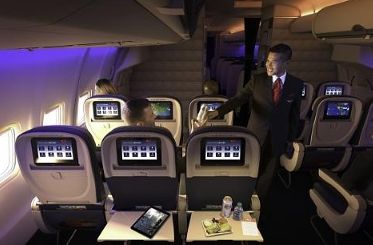 Free entertainment options are available on flights with seat-back entertainment systems or on demand video streaming onboard Delta’s Wi-Fi-equipped aircraft.

Delta Studio will also enable the carrier to better customize the entertainment experience for passengers. When passengers launch their browsers in-flight, they will be automatically directed to Delta Studio, which will ask for their name and seat number. Delta Studio will integrate with Delta’s flight records through an API that offers specific kinds of content for that particular passenger, says Gogo. So, for example, a premium passenger – including those flying Economy Comfort – will receive the entire content catalogue for free, whereas economy passengers will have access to some content for free and some premium content for purchase, such as HBO and SHOWTIME programming. From this portal, passengers will have the ability to buy Gogo Wi-Fi as well.

“Delta will take over this [Gogo Vision] product and make it whatever they want, but we’re also creating CRM tools to target passengers at the seat level, which as far as I know, nobody has done before. It means they can have one-on-one relationships with their passengers [in-flight], and offer different services within different classes of service. However they want to do it now, they can do it,” Gogo chief commercial officer Ash ElDifrawi tells RGN.

Tailoring offers and perks for frequent flyers, and personalizing the onboard dining experience, are just a few of the ways this technology could be used in the future. The applications for this are only “limited by your imagination”, says ElDifrawi “It’s based on the appetite of the airline. All of that is definitely on the roadmap for airlines to deliver. And we’re seeing a lot of carriers very interested in that. It’s all in play…for Delta this [streaming video announcement] is the first step.”

Tim Mapes, Delta’s senior VP – marketing, says, “Delta continues to be driven by customer feedback which has consistently placed the desire to be entertained at the top of the list of ways to improve our customers’ time in the air.”

But Delta Studio also marks an important shift in how Gogo builds and delivers its products. The company’s goal is to provide the underlying technologies that enable its airline partners to create customized experiences for their customers, and it is now willing to play a more behind-the-scenes role when appropriate.

“When we first started this business, in order to get it going, we had to almost create our retail model. There was no airline that would say ‘I’ll buy megabytes from you and some unproven technology’ so it was incumbent on us to have a relationship with the airline customer, prove out the demand and the technology, and then once that would happen, we knew we would hand airlines the product both organizationally and operationally, and we’re at that tipping point now,” explains ElDifrawi. “It makes sense to hand that customer relationship over to the airlines and become a provider.”

While Gogo will continue to offer its ‘off the shelf’ Gogo-branded Wi-Fi and Gogo Vision wireless IFE solutions as an option for airlines, some carriers will elect to take fuller ownership of the brand in a similar vein to what Delta has done. “Some airlines don’t have the resources or appetite or the scale to invest in this. Delta has invested in an e-commerce platform [which leverages Gogo Vision]; others want a check at the end of the month, and say Gogo can ‘take care of it, minimize my expense and we’re happy with the revenue share’. I can guarantee you that there are a healthy number of airlines that want to do both.”

Even so, Gogo is repositioning its brand, and moving more into the B2B space, which is certain to raise eyebrows for at least some investors. Asked if Gogo is concerned about losing its own brand recognition in the process, ElDifrawi says, “Think about Oracle, Intel, great companies who play very powerful platforms in B2B roles. I think it will give us a bigger role as more airlines want to do this. Having passengers as a customer is one thing, but having airlines as the customer sets the bar higher; this is a huge opportunity and the evolution of where this business is going.”

A lot of work must still be done from a brand positioning point of view, he adds, “but this also allows airlines to own this product more and more in a seamless sort of way. Delta Studios is a great example of that.” New connectivity/entertainment packages are also being closely studied. “It’s all in our minds that it’s inevidable, bundling these parts together. Most of airline partners have activity have Gogo Vision domestically an most international partners will have both, so clearly the conversation about bundling is coming up.”

Gogo will, however, retain its strong presence on social media. “Airlines see social media as a phenomenal advantage. We’re the only [IFEC] company that does live chat in the air.”