It is great to see that improving the passenger experience (#PaxEx on Twitter) is now a genuine priority for pretty much all airlines, which are no longer in any doubt as to the importance of meeting the ever-increasing demands of their customers. Onboard connectivity solutions, the rise of Bring Your Own Device, wireless inflight entertainment (IFE), multi-room onboard premium suites, tablet-equipped cabin crew, wearable technology and inventive cabin design are all contributing to an ongoing revolution in the inflight space. And it’s not just the legacy carriers that are setting new benchmarks; the trend is equally apparent among low-cost airlines. 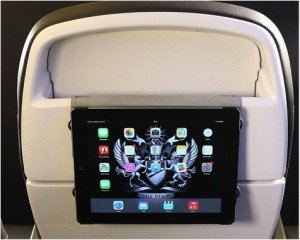 You don’t have to look too far for examples of significant, passenger-focused investment. In the US, American Airlines is working to create a “life uninterrupted” experience onboard, and Delta is spending $770 million between now and 2016 to improve passenger comfort on 225 of its domestic narrowbody aircraft. Across the Atlantic, British Airways has earmarked £5 billion (approx $8.5bn) for new products, aircraft and technology – the carrier has just revealed plans for a “radical overhaul” of 95 of its short-haul aircraft cabins and is set to be a launch customer for Inmarsat’s recently announced pan-European integrated satellite/air-to-ground (ATG) network.

Then, on the low-cost front, Norwegian Air Shuttle is upping the ante with a comprehensive embedded IFE and onboard wireless offering on its transatlantic flights, following the launch of low-fare, long-haul services. Each of these organizations – BA, Delta, American Airlines and Norwegian – will be sharing more on their passenger-focused plans at FTE Global 2014, which will take place in Las Vegas from 24-26 September 2014, where Runway Girl Network will also lead the Cabin Integration Symposium.

It’s no secret that air travelers today are desperate for reliable, high-speed Wi-Fi, but the ‘e-enablement’ of aircraft goes far beyond allowing passengers to access their emails, Twitter and Facebook on their smartphones, laptops and tablets. 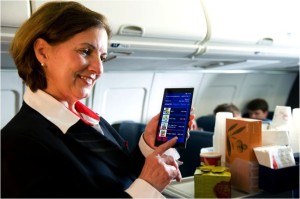 Some carriers, including the likes of Delta, are leveraging connectivity to empower their flight attendants by equipping them with personal, connected devices. These are already proving to be effective point-of-sale devices, but when airlines get a real grip of Big Data, the capabilities will be taken to the next level with true personalization helping to both improve the passenger experience and drive in-flight ancillary revenue generation. Nose-to-tail maintenance and flight tracking systems are also in line to benefit from e-enablement.

The promised improvements in onboard connectivity to be brought about by the likes of the Inmarsat’s Global Xpress constellation, AT&T’s forthcoming 4G LTE-based service in the US, and Gogo’s 2Ku service, among others, will also undoubtedly have a central role to play in revolutionizing the inflight connectivity market. The ‘Up in the Air’ conference at FTE Global 2014 will again provide a platform for these key topics to be debated in greater detail.

Among the other new technologies that are either at the forefront or on the periphery of most airlines’ thinking is wearable technology, which is gaining real traction as a powerful tool for the travel sector. We’ve seen a number of uses on the ground – for instance, Virgin Atlantic has used Google Glass and Sony Smartwatches in the Upper Class Wing at Heathrow to meet and greet premium passengers, Copenhagen Airport has also trialled Google Glass, and Vueling, airberlin and Iberia have developed smartwatch boarding passes. 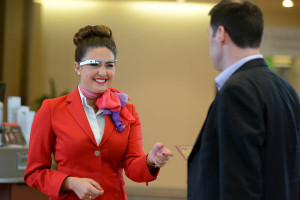 Interestingly, though, Chinese low-cost carrier Spring Airlines has become the first airline to trial Google Glass onboard to see if it can help improve inflight customer service. It may have only been trialled so far on a flight between Shanghai Hongqiao and Chengdu, but as more and more stakeholders pilot the technology, the likelihood of seeing it rolled out more widely across the industry is increasing on an almost daily basis. Runway Girl Network is looking forward to hearing what Droiders, Virgin Atlantic, SITA and Vuxiz have to say about the future of wearable tech in travel in the FTE Wearable Technology Forum. With airlines, airports, industry suppliers and global technology giants all making moves in this market, it is certainly an area to watch with interest.

With so much going on and so many potentially game-changing technologies emerging in the onboard sector, it’s an exciting time for the industry and for its customers, who have come to demand a vastly improved travel experience. Airlines that bury their head in the sand and ignore the advancements in areas such as onboard connectivity, the wider benefits of the e-enabled aircraft, wearable technology, wireless IFE and so on are running a real risk of being left behind.

So, what are you doing to improve your passenger experience? There will be no shortage of ideas for you to consider at Future Travel Experience Global 2014, which will take place from 24-26 September 2014 at the Mandalay Bay Resort in Las Vegas. In addition to the FTE ‘Up in the Air’ and ‘On the Ground’ conferences, the event will play host to the Cabin Integration Symposium (led by Runway Girl Network), an exhibition of the latest passenger-focused products and services, the 4th FTE Awards and an exciting social program. For more information, visit: http://www.futuretravelexperience.com/fte-global/.

Airline start-ups in The Americas – who’s got a chance?

ViaSat agreement with Eutelsat is also a gain for Thales