Eutelsat and ViaSat’s new agreement to stitch together regional Ka-band services to support inflight connectivity bodes well for Thales, which is partnered with both firms to bring high-capacity connectivity to airlines in the United States and Europe through its recent acquisition of JetBlue Airways subsidiary LiveTV.

JetBlue is rolling out ViaSat’s Exede service across its Airbus A320 fleet; likewise, United Airlines is equipping some 200 Boeing narrowbodies with the service. Crucially, however, Thales’ new LiveTV unit is ‘prime’ on both contracts, meaning it holds supplemental type certification (STC) to equip the aircraft, and indeed – together with ATS in Washington – LiveTV is fitting the Ka system to JetBlue and United aircraft.

On the other side of the pond, LiveTV – and thus now Thales – is also prime on both the Aer Lingus and Vueling contracts won by LiveTV; these will be powered by Eutelsat’s high-capacity KA-SAT satellite plus ViaSat SurfBeam technology.

The pioneering agreement announced earlier today by ViaSat and Eutelsat will enable the firms to roam on each other’s high-capacity satellite networks (KA-SAT for Eutelsat in Europe and ViaSat-1 for ViaSat in North America). It also includes provisions for future satellites and follow-on technologies as they complement current Eutelsat and ViaSat High Throughput Satellites (HTS), including the forthcoming ViaSat-2 satellite, which will launch in 2016.

But even when ViaSat-2 launches in 2016 and provides coverage over the high-trafficked North Atlantic, ViaSat and Eutelsat will face a gaping hole in the Pacific. When Risse gave his presentation, he said the firm was not likely to launch a “real HTS” satellite over the Pacific because “if you don’t have a market there, you will not launch this satellite”. But that was before Eutelsat was selected by Panasonic Avionics to support the firm’s Ku-band satellite supported inflight connectivity solution via the Eutelsat 172B satellite that will feature multiple user spots “optimised to serve densely-used Asian and trans-Pacific flight paths and interconnected to gateways operating in the Ka band”. The satellite is scheduled to launch in 2017. 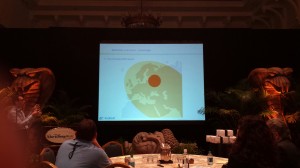 This makes the debate over “Ku versus Ka” all the more interesting, or humorous, depending on where you sit in the value chain. These days, the focus is shifting from satellite companies’ orbital slots, to spot beam and frequency reuse.

Just as Panasonic is leveraging its airline relationships in the embedded IFE sector to score Ku connectivity business, Thales can be expected to do the same with its new arsenal of Ka connectivity and STCs for the LiveTV system on A320 and 737 aircraft.

It should be noted, however, that both Panasonic and Thales will be competing with ViaSat because – in addition to providing service to Thales (through relationships forged by LiveTV) – ViaSat is gunning to be prime on airline contracts as well.

For instance, ViaSat previously announced it would buy KA-SAT capacity from Eutelsat to support a new connectivity program with Israeli carrier El Al, and seek STC for the 737 itself. 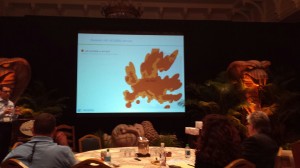 ViaSat and Eutelsat have both gone on record in the past saying they’d be open to partnering with Inmarsat Global Xpress to augment Ka coverage and cover global gaps.

“Why not?” said Risse. Imagine a single solution that uses both GX and regional Ka and can switch between the two with the same terminal so you’d have “high frequency [Ka] satellite when you are covering Europe or North America or such hot spot regions” and GX elsewhere. Antenna hardware, he said, is a challenge, “but I think this is a great challenge to have”.

Asked by RGN if there would be concern about switching between GX satellites and regional Ka in terms of passenger experience, LiveTV vice president of sales and marketing Mike Moeller said, “That’s a great question. In many cases the level of service is being confined by the economics, not the technology. So in this situation, we’d try to keep the level of service constant and blend together the different rates, so we see it as very important to have low-cost regions to help support high-cost regions, so usage would be similar to cost point.”

Asked by RGN if Inmarsat would be amenable to such an arrangement, Moeller cautioned, “What we’re doing and what we do often at this conference is we try to predict the future; see where it’s heading and what makes sense for a service. He added, “I think the people are looking on [into the future], and what we have to do because these things take many years to develop. So no I don’t think they’re in full agreement with anything we said.”

Now that Thales has completed its acquisition of LiveTV, the arrangement might bring ViaSat closer to agreeing to augment with GX, which, as Inmarsat senior VP for external affairs Chris McLaughlin noted, will be “linefit option for the A380 and on the Dreamliner” in addition to the A350 XWB. It’s unclear if Inmarsat would even consider such an arrangement.

What is clear is that Thales is providing GX service on the A350, and is a value added reseller of the service, so the aerospace manufacturer is now fully embedded in both regional and global Ka-band connectivity, and will face off against Panasonic in the connectivity space as it has done in IFE.

Note: Please click on the images for a somewhat clearer view of the slides presented above.