It will never carry an airline passenger high above the clouds, and yet the Stingray concept seat, a short-haul economy class prototype developed five years ago by Recaro, continues to be a “carrier” of technology for the manufacturer to this day.

“It was presented in 2009 at Aircraft Interiors Expo in Hamburg,” Mark Hiller, CEO at Recaro Aircraft Seating tells Runway Girl Network. “At just 5.4 kilograms per passenger it was the lightest in the market and therefore really created a lot of interest in the industry due to its low weight in combination with its comfort.”

At the time that the Stingray (named for the project manager whose surname “Stachel” translates to “sting” in English) was unveiled, the lightest fully-certified economy-class seat on the market was in the 9-10 kilograms per passenger range. Naturally, the product represented a quantum leap in terms of weight reduction. Though certification tests had been proven only via simulation, and it was never actually meant to fly, the Stingray concept still turned many a head (see it pictured above).

“We didn’t care about the cost of the product,” Hiller recalled. “So one target was to totally eliminate steel … consequently the steel was replaced with different materials. For example, we used titanium for the fittings, high strength aluminum alloy in the basic and secondary structure and we used carbon fibre for structural parts like seat spreaders.” 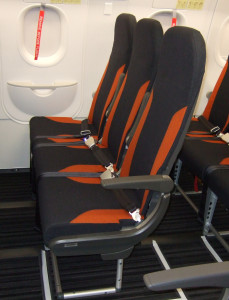 The Stingray project resulted in Recaro being granted six new patents. During the development process the firm introduced completely new alloys and unique bonding methods, while working out a number of other ways to oust unwanted kilos. “Lightweight is about more than just materials, it is also about integrating and even reducing parts. For example, we came up with the concept of a pre-defined recline where the backrest of the seat is already a little reclined. That gave us the opportunity to remove the recline mechanism,” Hiller said.

The pre-recline concept was a solid one and Recaro immediately “carried” the idea over into its SL3510 economy class product, reducing the weight of the seat to about 9.3 kilograms. The seat was subsequently awarded the 2009 Crystal Cabin Award in the category of Industrial Design/Interior Concept.

Air France became the first SL3510 customer in 2010 and more recently budget carrier easyJet selected the seat for all its new A320 aircraft. Recaro claims that with the SL3510, the airline has achieved a weight reduction of approximately 600kg per aircraft, when compared the previous seating.

Last year Recaro launched the CL3710 slimline seat for long-range economy; again looking to its lightweight prototype for solutions. “For this seat we have taken over the concept of titanium fittings,” Hiller explained. “For sure they look different, but the concept, the ideas and the processes for these fittings come from the Stingray.”

Other aspects of the Stingray have been (or are being) modified and integrated into a multitude of projects at Recaro. Even all these years after the prototype was first revealed, the little black seat still has much to offer future generations of aircraft seating.

Asked whether we can expect to see a Stingray sequel any time soon, Hiller replied: “We cannot talk about that in detail… but it is what we will do, because it works extremely well.”