We’ve done it on trains. We’ve even done it on planes (years ago on Southwest Airlines). Sit across from each other, that is.

But now a major seat manufacturer, Zodiac Aerospace, has tabled a concept – and applied for the patent – which would see us sit forwards-backwards-forwards.

“It’s a different way of traveling, with people facing each other,” Zodiac Aerospace executive VP, communication & investor relations Pierre-Antony Vastra said at the Aircraft Interiors Expo in 2014, when the company exclusively unveiled its new concept to Runway Girl Network. He says an airline could accommodate 250 passengers, seated at 31in pitch with this new design.

You’ll note that, similar to movie theatre seats, the seat pan on Zodiac’s concept swivels up once a passenger stands up. This is essential to ensure ingress and egress, and most especially the latter in the event of an emergency. 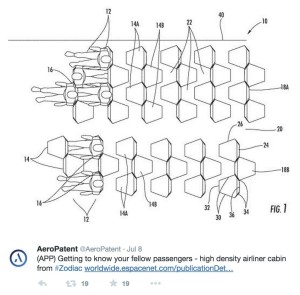 Some industry wonks and travelers are concerned about moveable seat pans. During a robust conversation on FaceBook about Thompson Aero Seat’s ‘Cozy’ staggered seat – which also features a swivel seat bottom – frequent flyers Stefan Paetow and Leighton Matthews’ first reactions to seeing Cozy were to question whether evacuation could be a problem. Travel analyst Henry Hartevelt suggested that egress concerns may have been among the reasons why Delta Air Lines ultimately opted not to install the Thompson staggered seat (the airline was announced as launch customer for the design in 2008). Routehappy airline research manager Jason Rabinowitz added, “Seat parts fail all the time, but usually not in a way that impedes ingress and egress.”

In theory, however, this is “not an insurmountable problem – and obviously, one that will need to be surmounted by a certain seat maker [Zodiac] shopping an economy forwards-backwards-forwards seat configuration”, noted Routehappy director of data John Walton, in reference to the video below, which I showed him in Hamburg. “The question is whether it sufficiently impedes egress to present certification issues. Thinking about it, I can see an argument that slowing down middle and window passengers slightly could actually speed up egress — fewer people clustering at choke points.”

Beyond ingress and egress, we must also question whether or not passengers would enjoy facing each other. Would this sort of configuration foster a more communal atmosphere, and perhaps even pull us away from our personal electronic devices to – gasp – engage in robust three-way conversation with our seat-mates? Or would the ‘cocooners’ among us (those who like to be left alone in-flight) be uncomfortable?

To be clear, Zodiac’s concept seat is just that, a concept. The manufacturer is eliciting feedback from airlines and passengers. So feel free to let Zodiac know what you think, be it in the comments section of this post or via Twitter to @ZodiacAero.

VIDEO: Industry mixes it up at Aviation Social Mixer