I knew switching flights meant abandoning the likely upgrade I would have gotten on our original flight. I was happy to be aboard. On the last day of our business trip we were done early enough to switch flights and get home to be with our families the following morning rather than late the following night.

The flight was completely full and I was in seat 20-something B.  20-something A was seated and he was a man of some presence. Fit, not very large, but clearly above “average” in his dimensions. The aisle seat occupant (“C”) had not yet arrived. When he did, I knew I was in trouble.

He was at least as big as me. “Person of size” describes me in the same way that it describes Haloti Ngata, #92 of the Baltimore Ravens. Only, I’m missing a few inches in the legs so I’m 6’1″ (1.85m) instead of Ngata’s 6’4″ (1.93m). Most of my “height” is in my torso. But height is not entirely what led to my concern. My shoulders span over 24″ (61cm) with my arms casually at my sides (not including the slight bulge in my lower deltoid muscles, forward triceps or biceps). My rear end fits into seats without much trouble. In fact, my thighs have more trouble than my hips thanks to ridiculous amounts of lower body exercise.

I’ve been “big” my entire life and very conscious of it. An odd bias towards people like me is the assumption that we deliberately try to take space from others.  Maybe some do, but that’s never been me. In situations like these I’ve tended to attempt to compress myself as much as one can by folding my shoulders forward, laying my arms across my chest and grabbing my elbows with the opposite hands. Both A and C immediately took advantage of that and annexed the arm rests.  I guess that’s where the stereotype comes from.

After reaching 10,000 feet A and C let their seats back. While not the best way to spend a coast-to-coast red-eye, I left my seat in it’s forward, upright and locked position since being forward of the other two actually gave me a modicum of shoulder space.

About five hours later I met my travel companion in the gate area and we both headed straight to the rest rooms. Boy, was this going to be a relief. “That’s odd,” I thought, “I really feel the need to go, but nothing’s happening.”

Taking personal inventory of my systems I could sense my insides were unsettled, and chalked up the experience in the men’s room to screwy meal cycles, lack of sleep, or just being on the go for nearly 24 hours straight. I knew the middle seat, no sleep red eye didn’t help.

The following night my wife and I attended a friend’s birthday party. Something was clearly wrong. Food wasn’t helping. In fact I had no appetite. A pressure was building at the top of my belly and there was some discomfort when I pressed there.

I had scarcely relieved myself since landing the day before and there was absolutely nothing coming out the other end despite having every sensation that something clearly needed to be vacated.

WTF? It started to feel like my appendix. Or could it be my gall bladder? What the heck did I eat? 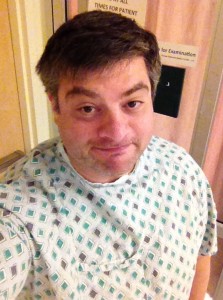 The next morning I called my doctor, explained the symptoms and how long they’d been going on and he suggested a trip to the ER.

At the ER they ran tests, including a sonogram, but my organs all looked fine. Instead of keeping me they suggested I go home and if I felt any acute pain to come back.  i.e., “if it gets worse, then we’ll open you up.” Meanwhile, I think they diagnosed me as “severe gas”, despite not having actually passed any in 48 hours.

By the end of the day things were moving again, albeit slightly, but I was beginning to feel better. I still lacked any appetite but that would return to full force in a day or so as well. I remember looking back and realizing that throughout the flight I could feel my insides getting out of whack.  I’d been “holding it in” for the entire flight.  And by “it” I mean *everything*.  The body wasn’t meant to work that way.

Contorting myself for over five hours and not allowing my body to function properly, quite literally put me in the ER. I fly a lot and that was the first time that had ever happened.

About the author, Hillel Glazer

Hillel, pictured in the ER, has been a bonafide AvGeek since a very young age. Having taken his first trans-continental flight when he was just over a year old he’d accumulate over 100,000 air miles before he was 18.  His passion for aviation carried him through a degree in aerospace engineering and he now applies his accumulated 25+ years of engineering, technology and management experience leading his Baltimore-based world-traveling management consultant firm.  Sadly, he didn’t get smart about concentrating his miles until rather recently and has held Gold or higher status in the Star Alliance network since 2010. Despite his travels, he spends much of his scant spare time piloting small aircraft where the #PaxEx is terrible and the best IFE is the window and ATC comms.

Allegiant vies for more bucks as it complies with pilot rest