Regardless of the aircraft component a manufacturer seeks to install on an aircraft, proving compliance to the relevant regulatory requirements is required.  Because of the hazards fire poses in the cabin, flammability testing of all materials is mandatory. The tests are designed to evaluate how the material responds to flame: whether the flame self-extinguishes in time, the level of heat emissions produced by the material as it burns, and the toxicity of the smoke produced by the burning material are considered.

At times, understanding what the regulatory requirements are (and ensuring consistent compliance) may be confusing, especially to manufacturers first entering the aviation industry. The best way for a manufacturer to be confident of its compliance is for it to know the applicable regulations, and to seek the counsel of engineers who are experts in this field. Knowing who to ask and what to ask is the challenge.

At the very core of flammability compliance for aircraft interiors is regulation Section 25.853 and part 25, appendix F, part I, which details the test criteria.  Section 25.855 is also relevant to interiors manufacturers who make products specifically for the cargo compartments of the aircraft. The regulations are very specific. Appendix F, part I, provides exact methods for the preparation of test samples, the configuration of the tests by product type, and the test result tolerances by product type. The spirit of these regulations is to ensure that any materials used inside the cabin suppress the spread of fire, limit the heat emissions, and minimize the spread of noxious smoke. Appendix F, part I, provides detailed specifications for the test instruments to be used for certification, as well as details on the selection and preparation for testing of test samples. The FAA Aircraft Materials Fire Test Handbook provides essential information on the various test methods and provides the appropriate test forms to be completed for each of the types of flammability tests.

Working with the Regulatory Authorities

Beyond the FAA in the US and EASA in Europe, there are a number of local authorities for sovereign nations all of which have specific requirements for operations under their license. Manufacturers should be familiar with them. Some, like the CAA in the UK, may have their own independent approvals processes for products sold to airlines operating under their license. The IACAO (International Civil Aviation Organization) provides a comprehensive list of governing authorities by country.

There is a concerted effort by all these authorities to maintain consensus on the requirements for aircraft components. The authorities cooperate to ensure a uniform code. They update regulations in concert with each other (including the regulations which apply to Parts Manufacturing Approval-PMI). In most cases, a product which is approved by one is also acceptable to the others. Compliance to FAA regulations also ensures compliance with the global regulations, with very few exceptions.

Flammability requirements go through this same regulatory reconciliation process. The authorities meet regularly, participate in specialized workgroups, and ensure that changes made by one will be acceptable to the others.

The worldwide flammability workgroups, composed of global regulatory authorities and manufacturer member companies, have issued clarifications and standardizations of the testing requirements which make certifying a new product much more straightforward than it was in the past.

The FAA and EASA have issued an updated policy statement and memorandum which detail their updated flammability requirements. The FAA states that their 2012 policy statement “streamline[s] the flammability testing of many commonly used interior materials”. That is supported by the clarity of the reference tables provided by component and the improved illustrations of test sample assemblies, both of which are significant improvements from documentation previously available.

Scott Campbell, director of flammability engineering for Zodiac Aerospace Commercial OEM Cabin and Structures in Huntington Beach, CA, is an active participant in Flammability Workgroups, and a respected speaker on the subject. I interviewed him just after he returned from the FAA Sponsored Seventh Triennial International Fire and Cabin Safety Research Conference, which took place in Philadelphia from the second to the fifth of this month. Along with Michael Jensen of Boeing, Campbell made a presentation at this year’s conference specifically on the Flammability Testing of Interiors Materials. The full presentation will be updated to the FAA website in the coming weeks. 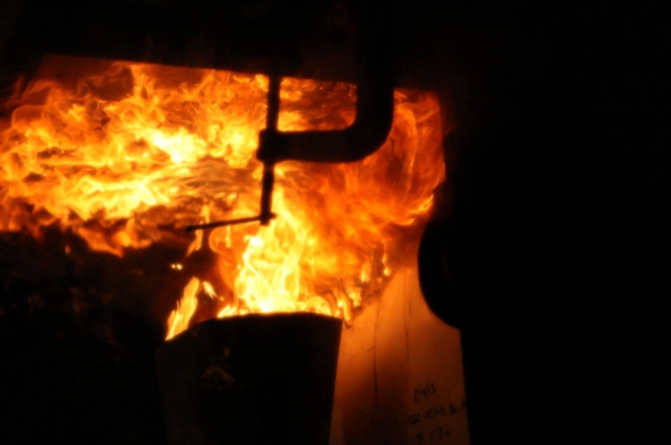 I asked Campbell to give me his impression of this year’s conference and highlights of what was accomplished. He said: “We are seeking greater safety along with innovative cost effective techniques to show regulatory compliance. Advances in fire modeling give hope to future reduced physical testing.  Lithium battery fire threats and ways to mitigate these threats were well represented. New magnesium alloys look very promising for future use in seats.  Then our work in the Flammability Standardization Task Group made possible the release of the FAA Policy Statement on the Flammability Testing of Interior Materials.  This Policy Statement, implemented in August 2012, has saved hundreds of thousands of dollars in physical testing costs.”

Campbell has participated in flammability certification of aircraft components since 1985, beginning with McDonnell Douglas/Boeing. He has been director of flammability engineering with Zodiac since 1999. I asked him what advice he would give manufacturers trying to certify new products. “All certification activities are based on released engineering,” he explained. “Late engineering brings certification to a halt…product can’t go into service until it’s certified.”

Understanding the regulations at the design phase and ensuring the proper engineering has been done for compliance before the testing phase, is essential to success. He provided me the following diagram which he uses during his presentations to illustrate the point: 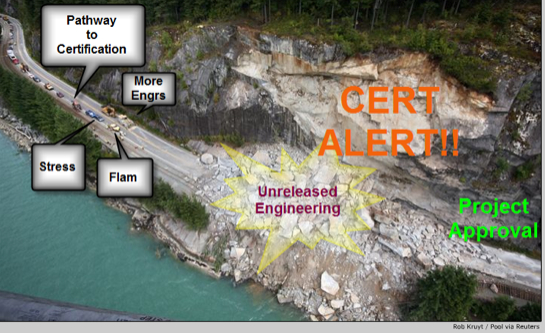 “Ensure the familiarity with all material build-ups used in the design [so] that [the materials] will meet the flammability requirements before going into final certification testing. Pre-burns are highly encouraged..don’t underestimate the synergistic effects between materials. Lastly, flammability test coupons should be made to the highest production standards–absolutely no short cuts. Sloppy fabrication results in unwanted failures preventing product from delivering on time.”

Manufacturers interested in participating in any the International Aircraft Materials Fire Testing Working Groups (IAMFTWGs) can do so without requiring a special invitation. “There are three meetings a year, usually in March, June, and around October or November. Two [take place] in North America and one in Europe,” Scott indicated.

Special meetings have also taken place in Brazil and Singapore.  Manufacturers can keep updated on scheduled meetings via the FAA website. The next scheduled meetings are for the first week of March in Savannah, Georgia, and end of June in Switzerland. “Many new tasks groups have been formed and are looking for participation,” Campbell says.

I contacted the FAA directly, and they provided me with an up-to-date Improvements to Aircraft Survivability Fact Sheet. This Fact Sheet provides a good record of the regulatory improvements the FAA has made over time to ensure passenger safety.

EASA officials also referred me to their certification memoranda page and specifically to memorandum CM-CS-004, issued in October of this year.  It lists all the relevant documents of applicable regulations both from EASA and the FAA. They indicated: “Book 2 of CS25 which contains guidance material to the applicable flammability requirements..is updated on a yearly basis.”

Working directly with an expert during the process of certification is essential, especially for new manufacturers whose engineers may not be familiar with the processes and requirements.

I contacted George J. Ringger, MAS, PE, a noted expert who provides guidance to both established and emerging manufacturers in aviation. Ringger holds a Masters of Aeronautical Science degree in Aerospace/Aviation Safety Systems, is a Board Licensed Professional Engineer in the field of mechanical engineering, and holds FAA-DER authorizations in both Aircraft Structures and Flammability. He is certified as an FAA-DARF (Manufacturing Airworthiness) and FAA-DART (Maintenance Airworthiness). He is also Adjunct Professor of Aeronautics at Embry-Riddle Aeronautical University.

Ringger provides a wide range of certification consultancy and training services to manufacturers, and is a speaker and workshop leader at a number of industry conferences such as the ACPC, ASA, MARPA, and the AVM Summits throughout the year.  He was kind enough to share a wealth of information and resources which would assist manufacturers in certifying their products and maintaining that certification.  He provided the following list of relevant documents:

Ringger explained the process of submitting approvals for assemblies as follows: “Burn-testing is accomplished as part of the original FAA approval process. This is a very controlled process with FAA oversight. A drawing or sketch of the burn samples must be generated. It is important to understand that the specimens must be an accurate representation of the actual as-installed part/assembly. For example, a bulkhead burn-test specimen must represent the entire cross-section (including adhesive and decorative materials) of the bulkhead assembly as if they were cut out of the center of the bulkhead. Next, a burn test plan must be written and approved by the FAA prior to conducting a burn test. Burn-test specimens must be fabricated. The burn-test specimens must be conformed by an FAA-DAR prior to testing, an FAA approved testing facility must be used, and an FAA-DER must witness the actual burn test. The FAA-DER must then issue and approve (or disapprove) the test results based on the outcome of the burn test.”

Designated Engineering Representatives (DERs) and Designated Airworthiness Representatives (DARs), such as Ringger are an essential partner in the certification process for manufacturers, an absolute requirement for companies who do not have engineers with those qualifications already on staff. A DER/DAR must sign off on test results and certificates of compliance for flammability. These are designated individuals, approved by the FAA and operating under FAA license, though they work independently. As Ringger explains, “the FAA reaches out into the aviation industry for subject-matter experts..[in order to] keep up with the rapid changes in technology… Designees, including DERs and DARs, must meet the qualification and training requirements described in FAA Order 8100.8. These qualifications are a combination of education, experience, and subject-matter expertise. Initial and recurrent training is taught by the FAA themselves and not third-party trainers.”

EASA explained that under Part CS21 of their regulations, “privileges like [DER and DAR] can only be delegated to approved Design Organizations (DOA)..not delegated to individuals”. EASA maintains a current list of companies who have this designated approval on their website.

Campbell indicated that their own in house lab at Zodiac is so busy with new production that they don’t outsource their services to suppliers, but there are laboratories who do.  It can be beneficial to use an outside lab, and there are many quality established flammability testing laboratories in our industry, as well as specialized DARs and DERs who can facilitate the aircraft interior component certification process. As Ringger says, “The most important thing to keep in mind is that testing must be conducted on all interiors materials in keeping with their relevant requirements and that current and certified test results are required for each item delivered throughout the life of the product.”  He recommends contracting outside services to perform these functions, adding, “Let the experts do what the experts are good at doing.”

Ringger closed with these words: “Most manufacturers do not understand the design and production approval process. The task of certifying an aircraft part can be daunting given the lengthy process and the many steps that are required. Understanding this process can greatly enhance the outcome and reduce unnecessary delays or frustrations that many manufacturers experience. I recommend manufacturers to engage someone knowledgeable in this subject who can guide them through this process or attend industry workshops. I also encourage manufacturers to look at the production approval process as a roadmap to their success.”

No let-up in laser attacks on airplanes