Porter Airlines is unveiling an exceptional new economy air travel experience that challenges what every North American airline offers. Building on its  distinct, longstanding regional service, Porter will elevate economy flying for everyone in its greatly expanding network.

Coinciding with the airline’s strategy to grow in markets throughout North America using new Embraer E195-E2 aircraft, as well as its existing De Havilland Dash 8-400 fleet, travellers will enjoy a new level of generosity and thoughtful service that is non-existent today in economy air travel.

Porter’s existing signature in-flight service, featuring complimentary beer and wine served in glassware, along with a selection of premium snacks, will continue being part of the journey. The introduction of the E195-E2 also brings all passengers free, fast WiFi, with full access to web surfing or streaming favourite entertainment platforms. On longer flights, the option of fresh meals made with real food and healthy ingredients is also available.

Porter’s current two-by-two cabin seating is also coming to longer-haul jet travel. This ensures that every passenger enjoys more personal space, thanks to being the only airline with no middle seats on every flight. 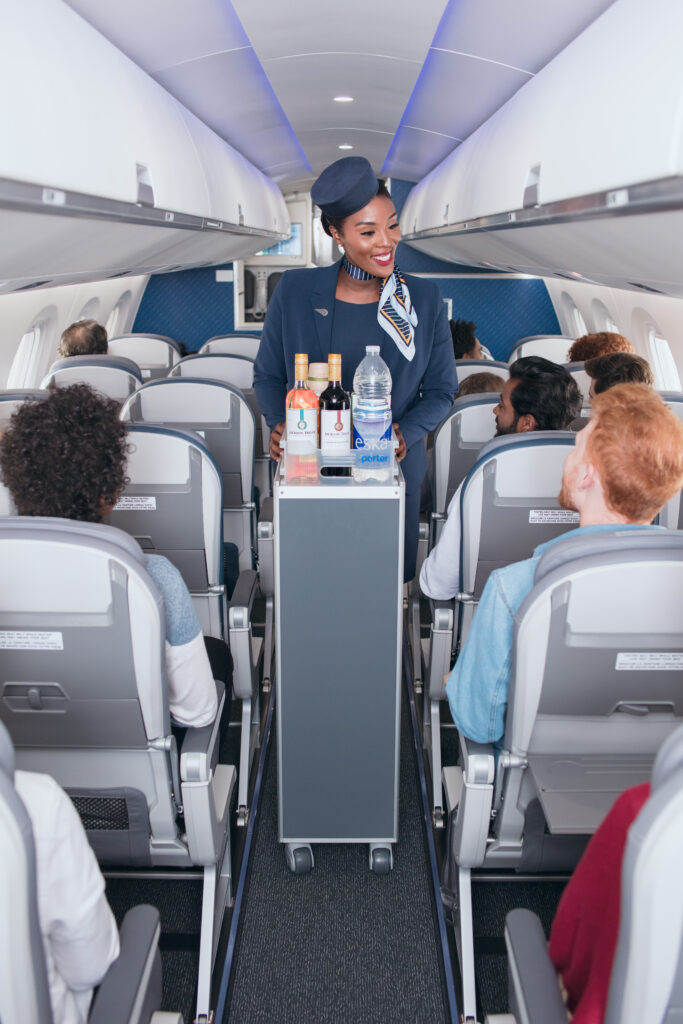 “Porter is meaningfully investing in making economy air travel enjoyable for every passenger in ways that no one else is,” said Michael Deluce, president and CEO, Porter Airlines.

“Other airlines have been focused on taking away perks and comforts for decades, but we believe that people should actually enjoy flying as economy passengers. It is possible, as we know from having already redefined regional travel over 16 years ago. Now we’re ready to do it for a broader North American market in a way that no traditional or low cost carrier is willing to. It’s an enhanced experience that builds on our reputation for providing an elevated level of service to every passenger at reasonable prices in a single class of service.”

Porter’s new E195-E2 aircraft will have a 132-seat, all-economy configuration, offering a number of legroom options. This complements its current fleet of 78-seat Dash 8-400 aircraft that will now offer passengers two legroom options.

Porter is introducing a new, all-inclusive economy experience called PorterReserve, that is unlike anything offered today in North America. When passengers purchase a PorterReserve fare, they receive all of the perks economy travellers may want for one reasonable price that is significantly lower than business class. The fare includes dedicated airport check-in, early boarding, enhanced legroom, fresh meals on longer flights, Porter’s signature beer, wine and premium snacks, cocktails, two checked bags and the ability to change flights without a fee.

Porter’s traditional economy experience is now referred to as PorterClassic. This is the classic Porter service that includes free beer and wine in glassware, and a selection of premium snacks. On flights over 2.5 hours, passengers may also purchase the same high quality individual fresh entrées and cocktails available in PorterReserve. There is also the option to select additional perks, such as extra legroom, extra baggage and travel flexibility.

The PorterReserve and PorterClassic experiences, one all-inclusive and the other à la carte, respond to what’s well known about economy travel today – that airlines make many travellers feel undervalued, disrespected and stressed about flying. Porter conducted significant market research across Canada to fully understand what economy passengers want and has created an experience for them that transforms expectations.

“Other airlines save their best service for a small number of passengers who can afford expensive premium fares or have special status, and the quality onboard is often still inferior,” said Kevin Jackson, executive vice president and chief commercial officer, Porter Airlines.

“The vast majority of people travel in economy and must tolerate an eroded experience with few, if any, amenities or services. Porter’s approach disrupts this model by showing that it is possible to respect the needs of economy travellers and make them feel valued by providing a quality, generous experience at competitive prices. We will do this unlike any other North American airline, with style, care and charm.”

Porter will soon expand its fare options to support its broader product offering. Its four existing fare options will be aligned with PorterClassic and two new fares are being introduced with the PorterReserve experience. Fares details will be available at the same time as the first E195-E2 routes are announced.

Porter is the North American launch customer for Embraer’s E195-E2, providing the ability to operate throughout North America, including to the west coast, southern U.S., Mexico and the Caribbean. The aircraft will initially be deployed from Toronto Pearson International Airport, with Halifax, Montreal and Ottawa also seeing new service with the E195-E2 over time. The first of up to 100 new aircraft are scheduled to be delivered to Porter this year and initial routes will be announced in December.

Porter’s existing Dash 8-400 regional fleet will continue operating to more than 20 destinations, with a main base at Billy Bishop Toronto City Airport.

The E195-E2 is the most environmentally-friendly single-aisle aircraft, at 65% quieter and up to 25% cleaner than previous-generation technology. It has the lowest fuel consumption per seat and per trip among 120- to 150-seat aircraft, and is the quietest single-aisle jet flying today. Combined with its existing De Havilland Dash 8-400s, Porter will have one of the most environmentally sustainable aircraft fleets in the world.

Sustainability is at the heart of the new menu design, with a priority on reducing and eventually eliminating single-use plastics onboard, providing biodegradable cups and cutlery, and eco-friendly packaging. Catering partners also feature high-quality Canadian brands that will be announced prior to the introduction of E195-E2 flights.

The complete catering menu is available on flights operating for 2.5 hours or longer. Shorter flights have a full offering of complimentary snacks and beverages. 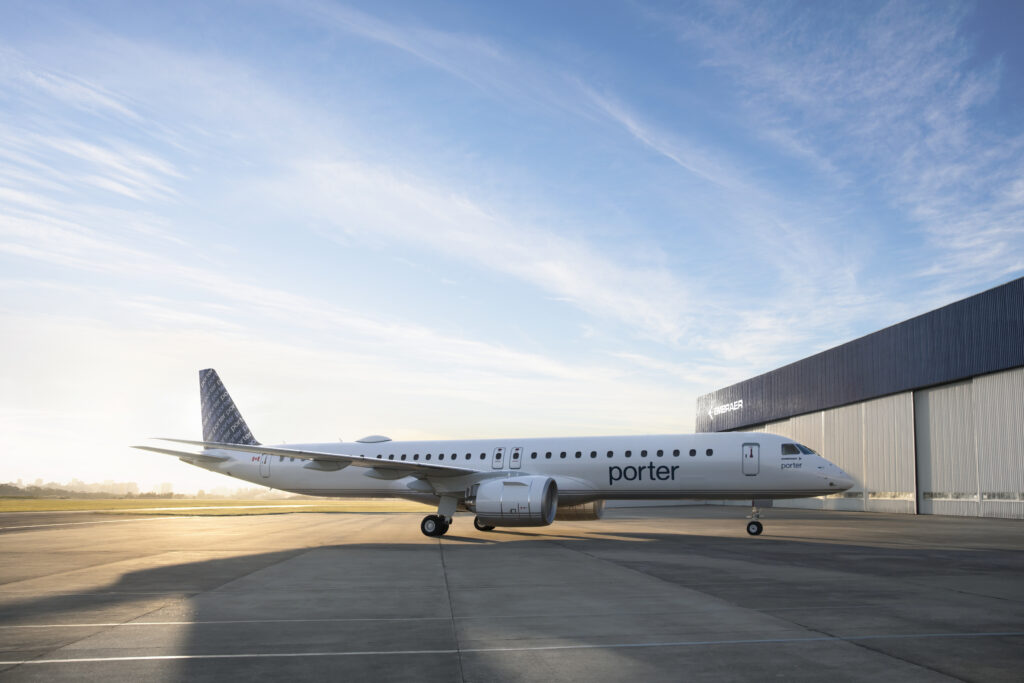 Since 2006, Porter Airlines has been elevating the experience of economy air travel for every passenger, providing genuine hospitality with style, care and charm. Porter’s fleet of Embraer E195-E2 and De Havilland Dash 8-400 aircraft serves a North American network from Eastern Canada. Headquartered in Toronto, Porter is an Official 4 Star Airline® in the World Airline Star Rating®. Visit www.flyporter.com or follow @porterairlines on Instagram, Facebook and Twitter.

All images credited to Porter Airlines

Jetstar ramps up digital PaxEx on Airbus narrowbodies with Bluebox