Whether in Sydney, Seoul, Moscow or Madrid, travelers with a hearing disability are likely to wirelessly connect their hearing aids directly to the public address (PA) system to hear announcements of gate changes, flight delays or other information critical to their travel. They do this using an assistive listening technology known technically as audio frequency induction loop systems or AFILS and to users as hearing loops.

All major airports in Australia, the UK and Scandinavia offer hearing loop technology to hard of hearing travelers. At Charles De Gaulle Airport in Paris the waiting and customer assistance areas in each terminal are equipped with hearing loops.

Hearing loops are also present in a variety of locations at the Adolfo Suárez Madrid-Barajas Airport to improve accessibility for hearing-aid users and all are identified by the international symbol of hearing-aids in position “T”. At Muscat Airport in Oman, 300 counter loops have been installed throughout the airport.

US airports have been slow to adopt this user friendly international assistive listening technology but that is changing. The Port Authority of New York and New Jersey manages all of  the major airports in the Greater New York City area and it has just recently announced a set of new accessibility requirements that mandate the installation of hearing loops at departure gates and information counters in all new or significantly improved terminals not just at airports but in those for trains, buses and ferries also.

In announcing the new requirements, the Authority stated that, “Port Authority facilities will even better serve the diverse population of people with disabilities who rely on our services.” Its decision is based on “feedback from people with disabilities in regard to issues that have not been addressed in any building code or accessibility standard used in the US.” The Port Authority’s systems will be required to meet the same international standards set forth in IEC-60118-4 guidelines for airports in other countries.

Even before the Authority’s looping mandate, the new Terminal B at New York’s LaGuardia Airport was fitted with hearing loops at all Delta Air Lines departure gates. Delta had, earlier, looped some gates at the Detroit, MI airport and installed counter loops at information kiosks at Atlanta’s Hartsfield-Jackson International Airport.

All told, there are now 18 airports in the US that offer one of more of the various applications of hearing loop technology to their hard of hearing travelers. They range from the small regional airport with two gates in Muskegon, Michigan to the multi terminal many gated hub of Sky Harbor in Phoenix. Consumer driven efforts are ongoing in Albuquerque, New Mexico; Indianapolis, Indiana; Salt Lake City, Utah and elsewhere to get the airports of those cities “in the loop”.

What are hearing loops? In their simplest form they are a copper wire that circles an assembly area and is connected to an amplifier called a “driver” in the trade. A microphone or jack from a public address (PA) system is plugged into the driver and sound from them is transmitted by the driver through the loop that emits it as a silent electromagnetic signal. Tiny receivers called telecoils or t-coils found in most hearing aids and cochlear implant processors receive that signal and the devices turn it into sound. Users activate what is called a t-switch on their hearing device to connect to the loop signal and, if they wish, they can turn off the microphones in the devices to rid themselves of most of the background noise that can impede their ability to understand spoken words.

The International Hearing Loop Manufacturers Association reports that loops can improve speech recognition by users from as little as 0% to as much as 90% of the words heard and understood.

To avoid what is called “bleed” where sound goes outside of the looped area, when they are to be installed side by side such as at departure gates, they are installed in a grid pattern that contains the signal within the confines of the grid, rather than being a wire circling the waiting area. For installation a channel is cut into the floor to contain the wire for area loops like these or a copper tape may be glued to the floor to carry the loop signal instead of a wire (see featured image above).

At ticket, information and other counters, a loop can be installed in the floor where the traveler stands, at a 45 degree angle under the counter itself, or it may be a free standing panel like the one shown here. 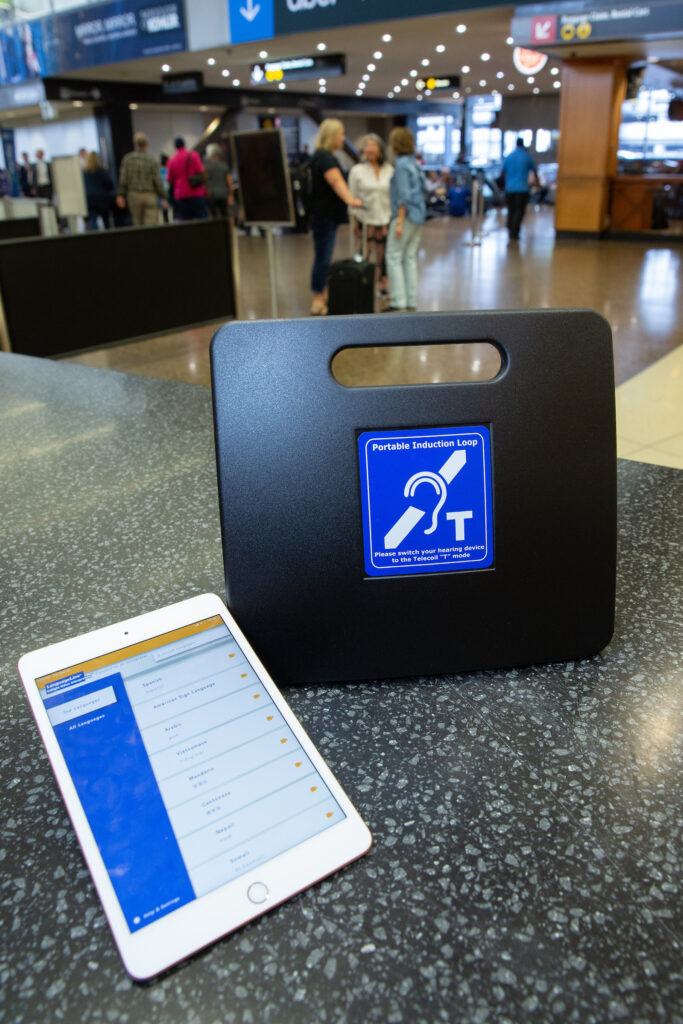 Counter loops will have a microphone connected to their driver or they may use a body mounted remote mic that transmits to the driver via a radio signal.

For travelers with a hearing disability, travel through an airport terminal is fraught with aural rather than physical obstacles. Their hearing loss, the inability of hearing aids to suppress background noise adequately and the typical cacophony of a terminal can make speech comprehension anywhere from challenging to impossible. They must often rely on note passing or the kindness of strangers to communicate with an agent at the ticket counter.

The babel in the security area is enough to blot out the words of the TSA officer. Announcements made over the PA system in the concourse are lost under the aural assault of other sound of voices, rolling luggage and other sounds that are nearly always present. Many gate agents and others making announcements are sorely lacking in proper microphone technique leaving hard of hearing listeners in the dark after a gate change, flight delay of other critical information is imparted over the PA. Consequently, a hearing impaired traveler is likely to seek out seat near the counter at a departure gate in order to ask the gate agent what he or she said over the PA system.

Missed words from the PA system can lead not just to misunderstandings but to missed flights. Hearing aids are sometimes incapable of adequately blocking the speech covering sounds of the typical airport concourse. That sound makes it difficult or impossible to identify consonants and to tell the difference between seven and eleven or between concourse B and concourse C. Frustrated and sometimes frightened by the communication problems they face, for some hearing disabled travelers fear of the terminal can be greater than any fear of flying. 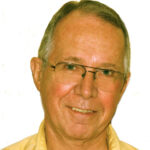 Stephen O. Frazier, a Hearing Loss Support Specialist, is a freelance writer and the Director of the award winning  Loop New Mexico initiative (www.LoopNM.com).  He was the long time HLAA chapter coordinator in New Mexico, is one of the founders of the organization’s national looping campaign and is known for his many articles in magazines such as Sound and Communications, Technology for Worship, the Hearing Review and others.