Intelsat is eyeing more software-defined satellites for its next generation network and is open to working with other satellite operators to support inflight connectivity, John Wade, the president of Intelsat’s Commercial Aviation vertical confirms.

During an interview with RGN to discuss the retirement of the Gogo Commercial Aviation name — which was “always the plan” following Intelsat’s acquisition of Gogo — Wade said the first two software-defined satellites that form the cornerstone of Intelsat’s nextgen network are on track to be delivered from Airbus in 2023.

“And longer term, we’ll be looking to introduce more satellites and capabilities as you’d expect.”

Intelsat presently operates a fleet of over 50 satellites in geosynchronous orbit. Calling the new technology “incredibly cool”, Wade boasts that the Airbus-made nextgen satellites will allow “greater versatility and flexibility than any other satellite constellation out there”, putting capacity where it’s needed and serving airlines’ hub cities “extremely efficiently”. 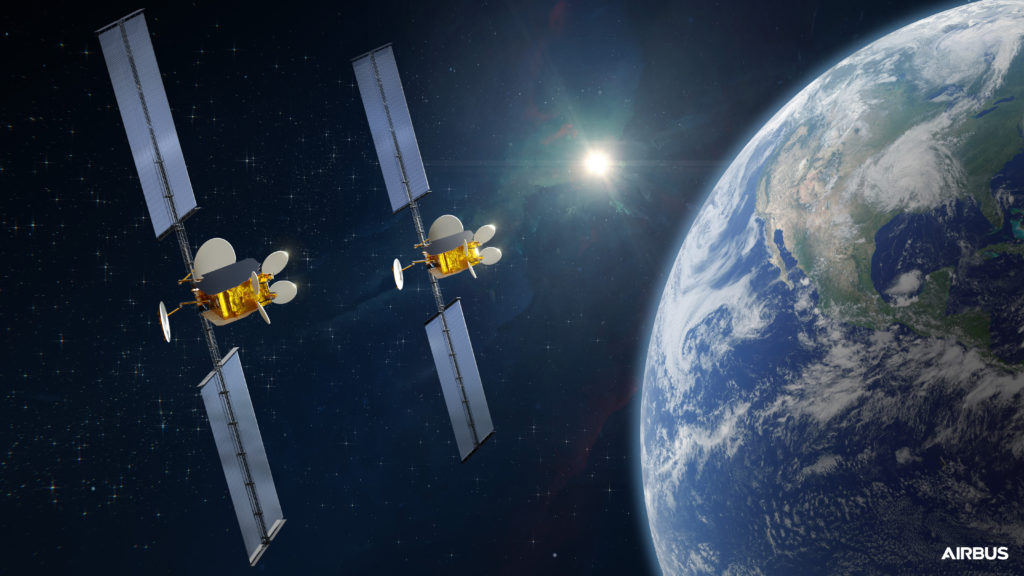 The Intelsat executive believes airlines will be happy with both the “experience and the price point” delivered by the new satellites.

“[W]e’re very fortunate in CA to be part of Intelsat now. We have access to an understanding of satellite technology and economics that we just didn’t have as part of Gogo and it’s allowing us to shape and define the nextgen network in a way that will be really compelling,” he says.

Intelsat made headlines in 2018 when it announced it would work with Ku-band LEO satellite operator OneWeb on a hybrid LEO/GEO network.

The Intelsat 2Ku antenna (formerly Gogo 2Ku) has long been positioned as capable of roaming via hybrid networks such as LEO/GEO or MEO/GEO. Indeed, the entity then known as Gogo touted that the ThinKom-manufactured 2Ku antenna would be largely interoperable in a shared OneWeb/Intelsat LEO/GEO network. In 2016, Gogo forged a partnership with Intelsat with the intent of leveraging such a network for inflight connectivity.

Intelsat’s Wade would not talk specifically about OneWeb, which last year restructured its operations in the US under the Chapter 11 bankruptcy process (Intelsat appears to be in the home stretch of its own bankruptcy exit plan).

We’re the GEO operator today, but not exclusively providing GEO services on our own network, so we have a more open ecosystem approach. Others have a more closed approach if you will. In the GEO space, we’re open to using other providers…

So we’re extending that view to not only non-GEO but to GEO, so I would say across the board we’re open to partnering with any satellite operator that sees our experience and capabilities in aviation as a differentiator.

Asked by Runway Girl Network if Intelsat is eyeing hybrid air-to-ground/Ku-band IFC solutions, Wade responded that the firm is “not going to get ahead of ourselves in terms of revealing our roadmap” but added that Intelsat believes it is well positioned for an array of products that would allow airlines to optimize IFC for specific routes. (Years ago Gogo designed a hybrid ATG/Ku Ground-to-Orbit solution.)

2Ku is linefit offerable on the A320 family

Meanwhile, Intelsat ‘s2Ku system has just been installed by Airbus at its factory in Hamburg on an A321neo destined for Cathay Pacific, representing the first fully linefit 2Ku install.

“We have been working with Airbus to deliver linefit aircraft, and are pleased to now make that a reality,” said Dave Bijur, senior vice president, commercial for Intelsat’s Commercial Aviation business division.