Both known for world-class engineering, performance, and design, Embraer and Porsche will produce just ten pairs of business jets and sports cars, providing a truly seamless experience from road to sky, for the first time in history.

“Duet is an exclusive package developed in a unique design collaboration with Porsche. This rare, refined combination will only be available through this one-time-only pairing,” said Michael Amalfitano, President & CEO, Embraer Executive Jets.

“In the spirit of delivering the ultimate customer experience, we are fusing two of the most notable brands in the aerospace and automotive industries, bringing together the pinnacle in production sports cars with the market benchmark in light jets, once again proving that we don’t simply follow trends—we create them.”

Duet brings the Phenom 300E and the 911 Turbo S into perfect harmony. As the world’s fastest and longest-ranged single-pilot business jet, the Phenom 300 series transformed the light jet category.

From its revolutionary, award-winning interior design, with an abundance of cabin and baggage space to its highly intuitive avionics, this well-rounded machine delivers unmatched performance, exceptional comfort, and class-leading technology, at enviably low operating costs, with features previously available only on much larger jets. The 911 is the heart of the Porsche product portfolio and has one of the longest and most celebrated traditions in the automotive industry. The 911 Turbo S is the peak of the 911 models and stands for both performance and usability.

“Porsche and Embraer share a host of common values,” said Alexander Fabig, Vice President Individualization and Classic at Porsche AG. “As part of our cooperation, we used the know-how of both brands to work jointly on a unique pair of vehicles that are equally attractive for the customer group of jet and sports car owners.”

Designed in tandem, Duet fuses speed and style, luxury and power—signatures of both the Phenom 300E and Porsche 911TurboS. The most successful business jet of the decade (2010-2019) meets the gold standard in production sports cars, resulting in a uniquely designed jet and car, both featuring a customized interior and paint scheme inspired by one another.

“This is the perfect marriage of car and jet, as personified by the exclusive collaboration logo. The logo brings together the aeronautical requirement of lift —depicted by the Phenom 300E winglet —with the automotive requirement of downforce —depicted by the rear wing of the flagship 911. To further solidify this symbiotic partnership, the aircraft registration number appears on both the car’s rear wing and the sides of its key,” said Jay Beever, Vice President of Embraer Design Operations. 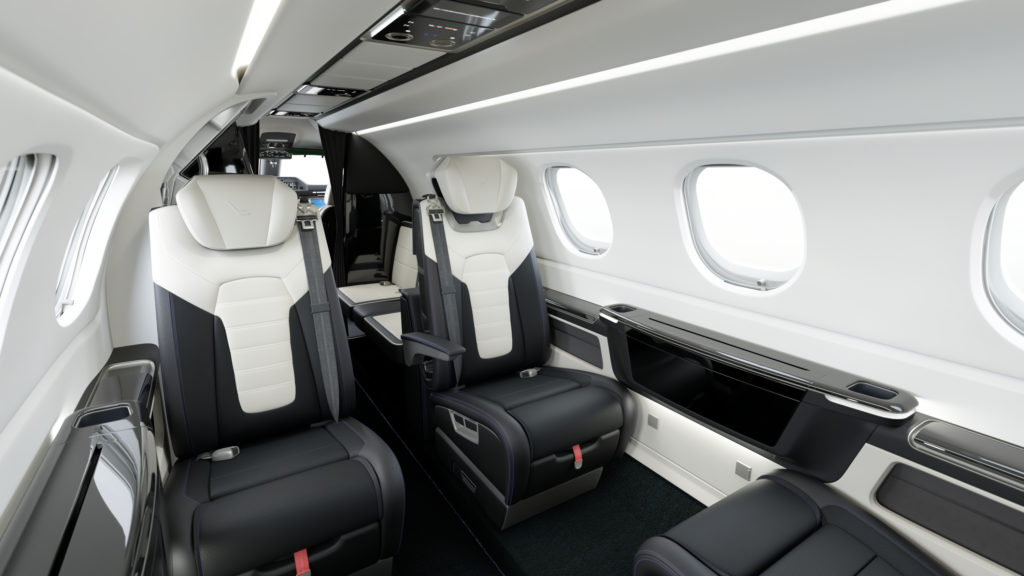 The exclusive collaboration logo is embossed on the seat headrests of the aircraft (lift) and debossed on the seat headrests of the car (downforce), as well as featured on the aircraft side ledge, speaker grills, and mounted near the main door. Each pairing also features a special badge, representing one of only ten delivered. The customer will have the option to select the location of a blue chip, reflective of their position among the ten units, according to their preference. 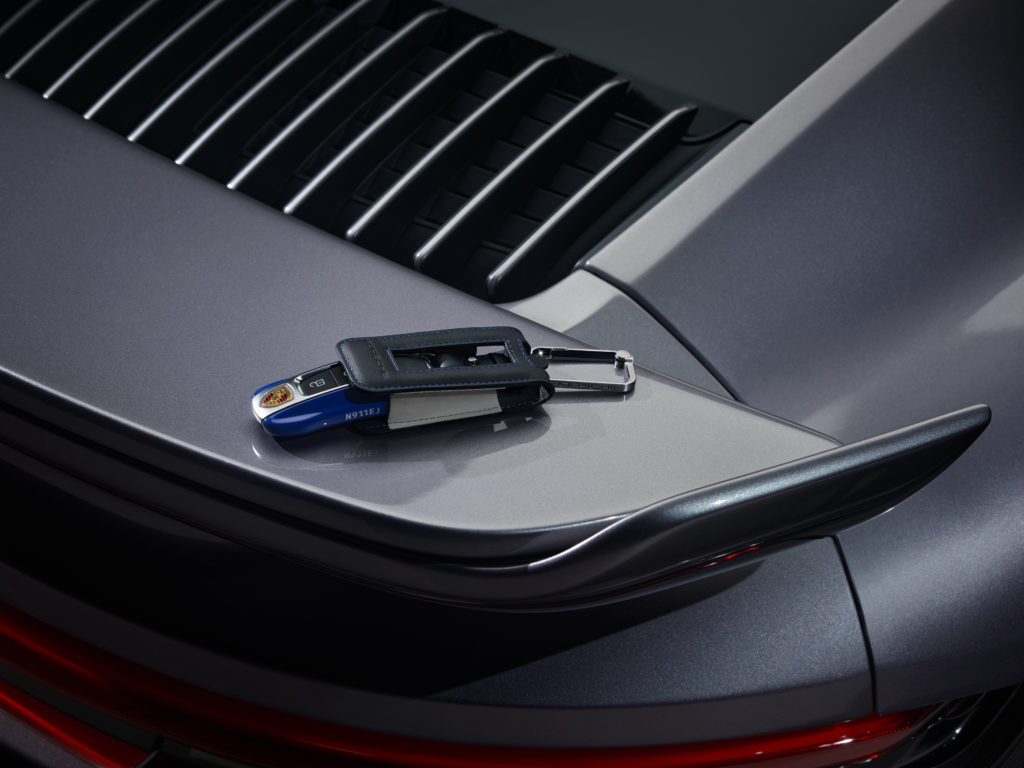 To create a seamless transition from aircraft to car for this exclusive set of customers, design inspiration for the aircraft mirrors that of the car, and vice versa. Starting with seats, the sew style on the Phenom 300E seat was patterned after that of the 911 Turbo S. The seats in both vehicles featured pull straps, a Speed Blue accent stitch,and carbon fiber shrouds to create a shared connection.

The cockpit seats of the Phenom 300E were redesigned to match the car. In the 911 Turbo S, Porsche introduced a unique color combination for the steering wheel to match the aircraft’s yoke, with a Speed Blue accent at 12o’clock, as well as the first Chalk Alcantara trim roof lining—an homage to the aircraft. To round out the interior, the stop watch of the Sport Chrono package features an artificial horizon inspired by instrumentation in the aircraft cockpit. 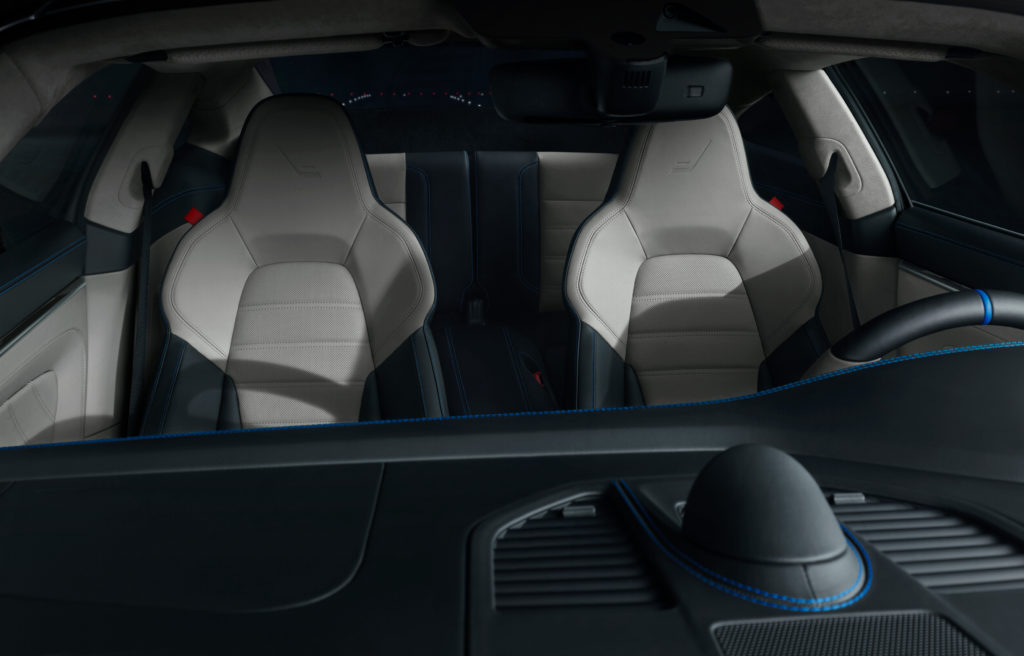 The aircraft and car share the same exterior paint pallet and general scheme. For the first time, Porsche has combined gloss and satin-gloss paintwork. The upper part of the car is finished with Platinum Silver Metallic, transitioning to Jet Grey Metallic at the bottom. Dividing the two paint colors is a trim strip with lines in Brilliant Chrome and Speed Blue.

The car is entirely hand-painted, which is unique to this project and reflective of the Phenom 300E paint process. The alloy wheels of the 911 Turbo S are painted in Platinum Silver Metallic, using a revolutionary laser process to expose a Speed Blue underlay on the rim flange.

The air intakes of the 911 Turbo S are painted in Brilliant Chrome to match the leading edge nacelles of the aircraft. The LED door projectors cast the Duet collaboration logo on the ground, and the door sill trims feature “No Step” lettering, like the messaging on an aircraft wing. 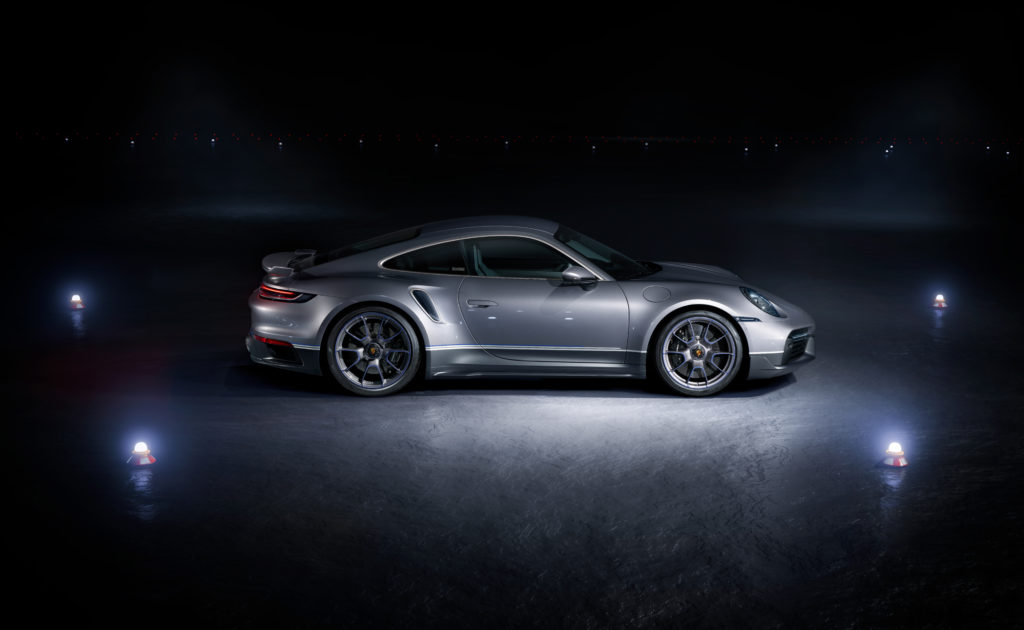 The exclusive Duet Porsche 911 Turbo S can only be purchased in tandem with its sibling Phenom 300E. To mark this first ever collaboration between Embraer, Porsche AG, and Porsche Design, Duet customers will also receive a custom Duet logo luggage set with a pilot’s bag and two weekenders, as well as a special edition Porsche Design 1919 Globe timer UTC titanium-case watch inspired by the aircraft’s cockpit. 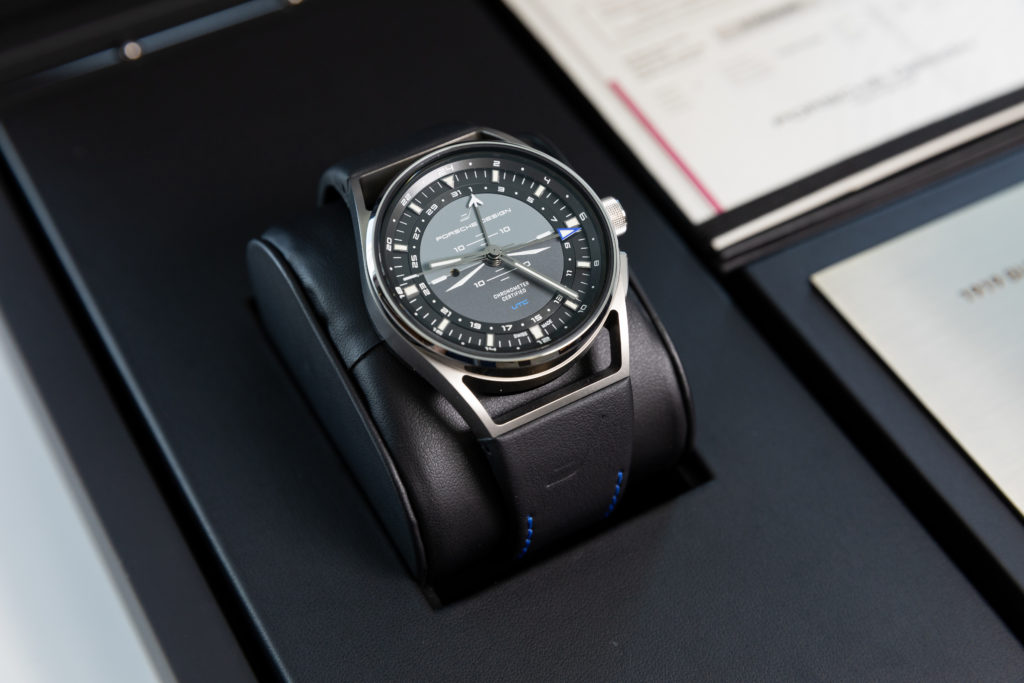 Ten limited-edition pairs of the Duet are now available for order. Deliveries will begin in 2021.

Embraer is creating tomorrow’s world of bespoke private air travel today, utilizing industry-leading innovation, design, and technology —all the while incorporating sustainable practices for the benefit of our exclusive customers. As a global company with more than 50 years in aerospace, Embraer delivers the ultimate experience in business aviation through aircraft that feature disruptive performance, comfort,and technology. Its portfolio consists of the Phenom 100EV, which offers the business aviation experience in its purest form; the Phenom 300E, which is the best-selling light jet for the past eight years straight; and the Praetor 500 and the Praetor 600, which with best-in-class flight range, are the most disruptive and technologically advanced midsize and super-midsize business jets, capable of continent-crossing and ocean-spanning missions, respectively. Every day, Embraer business aircraft operate around the globe, supported by a strong, responsive customer support network that’s top-ranked in service across the industry.

Dr. Ing. h.c. F. Porsche AG, with headquarters in Stuttgart-Zuffenhausen, is one of the most profitable car makers in the world. In 2019, Porsche delivered a total of 280,800 vehicles of the models 911, 718 Boxster, 718 Cayman, Cayenne, Macan, Panamera and Taycan to its customers worldwide –a year-on-year increase of ten percent. In this year, the sports car manufacturer achieved an operating result before special items of 4.4 billion euros, an increase of three percent. Porsche has factories in Stuttgart and Leipzig and operates a Development Centre in Weissach. The company has 35,429 employees. Porsche stands for innovation, whereby many technologies have their origins in motorsport. Porsche takes a holistic approach to its entrepreneurial responsibility, and therefore takes into account economic, ecological and social aspects.The Porsche Exclusive Manufaktur in Zuffenhausen creates very personal customer vehicles through a combination of perfect craftsmanship and high-tech. Highly qualified employees with decades of know-how devote their full attention to every detail and enhance it through hand craftsmanship. The experts call on an extremely wide range of visual and technical customisation options for the exterior and interior. The highest standards with respect to material and finishing are met. Alongside the individual customer vehicles, the Porsche Exclusive Manufaktur also produces limited small series and editions. Here, high-quality materials are combined with modern production technologies to create a harmonious overall concept