Italian cabin branding specialist ABC International is known in the aviation industry for developing and installing three-dimensional crests, logos and logotypes on aircraft cabin monuments for its airline partners. But the company, which boasts Air Canada, Etihad Airways, Ethiopian Airlines and other carriers as customers, is now dedicating more energy and resources to designing a wider range of customized interiors to improve the passenger experience. That’s among the reasons why it has partnered with 24-year industry veteran Aysegul Durak to bring to market the Boom Headrest, which aims to eliminate the need for passengers to carry portable travel pillows on board.

Durak, a former cabin interior Chief Engineer at Turkish Airlines, says she designed the Boom Headrest with passenger comfort and support in mind. “According to our studies, for the best headrest comfort the nape, the neck and the head must be fixed by tightly embracing thereof so that the headrest can carry the weight of the head,” Durak tells Runway Girl Network.

“To create said comfort, the first condition is to embrace the nape tightly; the second condition is to wrap the head and/or neck tightly while still embracing the nape. In addition to the first two conditions, the third and the much functional condition is to provide passengers with various neck and head support position selections during the journey. Boom Headrest is the only headrest that is designed to meet all these conditions that provide headrest customization.”

The Boom Headrest has been designed to interface with the most common seat types for retrofit or linefit projects. Its main structure is manufactured in aluminum alloy with steel and polyamide inserts. A vertical slide mechanism allows passengers to adjust the headrest’s height, according to their neck position.

“The multifunctional bending mechanism inside the circular structure of Boom Headrest can be folded in a 3-dimensioned manner with any angle from any point throughout the free length, [and] can embrace the neck and/or head of the passenger in a tight manner without having corners leaving any gaps. By means of this tight embracing, Boom Headrest can carry the weight of the head and neck that makes it go far beyond today’s headrests in the transportation industry,” suggests Durak. 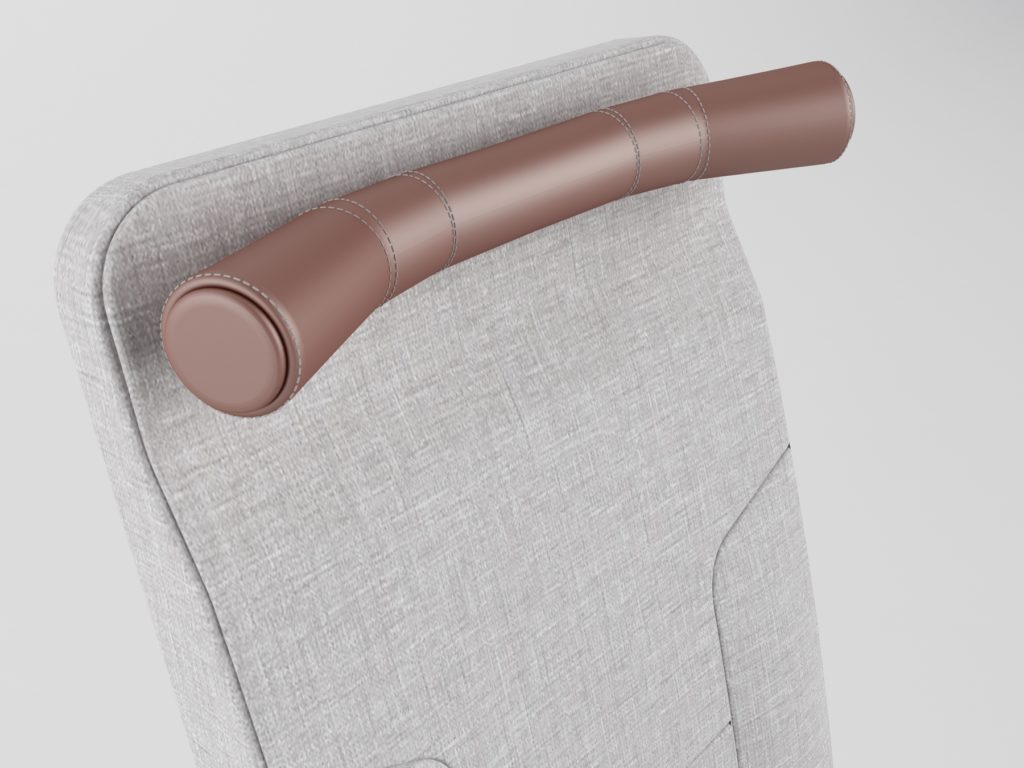 She notes that ABC can change the dimensions, foam stiffness, and the fabric according to demand. “We can adjust those according to the seat dimensions and model.”

Asked whether a seat would need to be re-certified if the Boom Headrest is installed, Durak says: “We do not expect that any recertification will be necessary because Boom headrest is lighter than any other headrest in the market. Even the current seats without headrests might still be within the weight limits to install Boom Headrest.”

ABC was scheduled to officially launch the Boom Headrest in April at the Aircraft Interiors Expo in Hamburg. The Naples-based firm created a full prototype, integrated into an economy class seat, to enable airline executives to test the headrest at the show. But the Expo was cancelled due to the COVID-19 crisis.

“Now we are targeting a new show/exhibition where to present the ‘real product’ but in meantime we decided to perform the media launch right now in June 2020 not to lose too much time,” ABC CEO Alberto D’Ambrosio tells RGN. “Based on this and considering that we have already performed the PDR [preliminary design review] of the project, we target to be able to deliver the first full integrated Boom Headrest ship-set in no more than six to eight months from the first order received.”

Over the last 18 months, Recaro and Safran Seats have introduced headrest designs that seem to bear some similarities insofar as the passenger neck sees greater support. Asked what differentiates the Boom Headrest from other designs, Durak says: “The other headrests including the two you have mentioned have standard inner width, not customizable to passenger’s neck size, so they cannot embrace the neck and so cannot properly provide nape or neck support, they can only allow the head to lean on the back or side supports. Boom Headrest promises much more than leaning the head.”

ABC’s decision to offer the Boom Headrest is consistent with the company’s heritage, says D’Ambrosio. But this does not mean that the firm plans to enter the aircraft seating market. “There are already too many…,” he says with a smile.

“In the end we target ABC to be seen and perceived as a partner company to airlines and seat/cabin and monuments vendors, helping them to boost a positive passenger flight experience with innovative but specific/niche products. With regard to Boom Headrest we firmly believe in this product and even more in its creator, Ms. Ayşegül Durak. Ayşegül’s idea is simply brilliant and looks directly to the core of any passenger need: seating more comfortably and ergonomically healthy while flying,” he says.

Despite the deep impact of COVID-19 on the aviation industry, ABC intends to add EASA Production Organisation Approval (POA)/Part 21 Subpart G capability by the end of this year, which would certify it to manufacture aircraft parts and appliances in conformity with approved data.