ANA would have considered how many passengers from each flight typically connect, but there is a blue-chip feeling to the flights ANA selected for Terminal 2, which will be ANA’s flagship at Haneda. Flights from there include New York, London, Frankfurt, Singapore and Sydney while the international terminal (to be re-named Terminal 3) will handle flights including San Jose, Milan and Kuala Lumpur.

The Suite Lounge is the more premium of the two lounges, and better showcases the work of Kengo Kuma, the architect who designed ANA’s new business class product and lounges at other airports, including Tokyo Narita. Japanese aesthetics are more prominent in certain areas of the Suite Lounge, like the entrance’s floor-to-ceiling bamboo poles in a rock garden.

Bamboo poles in a rock garden at the entrance of the Suite Lounge. Image: ANA

Similar to Kuma’s onboard product, the Suite Lounge’s napping area is heavy on wood and gray. There are six discreet, but not totally closed off beds and five reclining chairs. 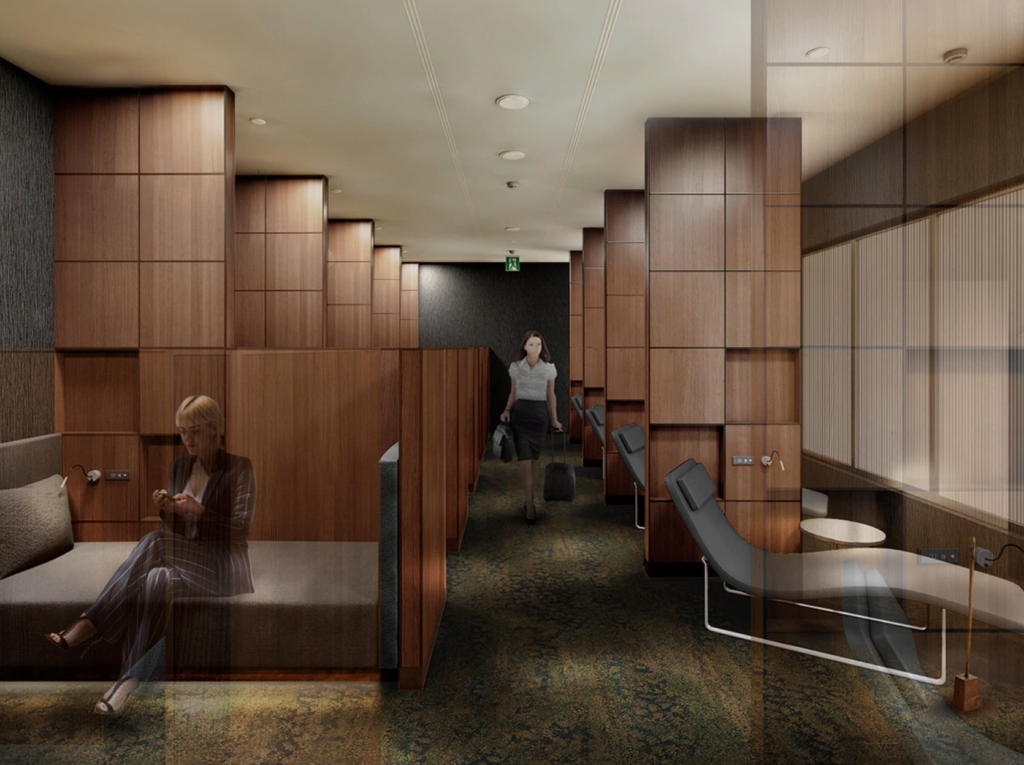 The bar area (doubling as a café in morning hours with barista services) and pods for reading or watching TV have different but complementary Japanese design. 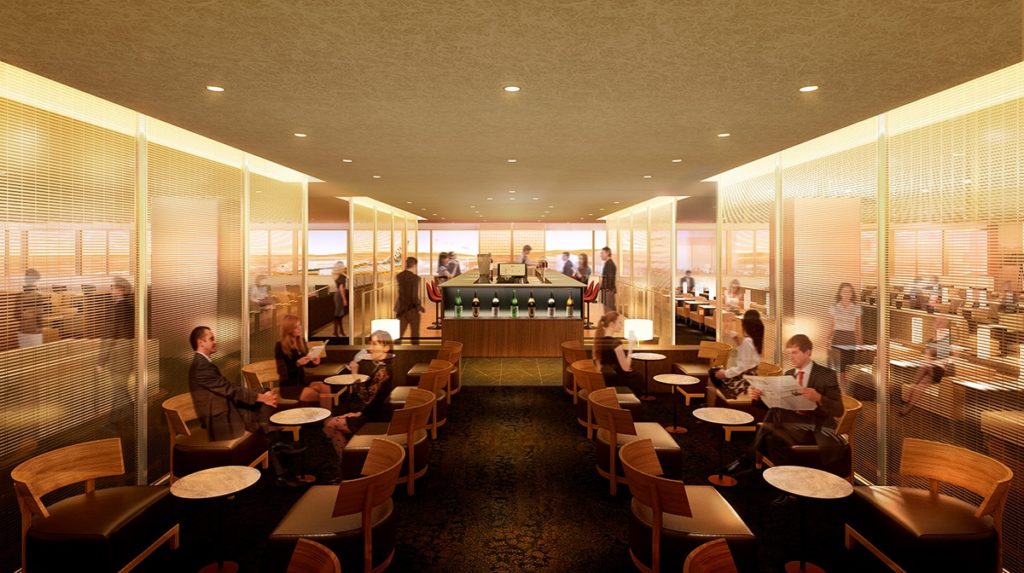 The bar, doubling as a café in the morning, has wide wooden chairs. Image: ANA

The dining area, with made-to-order meals, including sushi, is more of a contemporary design with Japanese elements. These sections of aesthetically-pleasing cosiness are a contrast to the general area, which features rows of seats facing each other with no privacy. Such old school designs typically have low tables that are difficult to work from, but ANA at least has modernized with built-in side tables providing elevated work surfaces.

Interestingly, this general seating area is replicated in the separate ANA Lounge, which also has one- or two-person booths, similar to the pods in the Suite Lounge. The ANA Lounge has smaller menu ordering, plus ANA’s standard buffet and noodle bar. Seating for dining is at large shared tables. 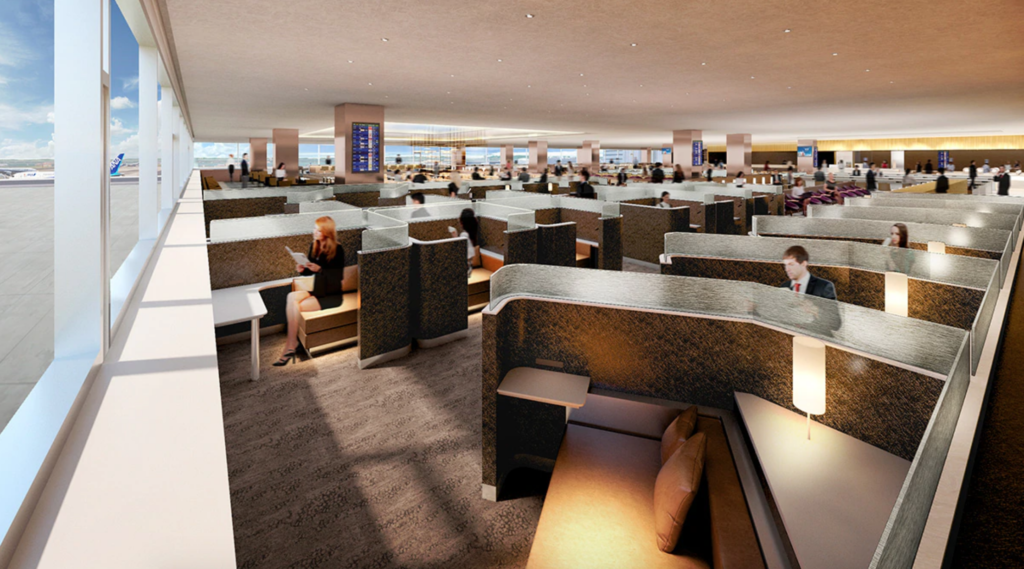 The bar area overlooks panoramic windows showing the airport apron, but, like the rest of the ANA Lounge’s features, it is not as sophisticated as in the Suite Lounge. Nor are Kuma’s design elements so prominent. 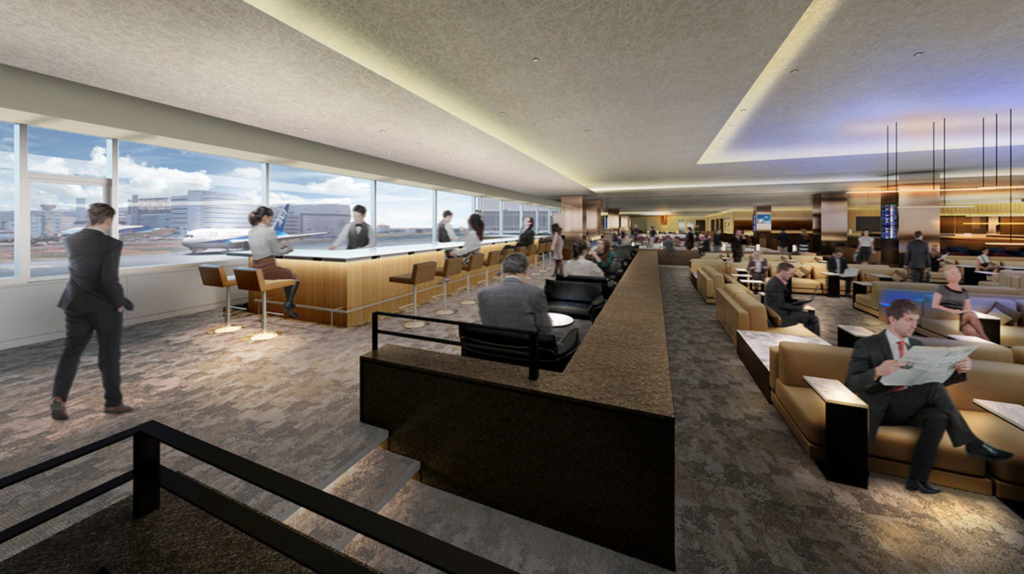 In addition to launching its two new departure lounges, ANA’s thusly-named Arrival Lounge at Terminal 2 receives a feature that will receive attention: a foot spa.

Passengers can plunge their lower legs into the foot spa overlooking the runway and Tokyo Bay. The spa has two booths, each seating two people. As it is a co-gender foot spa and not an onsen, passengers should keep their clothes on.

There is, however, a full aviation onsen experience at Nagoya’s Chubu Centrair airport, which has gender segregated and nude bathing discreetly tucked away in the terminal. (Nearby is a museum with ZA001, the first Boeing 787.)

The Arrival Lounge, open from 4:30am-12:30pm, also has 16 shower rooms. The Japanese are known for being accessibility-minded. ANA notes two of the shower rooms can be used by wheelchair passengers.

All images credited to All Nippon Airways

Four core design principles learned during 16 years in the cabin