United Airlines’ Boeing 787-8 and some 787-9s were delivered with the carrier’s old business class seats whereas the 787-10 and newer -9s arrived with the new Polaris product linefit at the factory. A decision by United to retrofit Polaris to the original -8s and -9s gives the carrier the opportunity to re-think how it segments its variants, including densifying the -8s.

While United decided to retain the 787-9’s original 48 business seat count post-retrofit, the 787-8s will see a decrease from the original 36 business seats (Collins Aerospace Diamond) to a retrofitted 28 with Polaris (based on Safran Seats’ Optima), representing United’s smallest widebody Polaris cabin – even smaller than its Boeing 767-300 with 30 Polaris seats (the High-J 767 has 46 Polaris seats).

This reduction contrasts to the US major’s stated overall plan to grow premium capacity. United will offer 20% more business class seats to Europe in the first half of 2020 than the prior year. It expects Polaris to be on all of its 777-200ERs from May, and for Polaris to be on 90% of United’s widebodies, including all 777s and 767-300s, by the end of 2020.

Rather than a strategic re-think, the -8s are being segmented for less premium routes. “The missions that we’re going to be using the 788 on are likely to be more leisure-oriented that have lower business class demand,” United EVP and CCO Andrew Nocella said when discussing fourth quarter results.

The -8’s smaller premium cabin will not significantly change United’s premium revenue growth projections since the airline has only 12 787-8s. “It doesn’t move the numbers,” Nocella said. United already has 11 787-10s and plans to receive three more. United has 25 -9s and a further nine on order, prompting Nocella to say “the 789 is the heart of our 787 fleet.” 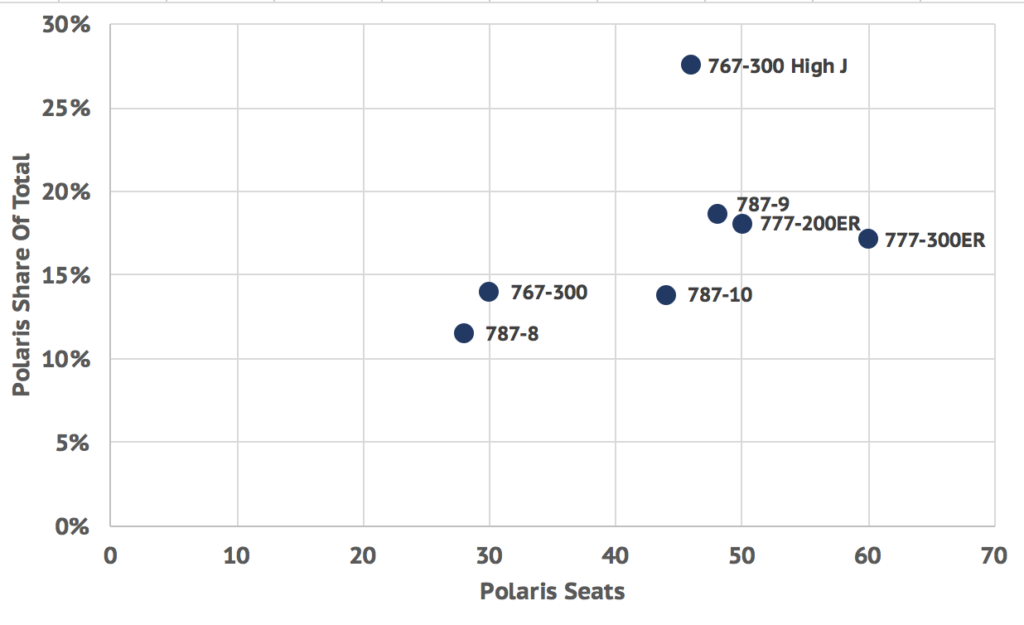 Chart plotting United’s Polaris seats against the share they represent on the aircraft. Image: Will Horton

The smaller Dreamliner’s pivot to leisure markets is in progress. The -8 was used to launch United’s new flight to Tahiti, a clear holiday destination. Yet the -8 is pegged to open United’s new San Francisco-Dublin service, which is a less obvious leisure flight. Current routes for United’s -8s include flights from Denver, Washington-Beijing and San Francisco-Osaka. So the -8 may not strictly be for leisure routes, but also less premium markets.

Nonetheless, Nocella’s point persists that United needs a handful of long-range aircraft with fewer Polaris seats. United’s premium-light strategy is bullish compared to American Airlines, which reduced its -8’s business seats to just 20 (9% of total seats). American’s -9s also have a smaller premium cabin (30 seats, 11% total) than United. American has 42 787s and orders for a further 47.

United’s 787 Polaris retrofit also provided an opportunity for a wider cabin redefinition. The -8’s total seat count increases from 219 to 243, but this might be expected as premium seats are reduced.

The configuration optimization is better evidenced on the -9, where total seats increase from 252 to 257 despite higher demand for floor space. Business seats are kept constant at 48 but the Polaris design requires a larger footprint. United on the retrofit is introducing its premium economy product, Premium Plus.

The -9’s lavatory count remains at seven but seat maps show them replacing closets and a mid-cabin galley unit, in turn allowing for more seats. “We did find a little bit of room in the coach cabin,” Nocella says.

The original -9 had 204 economy seats but the retrofit will have 209 economy and Premium Plus seats – greater seat count and revenue opportunity for the economy cabins in addition to introducing Polaris. Nocella perhaps understates United’s achievement, remarking, “The aircraft has more seats in total, but we didn’t lose any J seats on that.”