Cramped seating, grey walls and a bad conscience: for many, air travel remains both indispensable and not always comfortable in 2020. The Crystal Cabin Award points the way to re-inventing the aircraft cabin. The independent award for cabin innovations and on-board products is the aircraft interiors sector’s most highly regarded honour amongst media and the industry alike, and it is being presented for the 14th time in 2020. There is no shortage of fresh ideas — never before have so many ideas been submitted. 105 concepts from 21 countries made it to the shortlist — a new record for the seventh year running.

It’s not only the passengers that the Crystal Cabin Award wants to look after. The industry is also exploring ways to achieve lasting reductions in the CO2 footprint to lower the impact on the environment. Entrants include airlines, suppliers, universities and major aircraft manufacturers — put simply, a who’s who of the industry. On 31 March, the international expert jury, gathering at Aircraft Interiors Expo in Hamburg, the world’s leading trade fair, will decide just who gets to raise the aviation industry’s most coveted trophies this year.

From coffee table to spa: flexible solutions for the cabin of the future

Seat rows, an aisle — and that’s it? As a number of submissions in this year’s shortlist show, it’s possible to revolutionise the way we imagine the cabin layout. Why not spontaneously reconfigure the cabin on a flight-by-flight basis? If Dubai Aviation Engineering Projects has a say in it, the Retractable Aircraft Cabin will allow whole rooms, from restaurants to spas, to be inserted into the aircraft cabin during ground handling. Flexible cabin configuration is on the agenda at Airbus, too. The aircraft manufacturer’s “Cabin Vision 2030” presents an extension to its “Airspace” concept, equipping the cabin with more flexible seating and sleeping configurations along with exchangeable modules. Is a coffee shop a better working environment than an aircraft? Students at the University of Cincinnati have developed a concept with a long coffee table in the cabin. They have probably prepared for an exam in a café themselves… 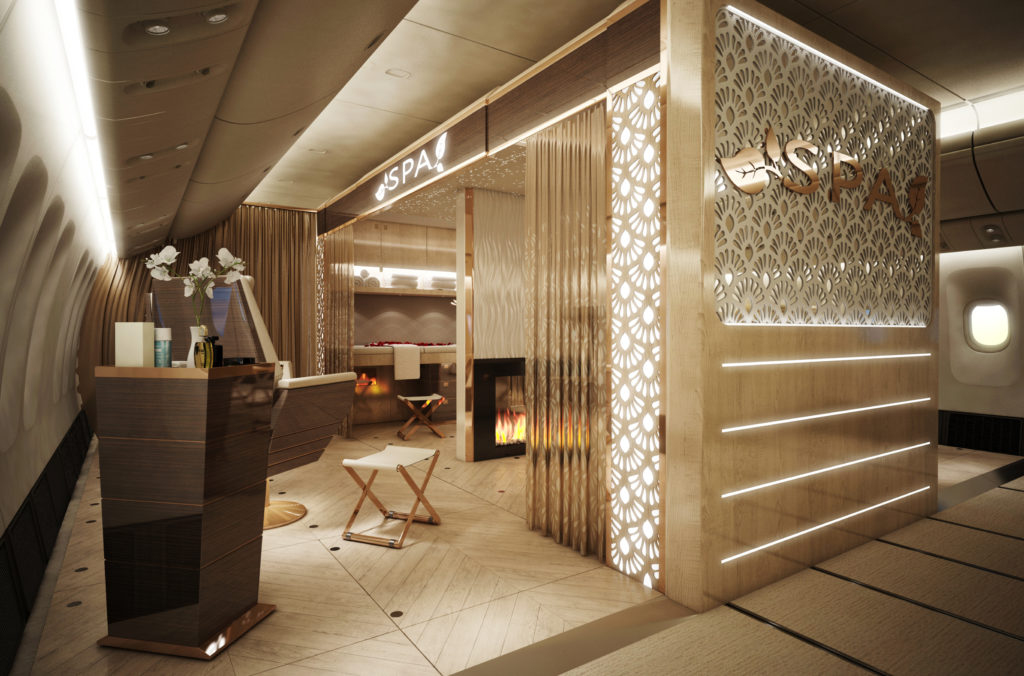 This is the future: a cabin concept for air taxis

Let’s be honest: travel is, and will always be, especially comfortable for passengers with a little cash to spare. With a touch of “Zen”, Acumen has made the shortlist with “The Room”, a luxurious Business Class for All Nippon Airways, combining modern, Japanese style with features such as the widest seat in its class so far. Virgin Atlantic’s “The Loft”, created for the airline’s first A350-1000, features mood lighting in the entry area as passengers board, transforming the area to an exclusive lounge and bar for premium class passengers during the flight. In a first for the Crystal Cabin Award, a cabin concept has been submitted for VTOL (vertical take-off and landing) aircraft. Safran, in collaboration with Uber, has entered a four-seat layout for eight- minute city flights in electric taxi drones. 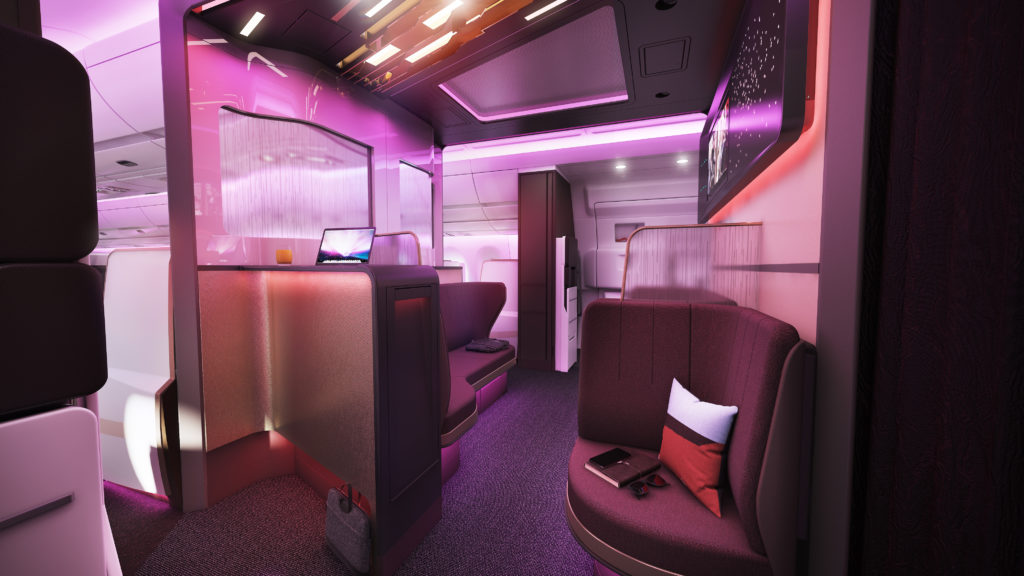 Even “cattle class” can be made more comfortable. Hamburg-based Heinkel proves the point in this year’s Crystal Cabin Award with a mechanism for rotating aircraft seats to create a “Flex Lounge” with four passengers facing each other. Shortlisted entrant Adient adds an extension/retraction mechanism to the seating row behind the partition separating Business Class from Economy, often used by families, creating a large single surface for parents and children to lay down together. Sahngseok Lee, responsible for the idea, already won a trophy in 2019 as a student in the “University” category. Emirates has entered with the “Eco Seat”. This significantly reduces seat weight whilst increasing comfort and legroom compared to earlier seat generations. 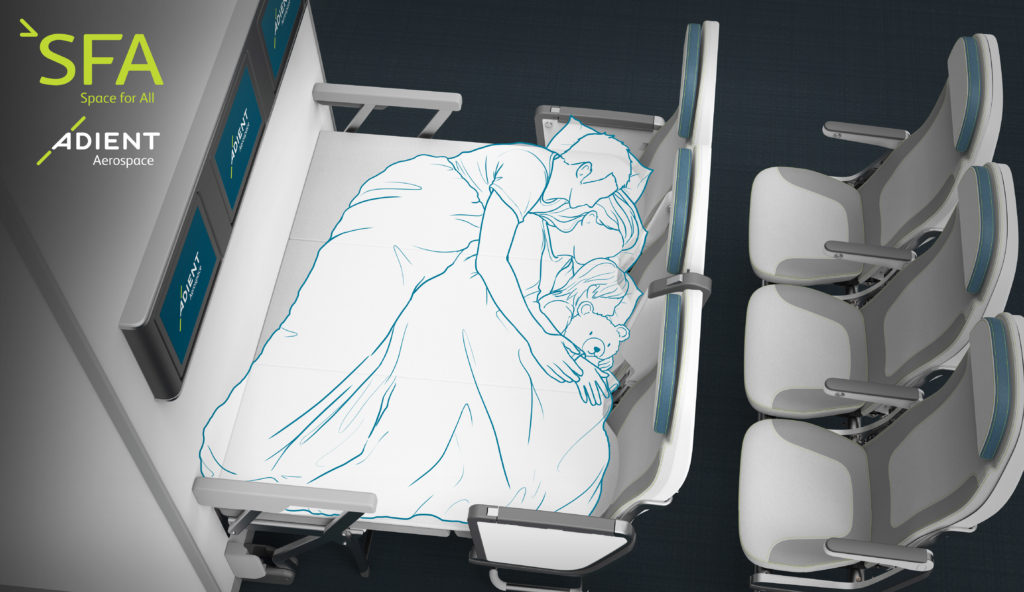 Experts estimate that the aircraft cabin itself is responsible for approx. 5-10% of an aircraft’s CO2 emissions. In 2020, this makes ideas for a “greener cabin” more relevant than ever. The “Greywater Reuse Unit” from Diehl Aviation is a case in point. Instead of precious drinking water, it uses water from handwashing in the basin to flush the toilet. The result: a saving of up to 550 tonnes of CO2 per year for a single Boeing 787. Anyone for coconut wood? PriestmanGoode is working to reduce the use of plastic during air travel with its ZERO Economy Meal Tray. In the future, meals can be served in edible, biodegradable or recyclable materials. Fuel savings to reduce environmental impact are the aim of Comprisetec from Stade near Hamburg, too. The company has developed a Catering Standard Unit from recycled carbon and glass fibres. The catering containers are normally made of aluminium, but the new composite construction makes them lighter. 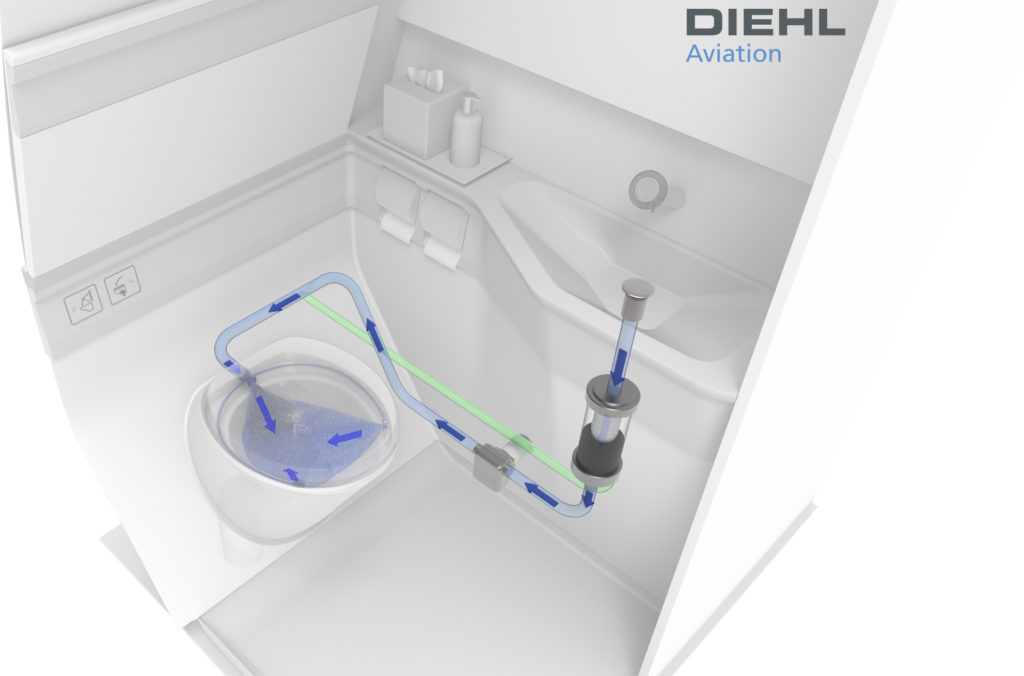 “Airpods” may still baffle some people, but more and more passengers are using wireless headphones in aircraft today. Several entries look at ways to use them in combination with in- flight entertainment, such as the Bluetooth Audiosystem from IFPL. In 2000, JetBlue pioneered the integration of screens in every seat. Now, aware that passengers travel with smartphone and tablet, the American airline is offering the “Multi Screen Experience”, facilitating binge watching and surfing in parallel at the highest quality on all devices. Flymingo NEXT from Moment goes beyond classic “in-flight entertainment”. In addition to wireless streaming, the hardware integrates “Internet of Things” (IoT) technologies for the crew, indicating, for example, seat occupancy and baggage locker use. 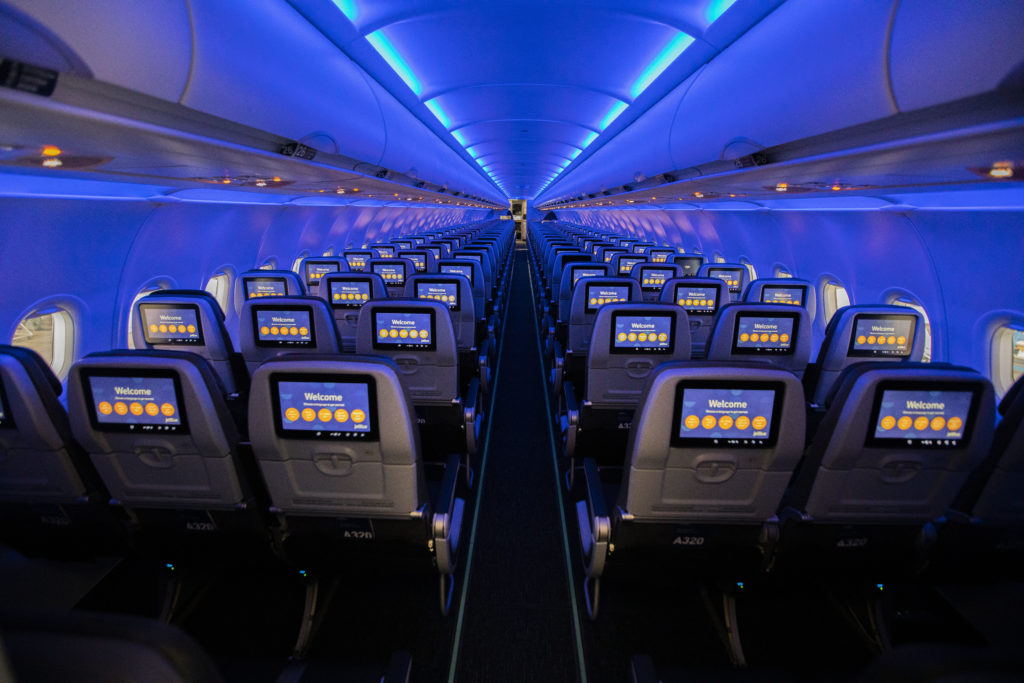 There’s more behind the scenes: innovation in the cabin wall

Several submissions in this year’s Crystal Cabin Award are taking up the fight against the grey cabin wall. AERQ, a joint venture of LG and Lufthansa Technik, aims to make the partitions between classes almost invisible. Instead of partition walls, transparent screens will show passengers information and offers from the airline. SFS Intech and Hamburg start-up jetlite have entered lite2fix, an innovative method for attaching the cabin walls. This will not only make it easier to integrate the wall shells in the fuselage, but also expand them with tailored LED panels. These can be used to identify emergency exits or for lighting concepts developed by jetlite to reduce jetlag. 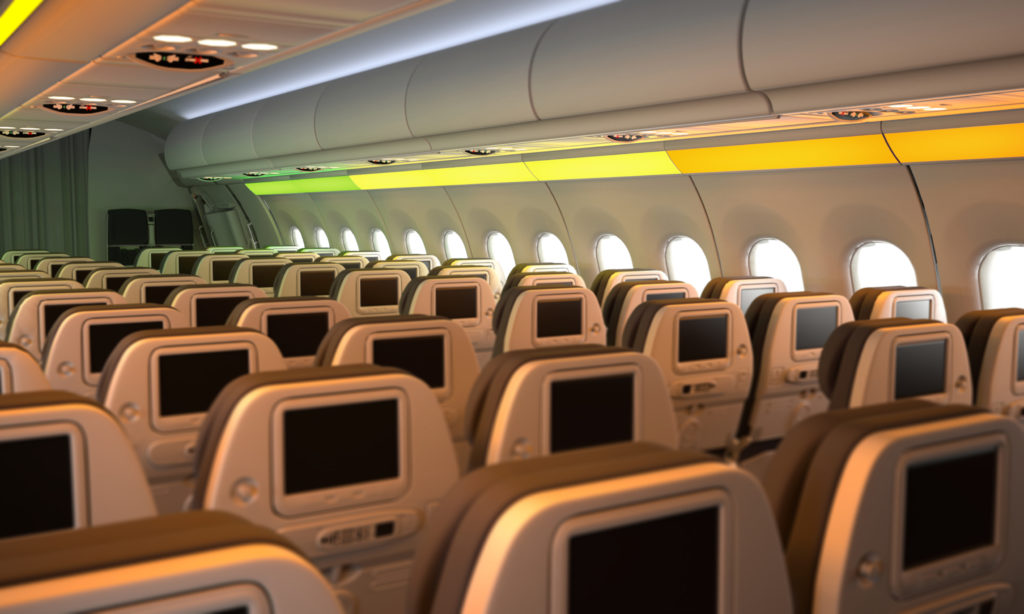 Sleep is the new gold: ideas for refreshing flight

Other Crystal Cabin Award entries this year are focused on a refreshing flight experience, too. The Sleep care app from STELIA provides the passenger with sleep and nutrition tips before the journey, based on his or her behaviour, and informs the crew to make sure that meals are served in flight at times suited to individual sleeping patterns. And to make sure the crew is more refreshed on arrival, too, Collins has developed a folding bed, the Zero-G Attendant Seat, for crew members to relax in the entry area. 18.5 hours in the air? Qantas in cooperation with Charles Perkins Centre Health and Wellbeing in the Air has submitted a whole raft of fitness exercises, lighting concepts and more to make sure that “Project Sunrise”, the direct flight from Sydney to New York or London, will not just be a “Tour de Force” leaving passenger completely exhausted. 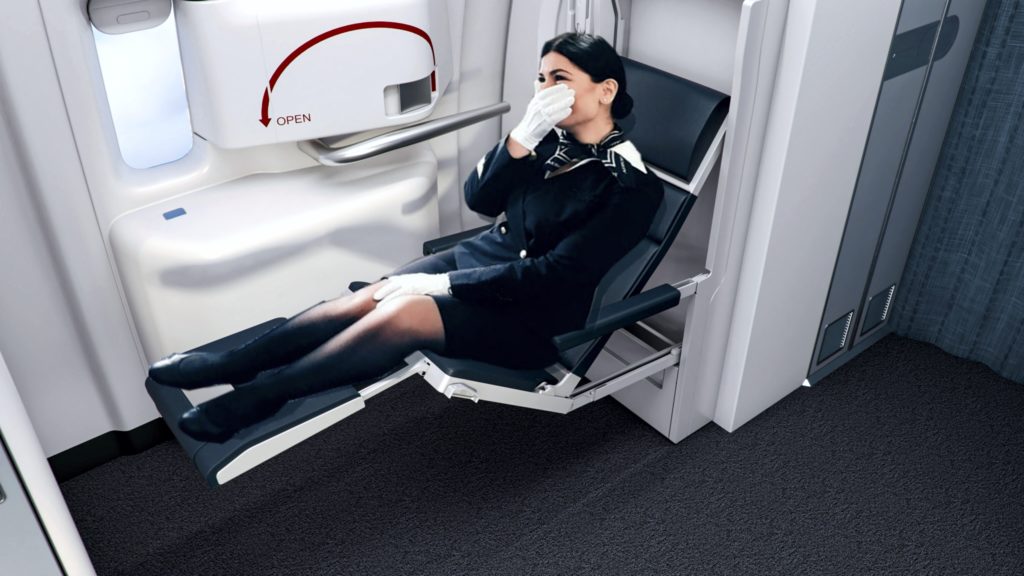 Flying remains a challenge for families with small children and people with physical disabilities. In 2020, once again, shortlisted Crystal Cabin Award entries include a range of ideas for these target groups. The University of Applied Sciences Hamburg has developed Isotravel, an adapter that makes use of proven Isofix technology to allow child car seats to be safely installed in the aircraft cabin. Swiss company Aircraft Innovations also wants to transform the Economy Class seat into a child-friendly environment. Its Junior Comfort Seat consists of an inflatable element to protect the child from falling into the footwell. The Row 1 Aircraft Wheelchair from Ciara Crawford simply slides above the aircraft seat, saving passengers with walking difficulties from getting out of the wheelchair between the gate and the cabin. 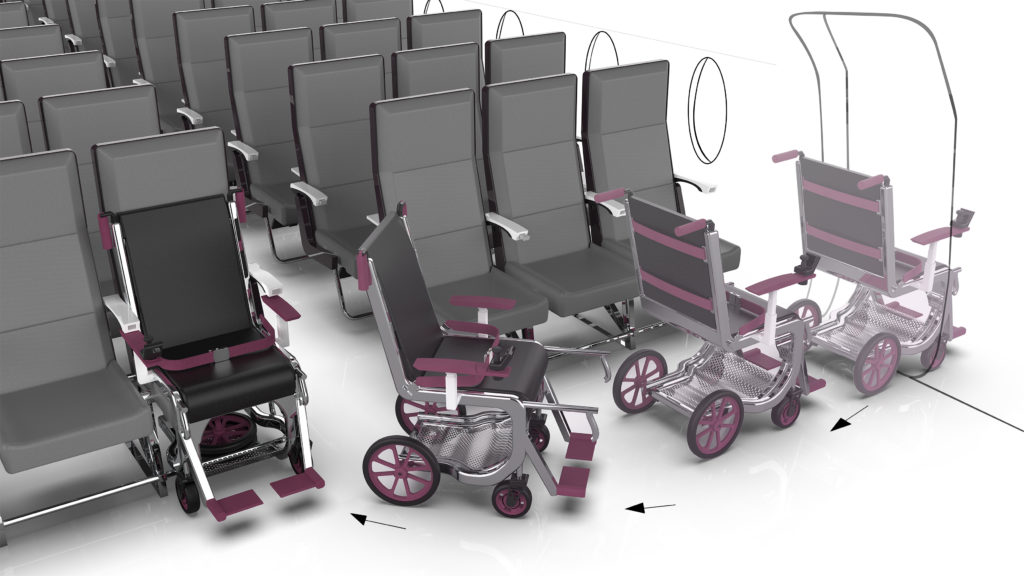 The Crystal Cabin Award, an initiative of cluster Hamburg Aviation, is presented in eight categories: “Cabin Concepts”, “Cabin Systems”, “In-flight Entertainment and Connectivity”, “Greener Cabin, Health, Safety and Environment”, “Material & Components”, “Passenger Comfort Hardware”, “University” and “Visionary Concepts”. For each category, the 27 expert members of the jury select three finalists, announced at the beginning of March. The finalists get to pitch their concepts to the jury in person at the world’s leading trade fair for aircraft cabins, the Aircraft Interiors Expo (31 March – 2 April in Hamburg). The winners of the 2020 Crystal Cabin Award will be announced at a gala dinner in the trading floor hall of the Chamber of Commerce on the evening of 31 March.