It is something of a truism that no new airline seating product enters into service entirely smoothly. So it was with the table situation on the new Safran Cirrus NG product on Virgin Atlantic’s new A350s, and so it is with the Collins Aerospace doored Super Diamond Club Suites on British Airways’ XWBs. The issue this time is around the user interface design of the doors, which have a bright red emergency egress handle that it seems too many passengers are pulling erroneously to simply open and close the door. 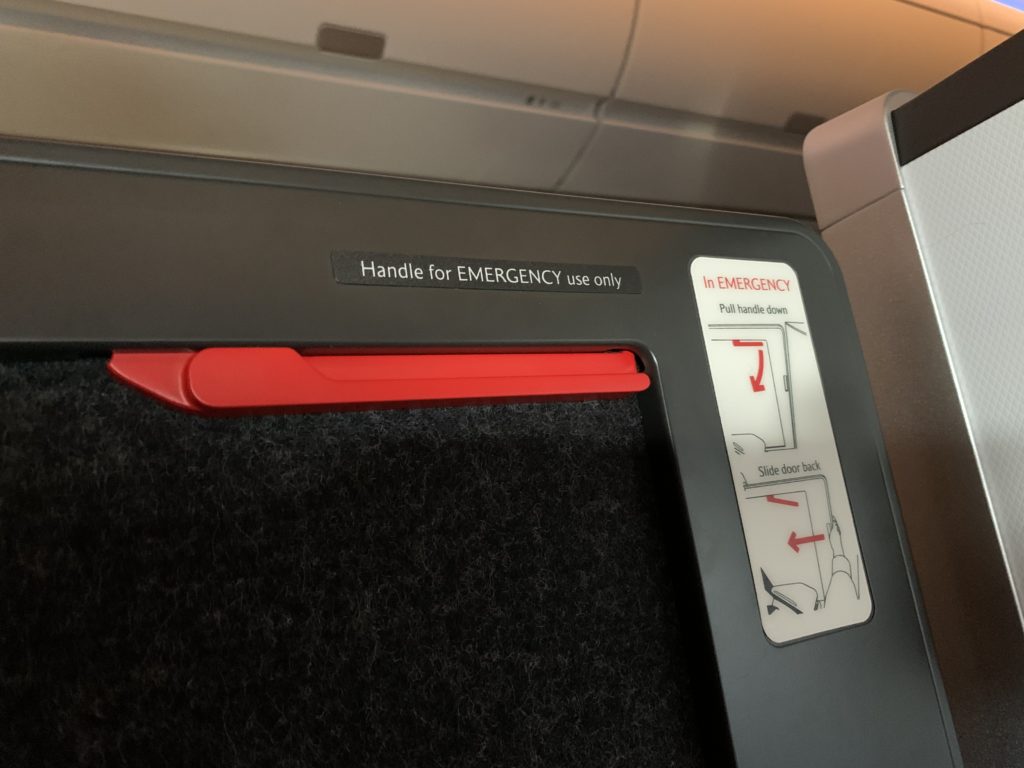 There are two separate placards highlighting that the red handle is for emergency use. Image: John Walton

In practice, the mechanism is interesting, although its actual internal workings are unclear. In the event that the door gets stuck, the red handle is pulled, and in action it seems to dislodge the door from its slides, allowing it to roll substantially more freely back into its retaining position. Collins provided some details on the actual methodology, on which more later.

In order to return the door to its normal method of movement, a concealed second handle must be pulled upwards at some substantial force. This is required in order to set the door to the secured takeoff and landing position. 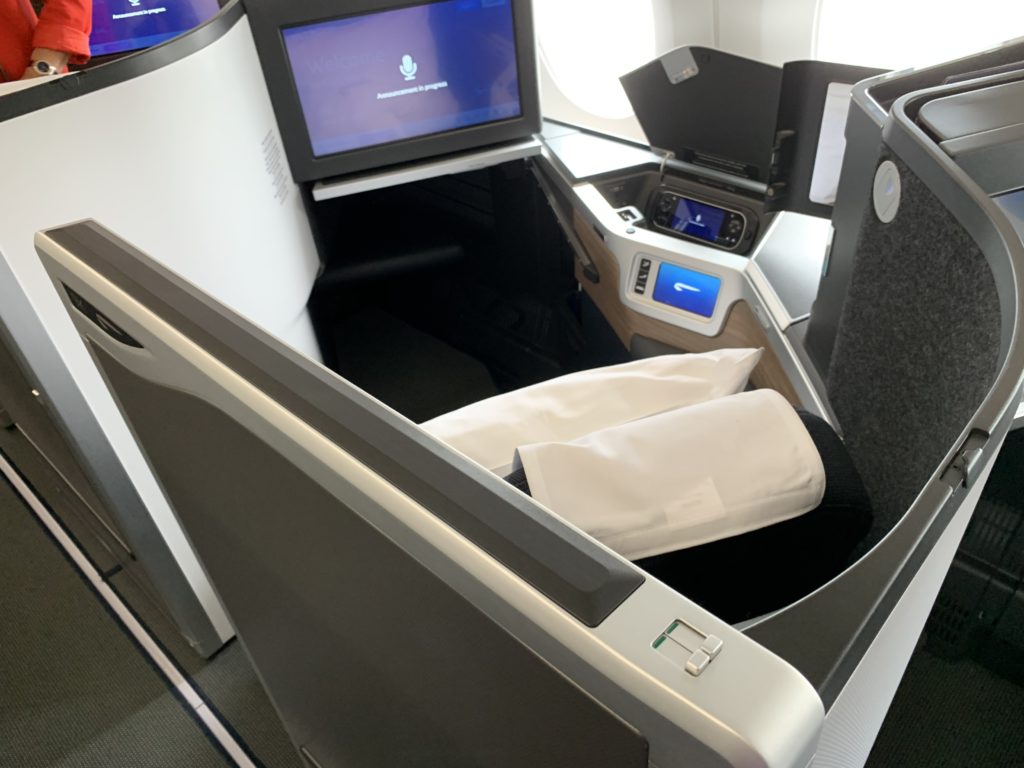 The doors must be locked into the takeoff and landing position with the two switches.Image: John-Walton

On two recent flights aboard the British Airways A350 — which, full disclosure, British Airways provided along with connecting intra-Europe flights to enable a review — staff explained to Runway Girl Network that a significant number of passengers are pulling the red handle to simply exit the seat, which they do not have to do: it slides forwards and backwards without the need for a handle.

As a result, the staff explained, they are having to perform substantially more resets, which takes up a fair amount of time. The mechanism, they said, is being redesigned for future deliveries, although the staff could not say when the change will happen or which aircraft will be covered.

Interestingly, this door mechanism is the one that Collins showed as part of its Elements next-generation herringbone at this year’s Aircraft Interiors Expo, which was a change to the version seen the previous year. 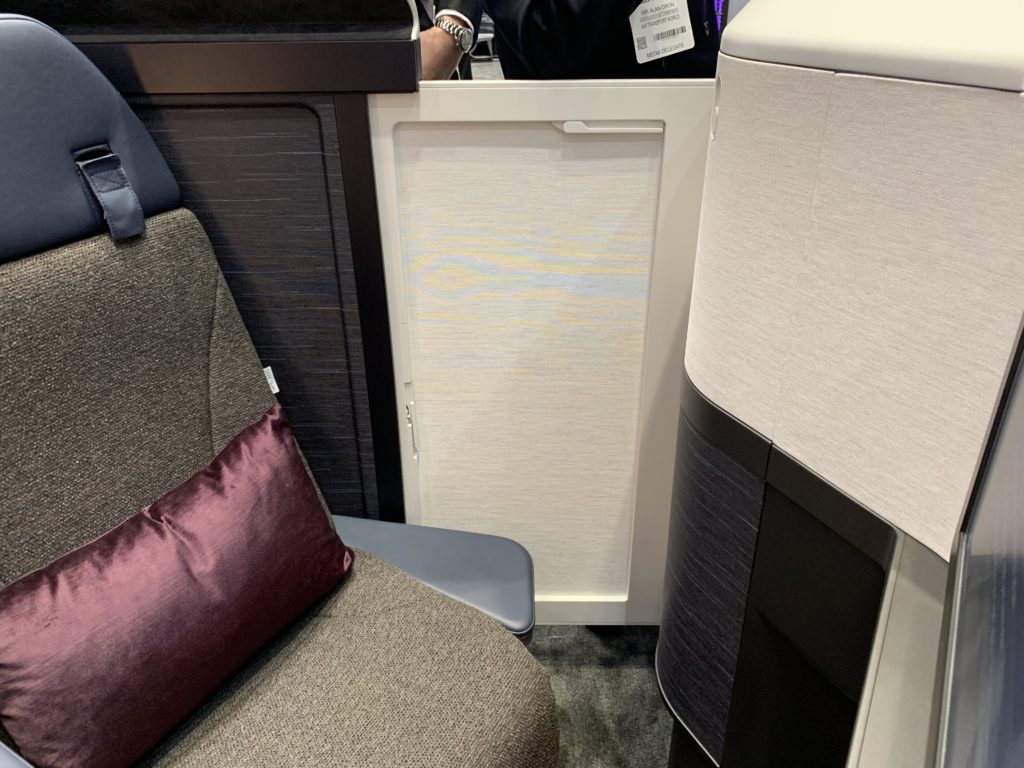 The handle, seen here on Elements at AIX 2019, is the issue. Image: John Walton 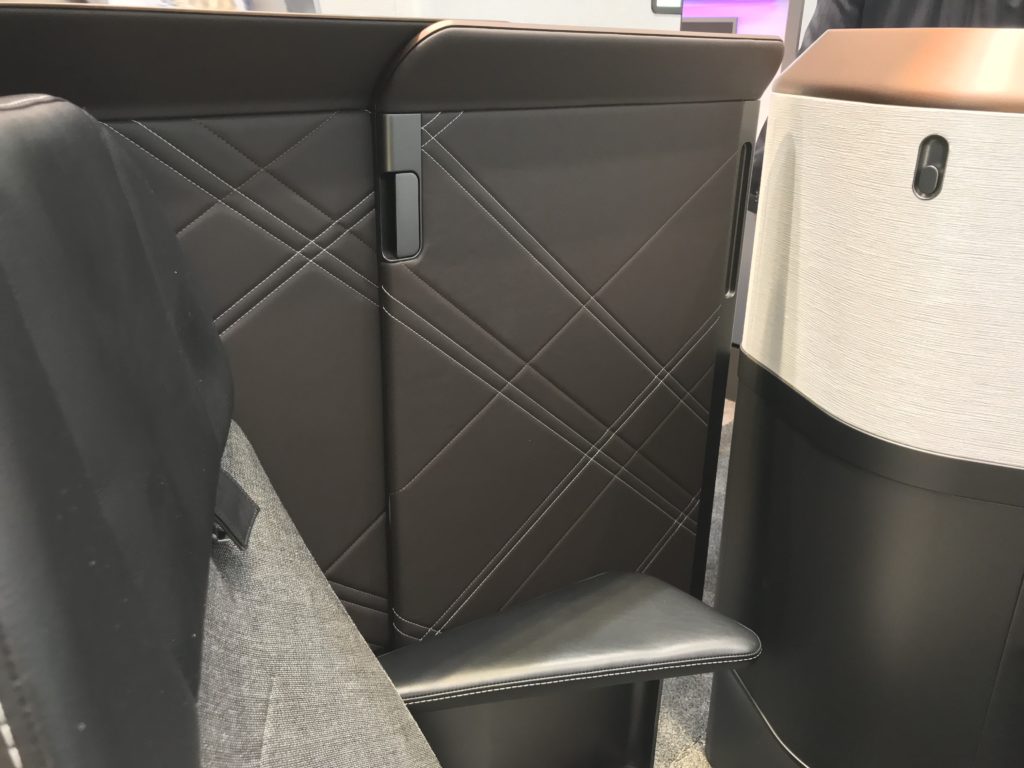 It might appear, though RGN has no confirmation, that this handle issue may well have been spotted relatively early in the design process, given that the handle is red — unlike the Elements version seen at AIX. This change could be regulator-driven, given that Qatar’s Qsuite has a red activation lever for its own emergency passage feature. There are also two separate placards stuck on the doors, reinforced by announcements from the crew, explaining that the handle is for emergency use only.

RGN contacted Collins Aerospace with questions on the subject, and received written responses from Mark Dowty, the seatmaker’s director of business development and engineering for interiors.

First, we asked, given discussions earlier this year around mini-suite certification, were break-away doors or pull-down panels still required by the regulator?

“The terms ‘break-away’ or ‘pull-down’ do not appear in the regulations governing suite doors. These are generic terms used to describe different methods used to meet the requirements. However since the regulatory requirements do not use this language, the nomenclature can be confusing. The regulatory agencies typically state the safety requirements more generally,” Dowty explained, citing Special Condition D-37 [PDF], which states, as subsection 14,

In addition, the mini-suite must have an Emergency Passage Feature (EPF) to allow for evacuation of the mini‐suite occupant in the event a door closes and becomes jammed during an emergency landing. The EPF must provide a free aperture for passage into the aisle consistent with SC 13 or meeting the requirements of CS 25.807 applicable to a Type IV size emergency exit.

This, Dowty notes, “allows for innovations regarding the design of devices to meet the regulation. In the case of doored suites, an overview of the industry shows a variety of solutions to meet the EPF portion of the rule. For single door suites for example, they can be described as doors the can be removed, e.g. Qatar Qsuite, or doors that can move, e.g. the New BA Business Class.” 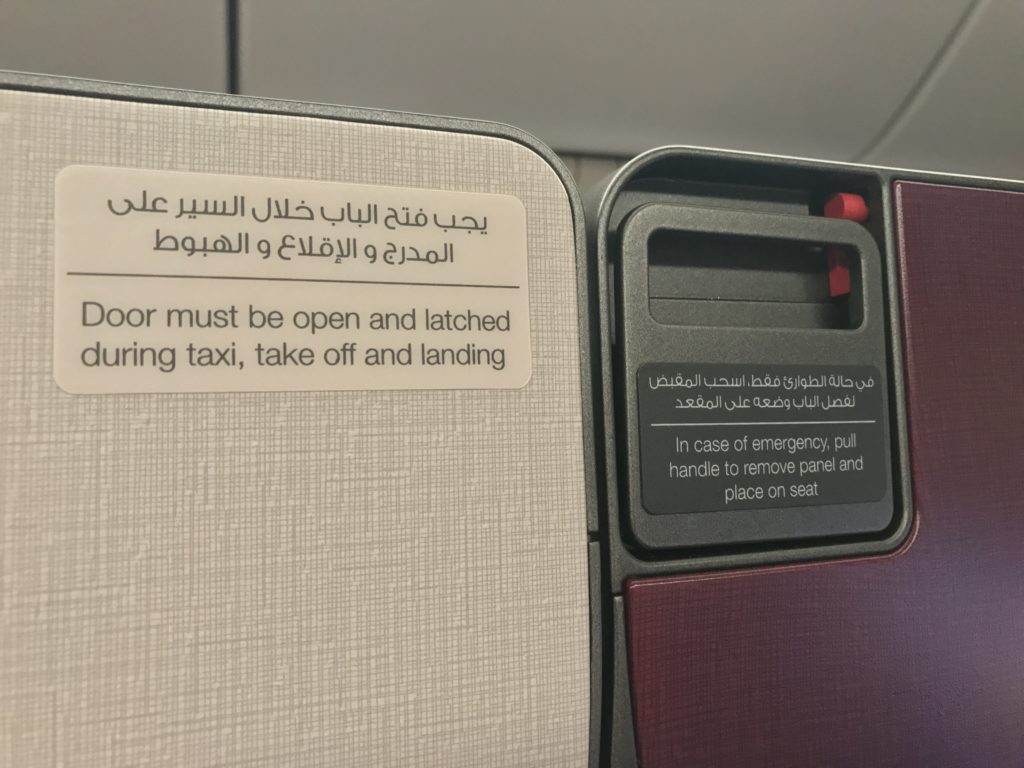 RGN asked for confirmation that the understanding given to us by the British Airways staff about the door’s operation were correct: namely that the doors slide on an upper rail, and in the event this system is blocked the red handle derails the door from the upper rail to then roll along the ground.

Dowty declined to answer the question, stating that “details of the inner mechanism of the door design are proprietary. It is incorrect to state that the result of the emergency egress activation allows the door to ‘roll on the ground’. However it is correct to state that the emergency egress is activated by pulling the red handle which allows the door to slide freely into an open position in the unlikely event that the primary slides malfunction.”

RGN also asked Dowty to clarify the information from BA staff that there are plans to adjust the design of this mechanism as a result to reduce the inadvertent activation of the door handles. Dowty neither confirmed nor denied these plans.

“When designing a safety feature, there is always a compromise to make its activation simple, obvious and intuitive while reducing unintended use. Months of study and evaluation resulted in a system that meets its primary objective of rapid and intuitive evacuation — even under stress,” Dowty noted.

“To address the anticipated issues inherent with a new feature such as this, our engineering teams designed a unique ‘reset’ device that quickly restores the door to its design position. We chose this route intentionally and in conjunction with BA and the regulatory agencies, recognising the overriding need for safety.” 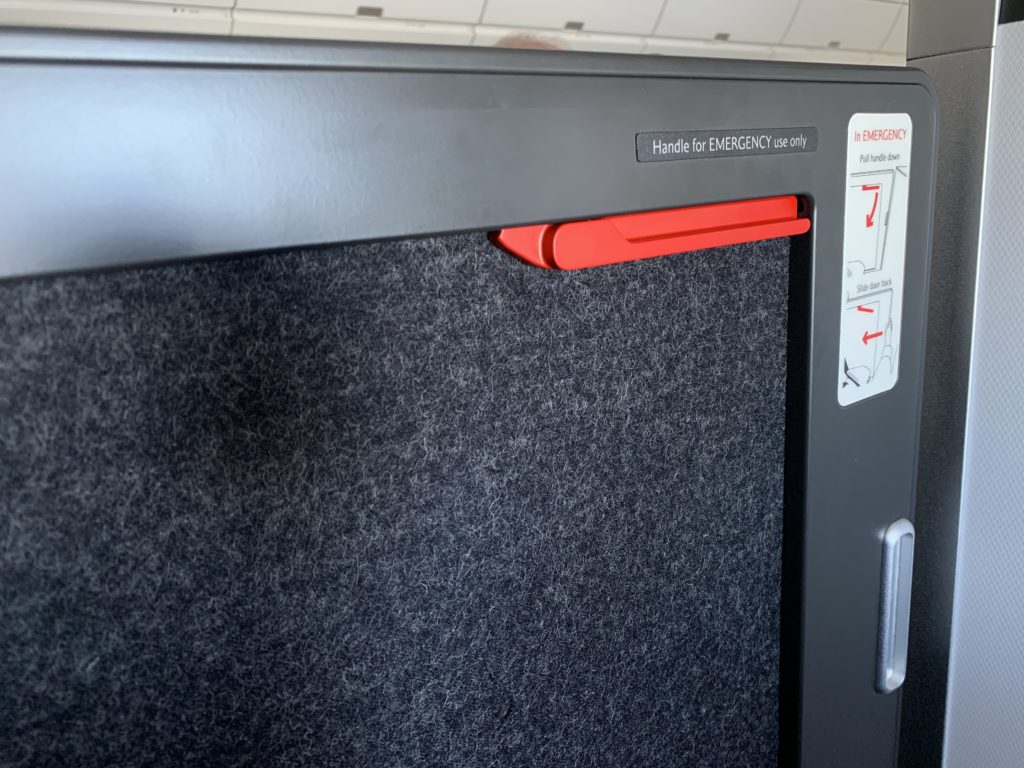 In-service experience, based on both that of this RGN journalist and the explanations from the British Airways crew, suggests that this reset device is neither quick nor simple enough for the airline’s liking. While the second less visible lever is present, it is somewhat awkward to activate from outside the suite, and requires some force to use.

Collins, through Dowty, also confirmed that the regulator concerned, in simplified terms, is EASA through a bilateral agreement with the FAA. EASA did not respond to questions from RGN.

Dowty declined to answer further questions about the future plans for this mechanism, stating that “details of any new designs are proprietary. However, at Collins Aerospace we actively practice a strategy of continuous improvement so all of our designs are examined based on the in-field experience of our customers.”

British Airways provided flights (and intra-Europe connections) to enable a review of this product.