When industry stakeholders started considering how Li-Fi might be deployed in aircraft cabins, certain naysayers predicted that the cons would outweigh the pros, and we’d be lucky to see it roll out in our lifetime.

Li-Fi leverages light to send information, in contrast to Wi-Fi, which uses radio waves. Though it has proven capable of transferring data at several Gbps, Li-Fi requires line of sight, and no blockage, which is tough in a crowded cabin with people moving about and with so little personal space.

But the notion that Li-Fi might simply be positioned as a Wi-Fi replacement on board shows a lack of imagination. And Astronics Corporation – which has been exploring ways to use Li-Fi to improve the passenger experience, crew life, and aircraft health monitoring – rebukes such a limited vision for the technology.

To be sure, Astronics showcased some pretty nifty Li-Fi-to-laptop demos at the recent Aircraft Interiors Expo (AIX), as it did during last year’s APEX Expo in Boston, where a Li-Fi display – representing a collaboration with Li-Fi’s visionary creator, pureLiFi – supported 40 Mbps transmissions, and streamed HD content from a visible passenger service unit (PSU) light.

But for this year’s AIX in Hamburg, Astronics brought second-generation technology. “It’s 80 Mbps and it’s actually infrared, because one of the beefs people had was ‘we don’t want the light on’ so this is invisible light and it’s twice as fast. So, we’re streaming a 4K movie here,” explained Mark Schwartz, vice president of PDT, an Astronics company. 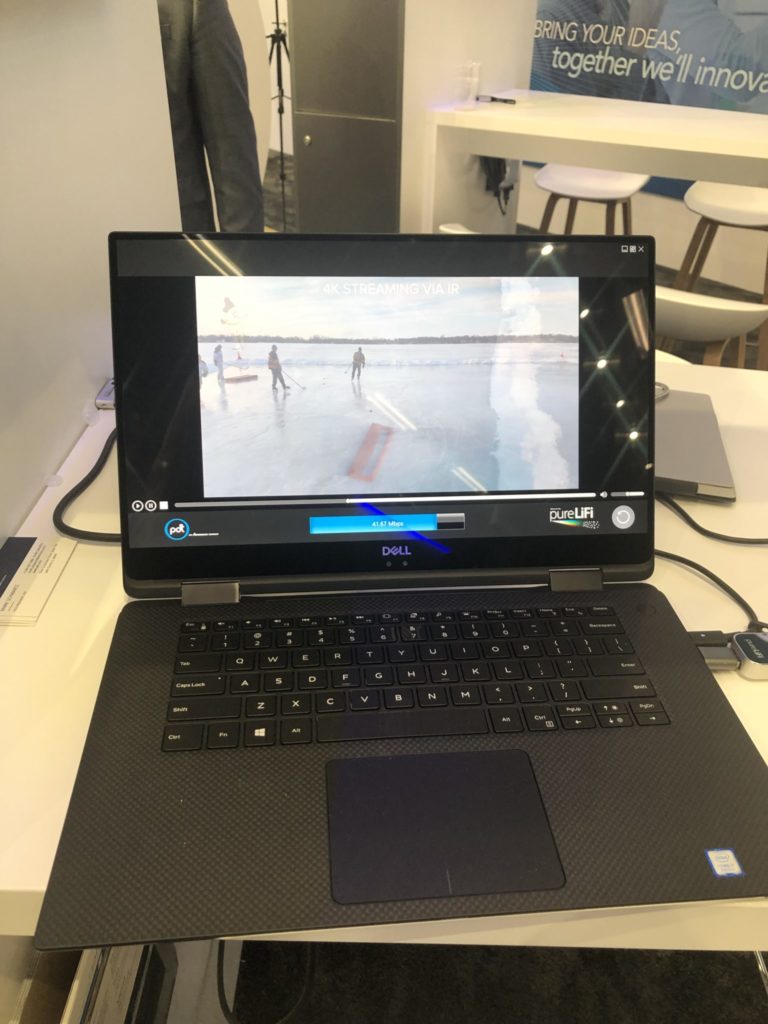 Going forward, said Schwartz, the next generation of Li-Fi “is going to be on a custom chip, like less than the size of a penny and it’s going to be even faster than this. So eventually, I believe it’s going to get into the iPhone in a few years, and they’re already part of the IEEE standard, 802.11, so they’re legit in the certification perspective and from my technical due diligence of testing the thing, it’s legit. It works really well.”

From a safety perspective, he said, “actually, Li-Fi is mostly regarded as much safer than RF. So, for example, you can’t use RF in intrinsically safe environments like on an oil rig, because there is a flammability hazard. There is no EMI given out by Li-Fi so it’s actually safer.”

But back to the use cases. Is Astronics positioning Li-Fi as a wholesale replacement for Wi-Fi in aircraft cabins? Absolutely not. Firstly, the firm sees Li-Fi as an augment to Wi-Fi, working in lock step to support the IoT of the aircraft cabin.

The problem with RF is it has limited bandwidth within the spectrum you’re in. So, if an airplane gets smart, and uses Wi-Fi for sensors and things, and the passengers have higher demands for IFE and higher resolution screens, and then the pilots are using it, you’re going to run out of bandwidth on the plane. You can’t just keep adding WAPs.

You know that if all of us got on the Wi-Fi right now, 55 of us [executives on Astronics’ AIX stand], it would go really slow. So I think the first application should be the embedded systems within the cabin, so either the embedded screenbacks – where the passenger doesn’t even know it exists [and] there is a good line of sight to the receiver – or even like the big screen in the cabin, where you’re streaming down to that.

I think those are really good applications because it just takes some work away from the RF and leaves that for the passengers. Because the fact is, you only have Wi-Fi on your devices right now. Like I said, in two or three years, you’ll have Li-Fi on your COTS device too, or your PED. Once that happens, it should proliferate even more in my opinion because it works really well. And it’s actually true that Li-Fi is now part of the 5G framework because what they’re afraid of is that that’s going to run out of bandwidth when the needs of RF get so high that they’ll layer Li-Fi on top of it so in other words, you may have Li-Fi and Wi-Fi in your house working together.

But beyond Wi-Fi augmentation and cabin IoT usage, Li-Fi could transform inflight entertainment, according to Swartz. Noting that the “current state-of-the-art” for IFE content loading still involves a lot of touch labor and in many cases the use of sneakernet every 30 days to put a month’s worth of content on the aircraft, Schwartz envisages a world where Li-Fi is utilized to change the content every time an aircraft arrives at the gate.

It starts with an airline app, he said, and a large central server. If you created an opportunity for passengers to preselect their inflight entertainment content via the app – and heck, even order McDonald’s to be delivered to the aircraft – then the airline knows of these preferences, and can deliver a truly personalized experience to the passenger, with tailored advertising, by using Li-Fi at the gate during the aircraft turnaround time.

“You don’t need a month’s worth of content anymore. So you could have a much smaller, more efficient, less power, less hot server [on board the aircraft] so less expensive for the airlines. I’m only carrying one flight of content now, so guess what? I can have a much wider variety of content because I’m not trying to carry a month’s worth that 80% of the people don’t even watch most of it anywhere. And if you’re a frequent flyer, there’s nothing more frustrating than getting on a plane over the course of a month over and over again, it’s all the same stuff. I’ve already seen it. It’s irritating.”

Your writer is reminded of other technologies (which do not involve Li-Fi) – including Thales GateSync and Panasonic Zero Touch – which have sought to support rapid data transfer and reduce touch labor to improve IFE for passengers. But in the following video, Astronics’ Schwartz explains how Li-Fi could be used to effectively ‘flip the server’ at the gate, and securely transmit data for a much more personalized experience. He also discusses how airlines could use Li-Fi to rapidly download maintenance records, aircraft health data, crew information, and indeed e-commerce info to support the likes of fast food delivery to the aircraft.

A person would literally have to run into the light to hack it, stressed the Astronics executive, noting, “it can’t be jammed, it’s line of sight and it’s really fast.”

And what if you don’t want to grind up the cement and install the receiver in the ground? Then put it on a luggage cart or a food cart, suggested Schwartz. Unsurprisingly, Astronics – among the leading suppliers of PSUs and other aircraft lights – feels rather well-placed to support the aforementioned scenario.

“Any LED can be modulated and Wi-Fi-enabled so Astronics already makes LED-based landing lights, for example. So there is no reason why these can’t be Li-Fi-enabled,” said Schwartz. “They’re already on the aircraft. Yes you would have to wire them to the server, but you would have the external part of it done, right, because you can modulate these. Again you can use wingtip lights, landing lights, you could do a connection to the terminal itself, you could do a connection from the jetbridge. So while it is kind of a hardship that you’ve got to change the airport facility, if you think about the ROI of eliminating all the touch labor plus happy passengers that you’re learning a lot about, it’s totally worth it. And the last thing is that it takes the stress off of the satcom system, Why would you pay tons of money for satellite time, streaming things, when you can do it more intelligently on the ground by flipping the server at every turn?”

He continued, “Think about our portfolio. We own interior lighting. We own the PSUs, which are the lights over your head, we own all the wingtip, landing lights, and all the external lighting on the aircraft. We’re the connectivity guys; we’re the IFE and IFC providers. So this technology is going to go mainstream. It’s just a matter of time in my opinion. And I think we’re super well situated because of all these other complementary technologies. The enablers – we own the enablers.”