IATA has launched a new platform that will give airlines greater visibility into one of the more significant yet unpredictable hazards they confront in the skies: clear air turbulence.

The so-called Turbulence Aware Platform provides a framework to identify, measure, and share information on turbulence that, when combined, can map these invisible trouble spots, helping airlines avoid hazards and fly more efficiently.

“If there is no turbulence, then the aircraft sends a message every fifteen minutes, plus or minus. It depends on your set up. If you are flying for a couple of hours, you would have less than ten reports,” IATA meteorological program head Katya Vashchankova tells Runway Girl Network.

“If you hit turbulence, then it reports every minute until the threshold is back to normal. In those instances, it compiles various reports at once. It’s not that many messages and the messages themselves are quite light – some aircraft id data, time stamp, positioning, altitude and turbulence value.”

Because the success of the program over the long-term depends on having as many active data-points shared as possible, the platform is designed to work with airline’s existing technology framework. The messages themselves are transmitted by ACARS and gathered through IATA’s ARINC address. Data are compiled and processed through a dedicated platform developed by Snowflake software in the UK. Once anonymized and checked, data are re-distributed to participating airlines through ground-to-ground connections so that airlines can integrate the data into their flight planning and inflight tools for operational personnel and pilots. Global data will also be available to view as a graphical display on a web-based Turbulence Aware Viewer.

“How an airline chooses to update their pilots is up to them,” Vashchankova says. “We put all of the information together and let them choose from the options that suit their operations … Some will use it for their dispatch, some will prefer to alert the pilots.” 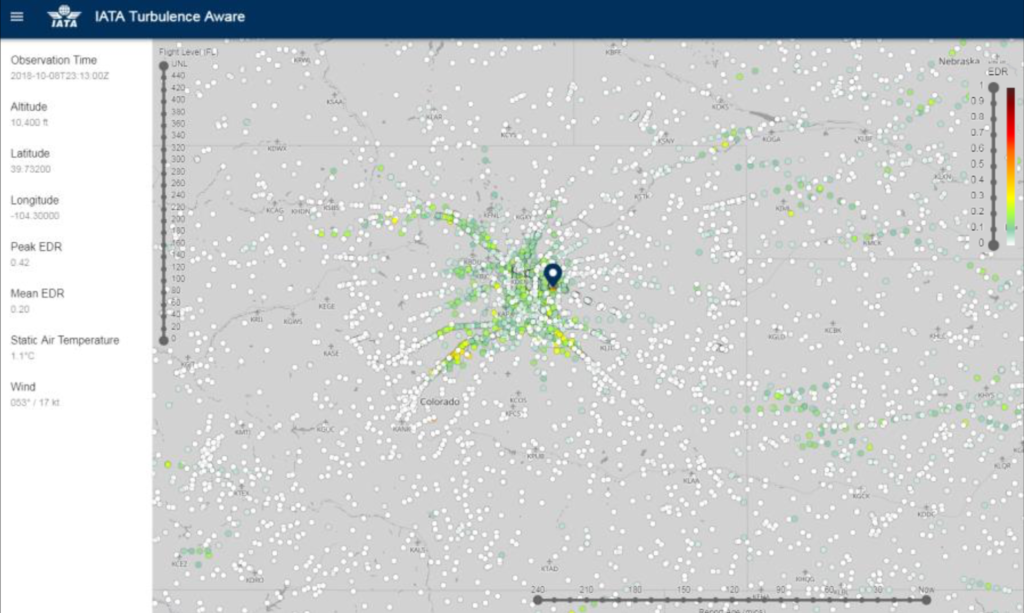 This is a snapshot of the Turbulence Aware Viewer. Color-coded turbulence reports are presented on a map. The white dots represent areas of no turbulence, while the colored dots represent the different intensity of turbulence as per the scale on the right. The Flight Level filter on the left can be used to assess the intensity of turbulence at different flight levels. The time slider at the bottom allows users to see turbulence reports between now and up to four hours prior. The user can click on the dot and see a detailed report as shown on the left, including time, altitude, aircraft position, mean and peak turbulence values as well as wind and temperature data. Image: IATA

Airlines can update their crew with data gathered through the Turbulence Aware Platform through avionics software updates, or electronic flight bags if they have connectivity on board. This information could also be shared from aircraft to aircraft through ADS-B in the future, but one of the advantages of the platform is anonymity of data compiled.

“Airlines are sensitive to being identified in terms of who turns in those reports,” Vashchankova says, but that may change as they begin to see the benefits of this type of data exchange. “I don’t think it will happen tomorrow but maybe the industry will grow more in that direction.”

The Turbulence Aware Platform has been under development since June of this year through an Advisory Group of 15 participating airlines that include Delta, United and Southwest in the US, as well as Aer Lingus; these were among the first airlines to agree to share their data publicly.

IATA will be making a big push to promote the platform and to get more airlines to participate over the coming year. The association has scheduled a soft launch of the platform in February of 2019, with ongoing integration and operational trials throughout next year. A full launch is planned for January 2020.

In Conversation: All about Australia with Jordan Chong