Nearly one in five (19 percent) Americans “will not vote” or “have a high likelihood” of not voting in November’s mid-term elections, with concerns over outside actors compromising the country’s election voting systems the cause, according to the new 2018 Unisys Security Index™.

The only recurring snapshot of security concerns conducted globally, the 2018 Unisys Security Index also shows that 18-to-34-year-olds are the least likely to vote in the mid-terms, with more than one in four (26 percent) reporting that they “will not vote” or “have a high likelihood” of not voting.

Nearly nine in 10 respondents – 86 percent – express concerns over the prospect of U.S. election voting systems being compromised by outsiders, according to the survey. Only about 40 percent of registered voters traditionally participate in mid-term elections, according to FairVote, meaning security concerns could drive this total even lower, particularly among younger voters.

“The lack of trust in our voting election systems as exposed by the 2018 Unisys Security Index potentially undermines confidence in America’s democratic system,” said Tom Patterson, chief trust officer of Unisys. “The U.S. needs to build on progress made in preparation for this mid-term election cycle, while factoring in that younger voters are the ones expressing the highest levels of concern over the integrity of the process. I am confident that our country will be able to address this dynamic.” 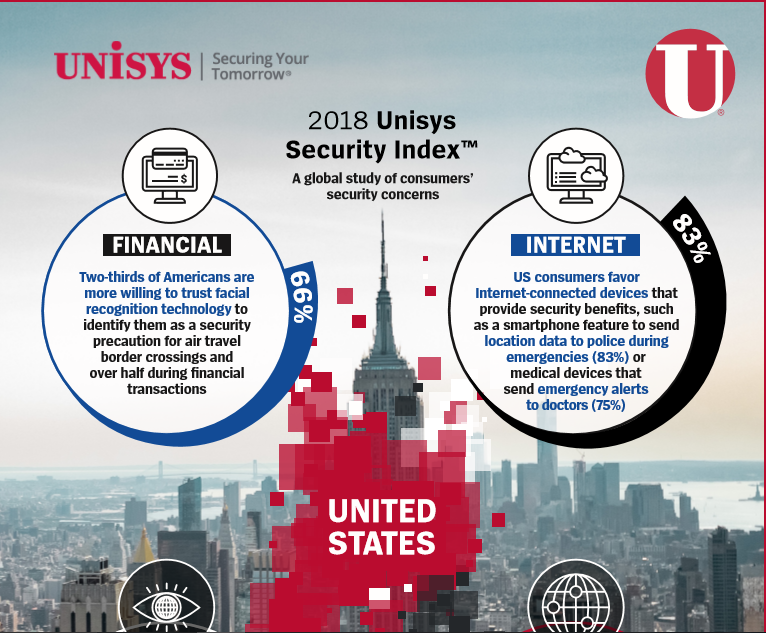 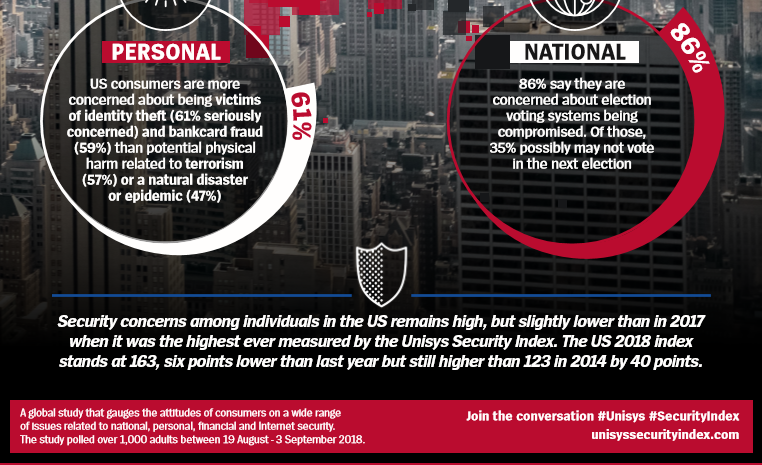 The 2018 Unisys Security Index surveyed more than 13,000 consumers in 13 countries, including more than 1,000 in the U.S., in August and September 2018. It gauged their attitudes on a wide range of security-related issues and attributed an index to them. The index is a calculated score from zero to 300 based on concern about eight specific issues within the categories of national, financial, internet and personal security.

The new survey shows that consumer security concerns in the U.S. go far beyond the integrity of mid-term voting, with the U.S. score remaining at its second-highest level since the survey began 11 years ago. The index reached its highest level last year but dropped slightly this year by six points on a scale of 0 to 300, with 300 representing the highest level of concern. The U.S. index is now at 163, still considered a serious level of concern and the highest among the six developed* countries in the survey.

In all countries, the survey also found that security concerns are higher among younger people, those with lower incomes and women. In the U.S., the survey found 21 percent greater concern among 18-34-year-olds than respondents aged 45-65. U.S. respondents with lower incomes reported 16 percent more concern than higher-income respondents. Unlike in most countries, there was little difference in the U.S. with regard to the level of security concern reported by women compared to men.

“These results suggest that consumers view the internet as scarier than earthquakes, terrorism and wars, largely because they feel they have little control over how to address bad actors leveraging internet-enabled technologies,” Patterson said. “These concerns make it imperative for government agencies and companies that serve consumers to do everything possible to make the online experience safer and more secure, starting with implementing a zero-trust security model.”

About the Unisys Security Index

Unisys has conducted the Unisys Security Index – the only recurring snapshot of security concerns conducted globally – since 2007 in order to provide an ongoing, statistically-robust measure of concern about security. The index is a calculated score out of 300 covering changing consumer attitudes over time across eight areas of security in four categories: national security and disaster/epidemic, in the National Security category; bankcard fraud and financial obligations, in the Financial Security category; viruses/hacking and online transactions, in the Internet Security category; and identity theft and personal safety, in the Personal Security category. The 2018 Unisys Security Index is based on online surveys conducted August 19-September 3, 2018 of nationally representative samples of at least 1,000 adults in each of the following countries: Argentina, Australia, Belgium, Brazil, Colombia, Germany, Malaysia, Mexico, Netherlands, New Zealand, Philippines, the U.S. and the UK. The margin of error at a country level is +/-3.1 percent at 95 percent confidence level, and 0.9 percent at a global level.

Unisys is a global information technology company that builds high-performance, security-centric solutions for the most demanding businesses and governments on Earth. Unisys offerings include security software and services; digital transformation and workplace services; industry applications and services; and innovative software operating environments for high-intensity enterprise computing.

Catering shines on British Airways service between Heathrow and JFK