With the certification of a new high-performance exit slide, Lufthansa Technik and EAM Worldwide are offering an extra choice to airlines that want to densify their existing fleets beyond the initially certified seat count — 180 on an Airbus A320, for example.

While EASA certified a 195-seat A320 in 2015 using both larger doors and larger slides, Airbus has not marketed a LOPA (layout of passenger accommodations) configuration beyond 189 seats. Further, the Airbus solution adds weight, cost and complexity to add nine seats.

This new high performance single lane slide, which Lufthansa Technik and partner EAM characterize as “overperforming” to match the A320’s front and rear doors, uses improved materials and real-world testing to certify an increase of six seats. Will a cheaper, lighter, retrofittable solution that gets two-thirds of the way to the current “max pax” appeal to airlines?

Christian Kurz, senior engineer for cabin interiors in the aircraft modification department within the aircraft base maintenance product division at Lufthansa Technik, tells Runway Girl Network that the work is being done as part of its wider A320 retrofit densification programme, which includes its Skypax rear galley-lavatory combination.

The way regulators classify exit types and sizes also changed in the mid-1990s (after the A320’s certification) with US FAR amendments 25-88. The A320 family’s over-performing type 1 doors were classified equivalent to a type C.

In this context, Kurz says, “the evacuation rate requirements have also changed a little bit,” compared with the TSO-C69a revision in 1987 when the A320 was first certified. “For example, the combined average rate of all test runs during the TSO testing has to be at least 70 evacuees per minute.” 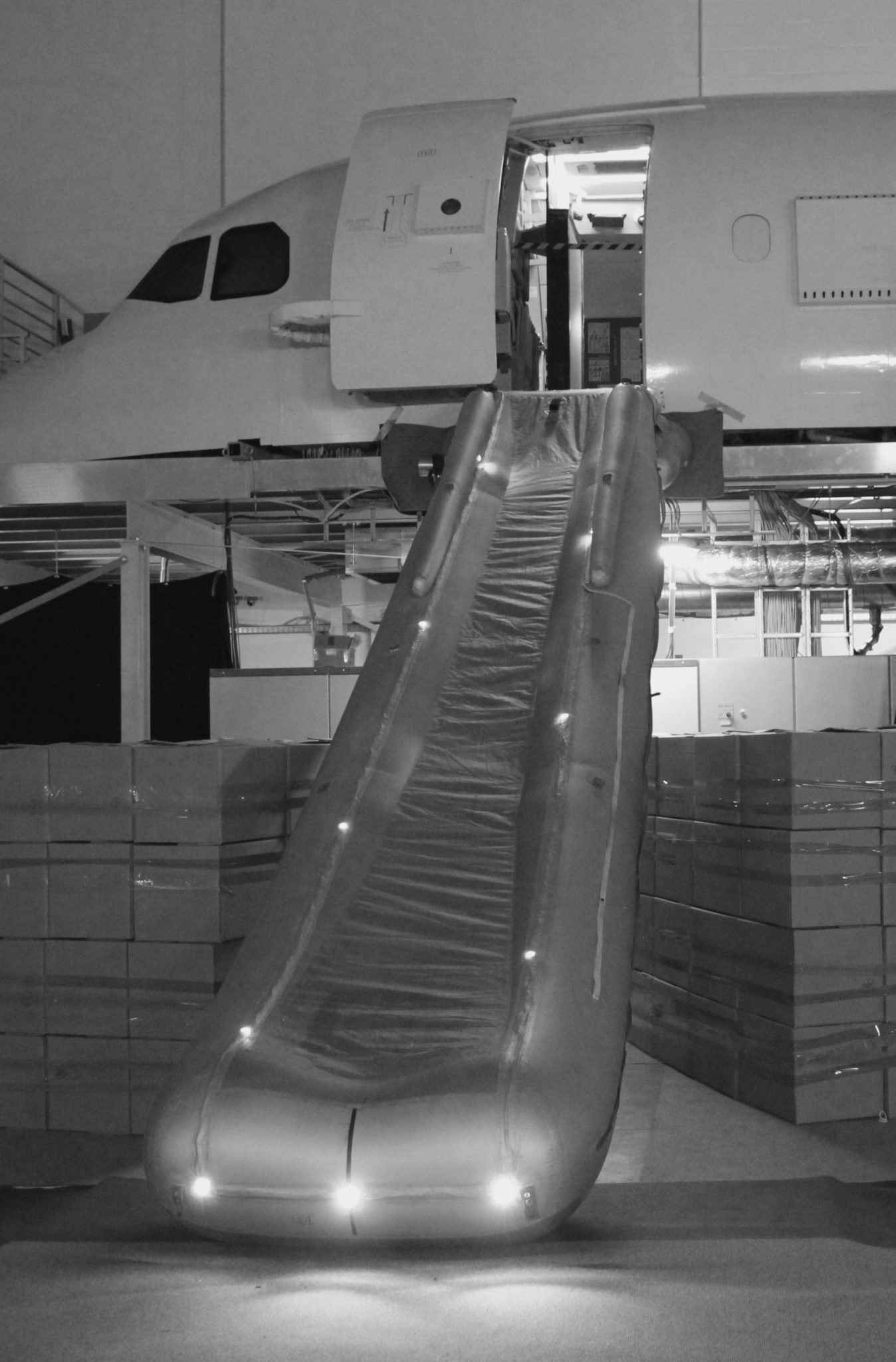 The shape of the EAM slide is different to the standard issue version. Image: Lufthansa Technik

The requirement to improve the beam strength led to a slight change of shape to the slide: it’s straighter and provides less bounce, so in essence passengers slide faster out of the aircraft. In addition, the illumination of the slide is improved, which creates a human factor advantage: passengers hesitate just a little bit less before jumping onto the slide.

“This is only a very, very small difference between one passenger to another,” Kurz notes, “but times 58, it’s a couple of seconds.” 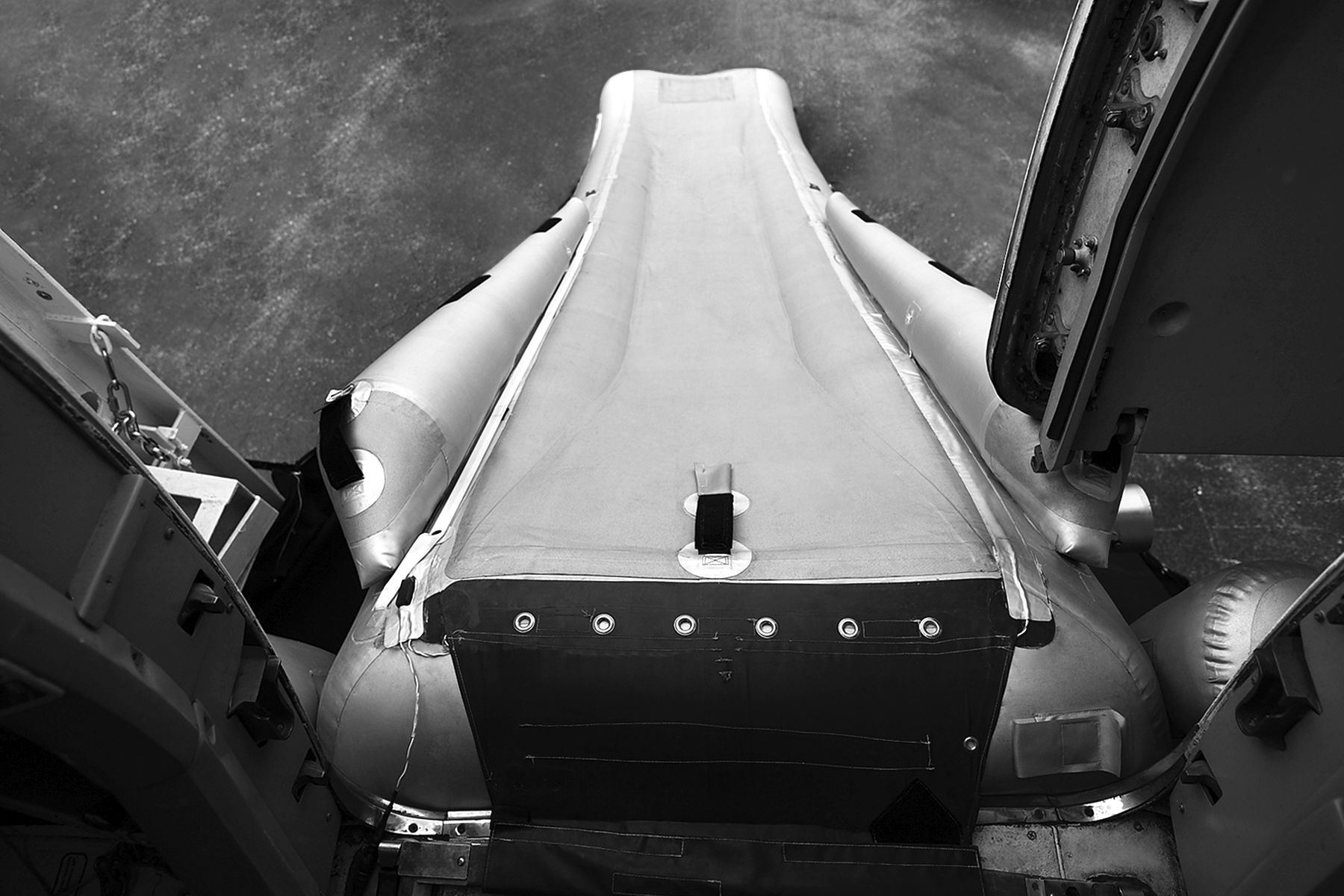 Designing out the human hesitation factor is an impressively thoughtful move. Image: EAM

Interestingly in these days where there is a perception of hands-off regulators content with computer simulations, European air safety regulator EASA required that the slide be certified with three-part real-world testing, in dark of night conditions, although Lufthansa Technik was not required to use a real aircraft, instead using a mockup at one of its bases.

“We conducted the tests at this facility in Berlin, and evacuated naïve test persons via the standard exit configuration, equipped with a standard single lane slide and then via our over-performing exit configuration with the EAM slide, and also some adaptions in the cabin at the exit area,” Kurz explains. “We were able to demonstrate that we can evacuate the same amount of passengers in a significantly less time than via the other exit.”

In part two, Kurz explains, “We had to do a partial evacuation test: we had to evacuate a far higher amount of passengers — of naïve test persons ‚ via our new exit configuration to get a passenger flow value.”

“This was then in the third step included in our total cabin evacuation analyses to demonstrate — via analysis by calculation — that the entire aircraft with 186 passenger seats can be evacuated, within 90 seconds with a sufficient time margin,” Kurz says.

It will be for advocates of live-test certification requirements above and beyond desk-based computer simulations to see that real-world testing has brought real-world benefits with this product.