It’s funny: some of the most impressive passenger experience novelties I see at airshows like Farnborough and Paris end up not being on the widebody airliners that hit the headlines. That was true again this year with the Bombardier CRJ-900, in Delta Air Lines colours and with Rockwell Collins seating, but featuring the airframer’s new Atmosphère branded cabin.

With the C Series now in the Airbus hangar as the A220, Bombardier can concentrate on the passenger experience it offers in its CRJ Series regional jets and Q Series turboprop aircraft, and if the improvements in Atmosphère are anything to go on, there is a serious amount of promise here.

We hear a lot about bigger bins in new aircraft, but Bombardier here has done some incredibly clever engineering with sizing and especially the hinge and the swivel, which create extra inches where it counts. In the premium cabin (first class in the US, business class in the rest of the world) Bombardier really can fit a road warrior-sized carryon, wheels-in, and they broke out the labelmaker to show it. 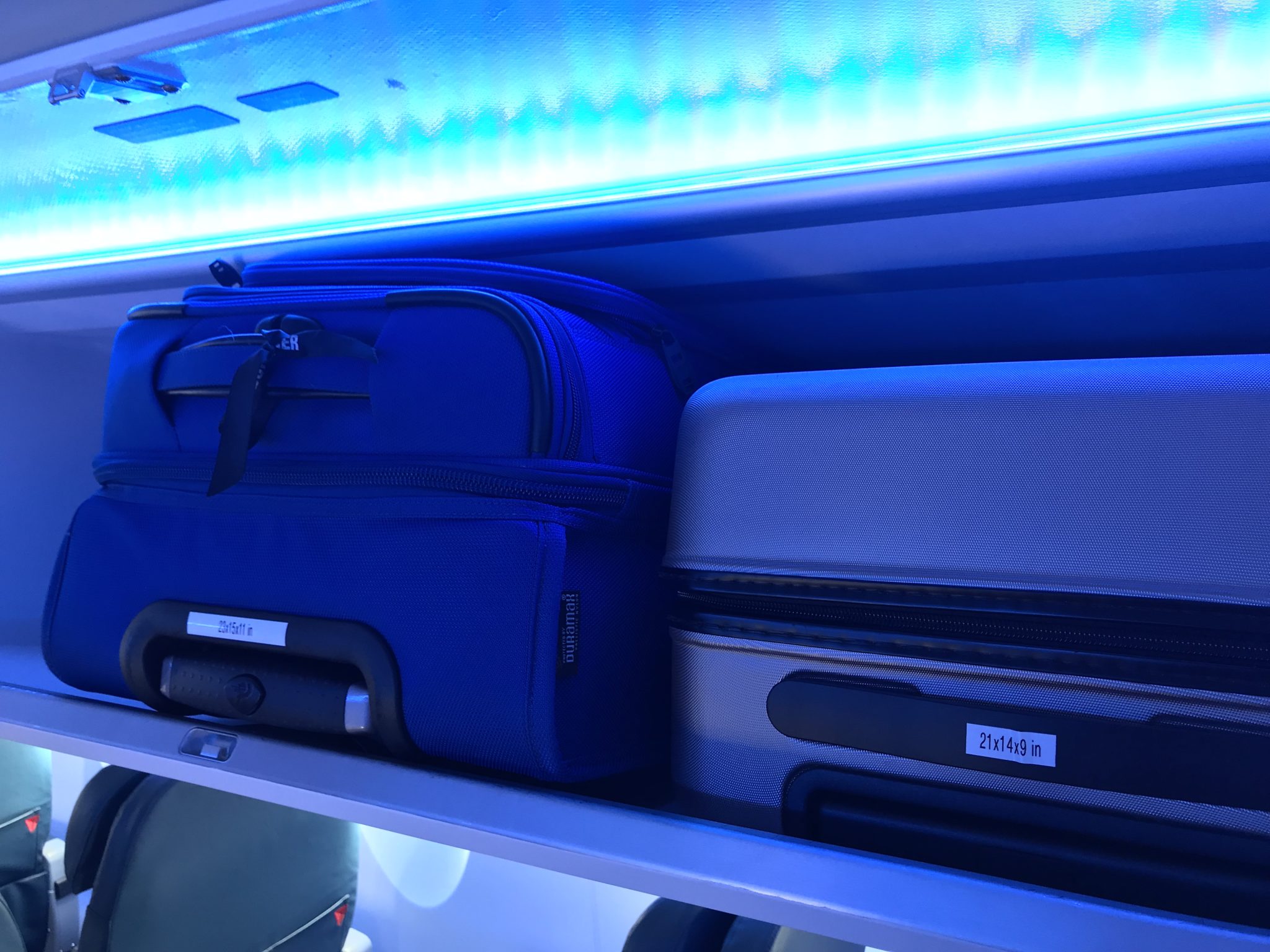 Bombardier brought out its labelmaker to highlight the size of example bags. Image: John Walton

They’ve done it by cutting the bins on the single-seat side of the cabin and moving the aisle across to that side, which means that proper luggage can fit wheels-in.

My only regret living near a European airport that sees elderly CRJs all over the tarmac like an unfortunate rash is that the Eurobusiness product means that I won’t be seeing the 1-2 layout and its massive bins locally. 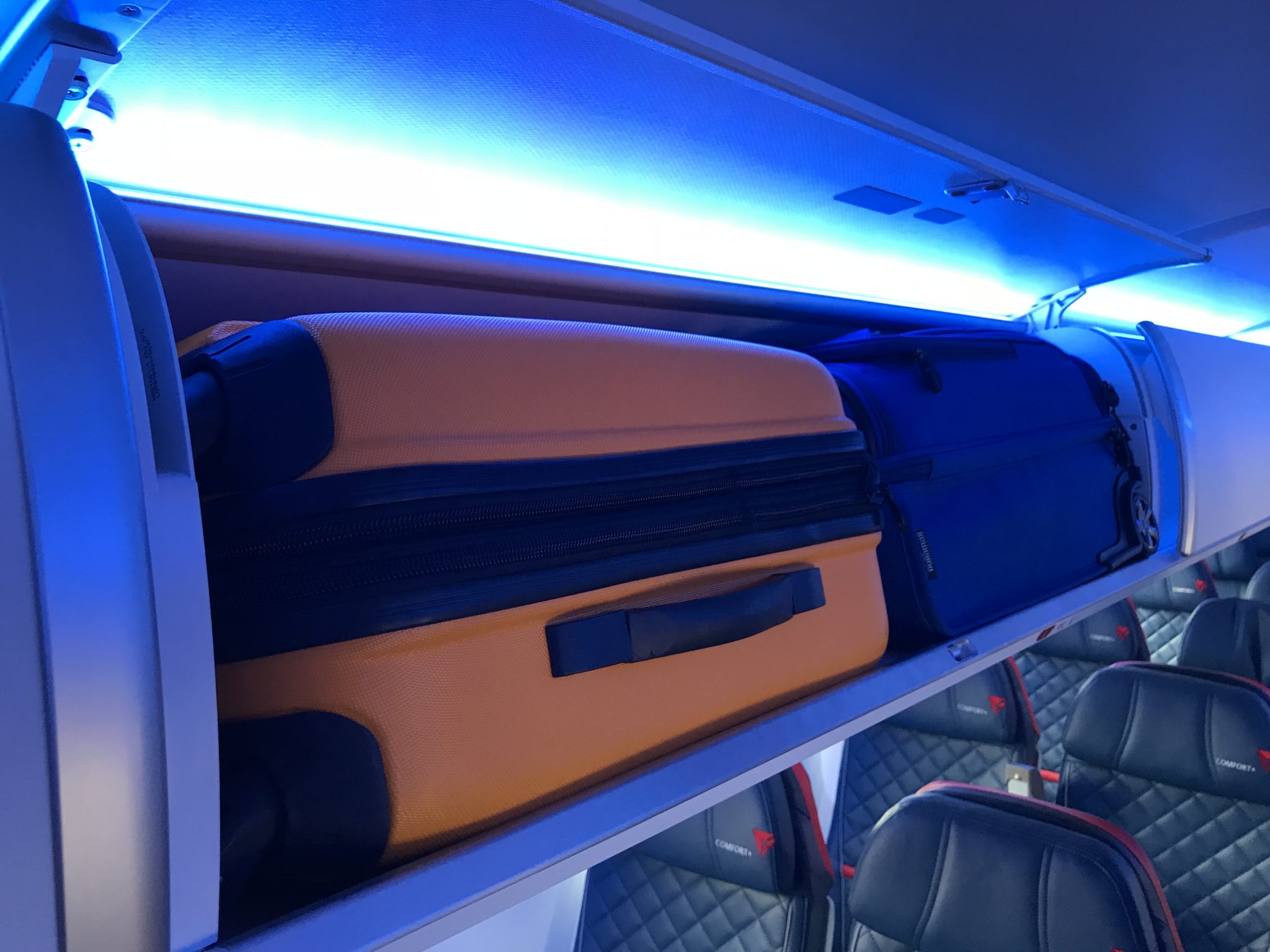 Nevertheless, even in the 2-2 economy-slash-Eurobusiness configuration Bombardier has done some good work. Those same larger bags can fit side-on in the new bins, which is great news for everyone whose usual luggage doesn’t quite fit in the overheads today.

Other improvements include a streamlined look and feel that really update the passenger experience, as well as new layout options at the front of the aircraft.

The large entry area option includes stowage for five service trolleys, together with increased surface workspace. The brushed aluminium effect fails to impress, however, and doesn’t feel like it has been designed to move beyond what could charitably be called “industrial chic”. 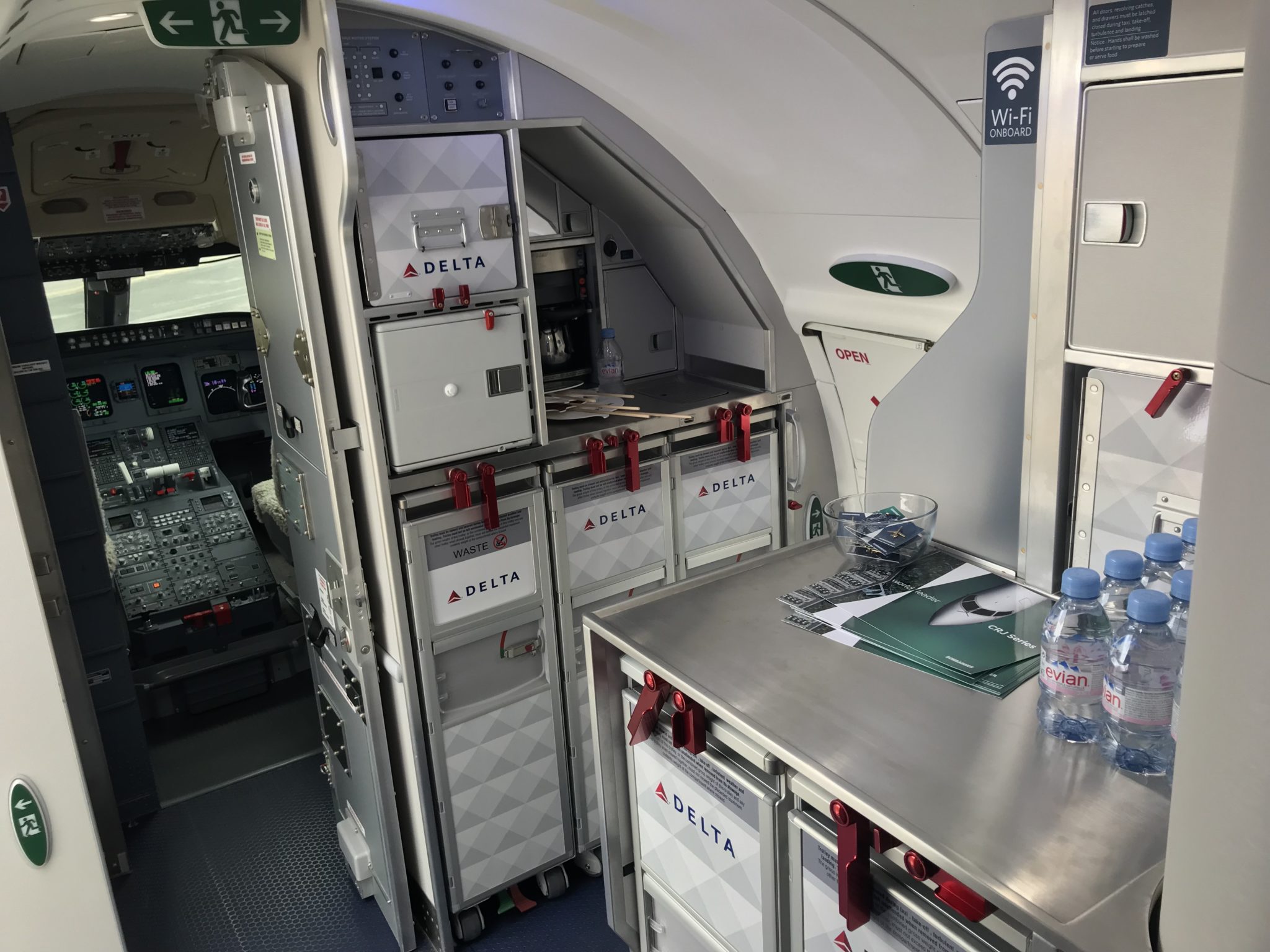 Yes, there’s space, but it’s not exactly a delight to look at. Image: John Walton

Bombardier has neatly tucked away the weather curtain into a cupboard, though, which not only improves the first impression when boarding the aircraft but also means fewer puddles inside the cabin. 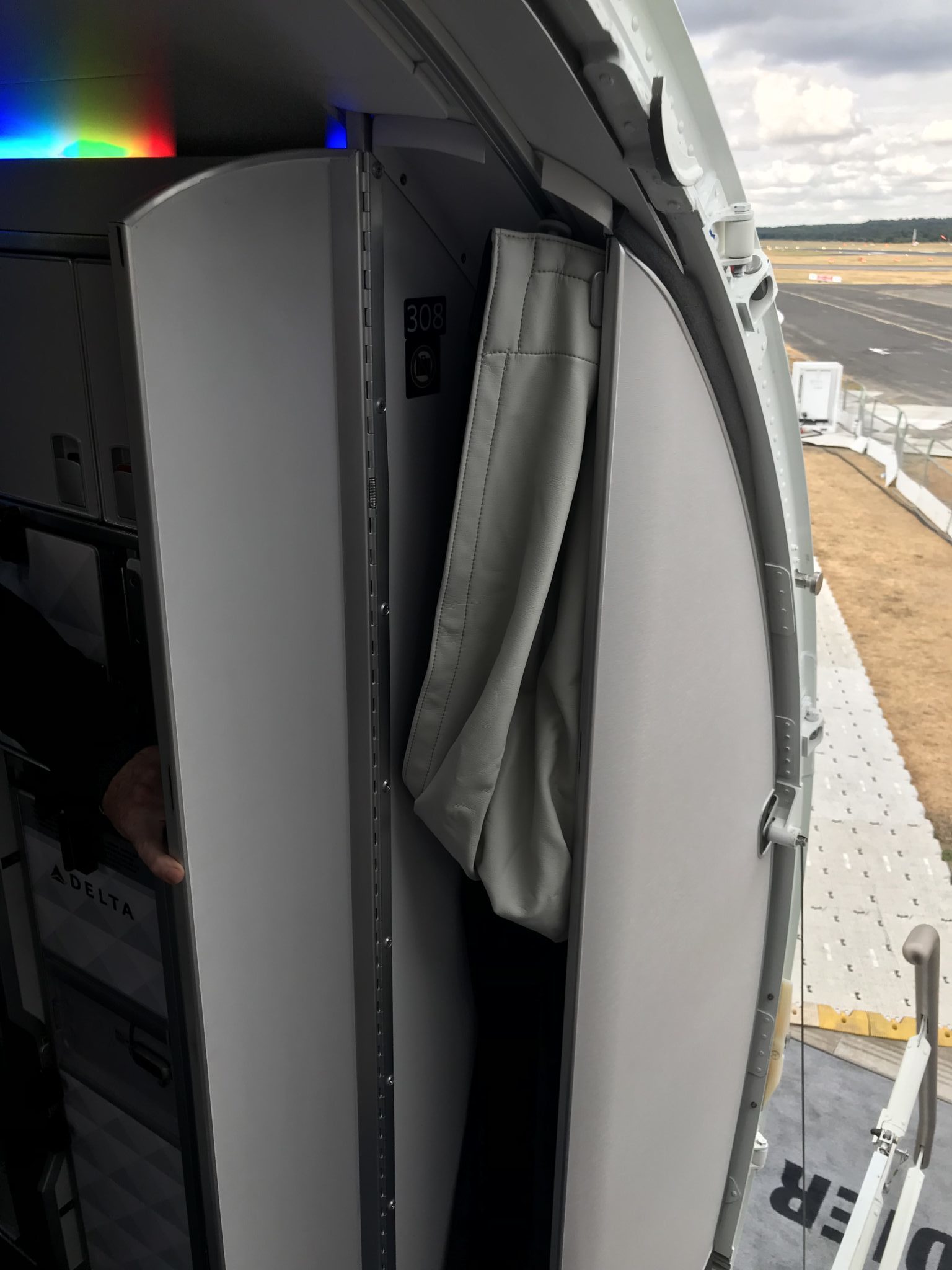 A closet for the weather curtain smartens up the entryway and keeps the floor cleaner too. Image: John Walton

Bombardier also offers a large lavatory, which — to its discredit — Delta does not seem to have chosen to take in its larger accessible version to accommodate passengers with reduced mobility, Bombardier tells me.

The CRJ lav on show is by no means a Boeing 737 MAX mini-loo, but the PRM lavatory extends just a few inches deeper into the cabin than the non-PRM version, with a Bombardier representative demonstrating the relative difference with approximately a handspan.

And it’s a shame that the seats on show didn’t reflect the latest and greatest use of cabin space. The Delta seats up front, which Bombardier says are from the former B/E Aerospace, now Rockwell Collins, are the standard diamond-waffle effect, and look fine in the padding and materials stakes but are remarkably clunky compared with the latest generation.

It strikes me that a set of modern seats up front could release enough space to fit a PRM lavatory with ease and with no material negative impact on the premium passenger experience.

Enormous underseat boxes for inflight power are also a bit of a letdown: we’ve seen so many smaller options from so many vendors recently that these stick out like a sore thumb. 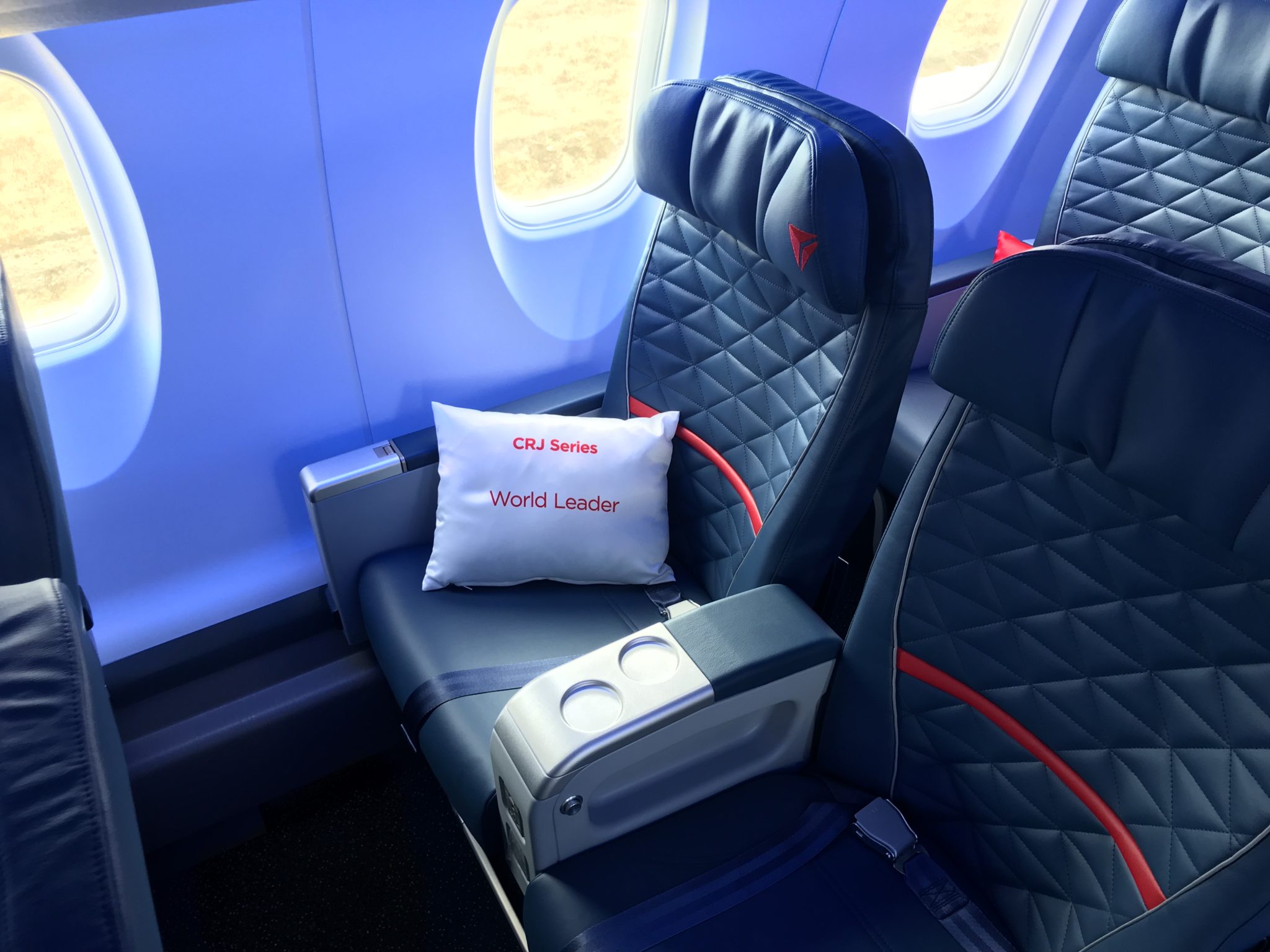 Modern seats carve out more space for passengers than these do. Image: John Walton