Dragon Aviation Group founder Diana Chou might also be considered a founder of Chinese business aviation. She looks back on her career after merging L’Voyage with ASA Group, establishing Allavita, a new bizav lifestyle brand.

Diana Chou is a powerhouse in Asian business aviation, but hers is not the story of a woman succeeding in a male-dominated industry, but the epic tale of a pioneering entrepreneur.

In a subsequent interview she told me: “I was actually quite nervous because I didn’t know what questions to expect.” So how does this modest personality command such respect? “I put my heart into everything I do – perhaps because of that my passion comes through?”

Chou’s aviation influence is from her father. He had a hand in founding Dragonair, but she says he was never an ‘airline person’. “He’s an entrepreneur and patriot. He invested in Dragonair on that basis. It was the early 1980s and he thought it would be great to break Cathay’s regional monopoly. He saw it as an investment but didn’t know what he was getting into. It almost bankrupted us!”

Diana Chou’s subsequent move into bizav was through a series of coincidences. “My family was traditionally in the apparel business and my brother was working in the industry in the US. He spent a lot of time travelling, chartering business aircraft for convenience.

“His business partner was neighbours with Pierre Beaudoin, Bombardier’s Chairman of the Board. Another of his partners was the Ojjeh family, which owns TAG Aviation. Bombardier and TAG were working together, and Bombardier was looking for an agent to help break into the China and Hong Kong market; they asked my brother’s partner if we’d be interested.

“Our family is well known in the region and they thought we’d be able to open doors for them. My brother, his partner and Mansour Ojjeh, signed an exclusivity agreement with Bombardier covering Hong Kong, Macau and China, but weren’t sure what to do with it … so they asked me.

“I was working for Estée Lauder. Business aviation was sexier than selling cosmetics and I never looked back. I’d had no aviation training, I just threw myself in and learned by mistakes. I like a challenge!”

The year was 1998/99 and it took three weeks just to get permission for a flight into China on a foreign-registered bizjet. “Also, Chinese tycoons and entrepreneurs had only existed since the 1970s, so few people even knew about business flying,” she says.

“It took two years to sell my first plane. I went around knocking on doors, making cold calls, meeting people, explaining the benefits and selling the concept. Then I realised what would convince them to buy – everybody needs time, and nothing buys time, except business aviation.”

Chou subsequently sold helicopters, jet charters and aircraft management. She says the secret to her success is simple. “I’m a salesperson! I put myself in the customer’s shoes and find a way to satisfy their needs. An unhappy customer never comes back, but returning customers also recommend their friends – that’s much easier than finding new clients.”

“For the future, I think If we do Allavita well, it’ll be a really interesting lifestyle platform, although it may be my last business venture. I also want to give something back, coaching young entrepreneurs. If I could give my 1990s’ self advice, I’d tell me not to be so impulsive, always think before making a move. I stumbled many times and I’d like to help others learn from my mistakes.” 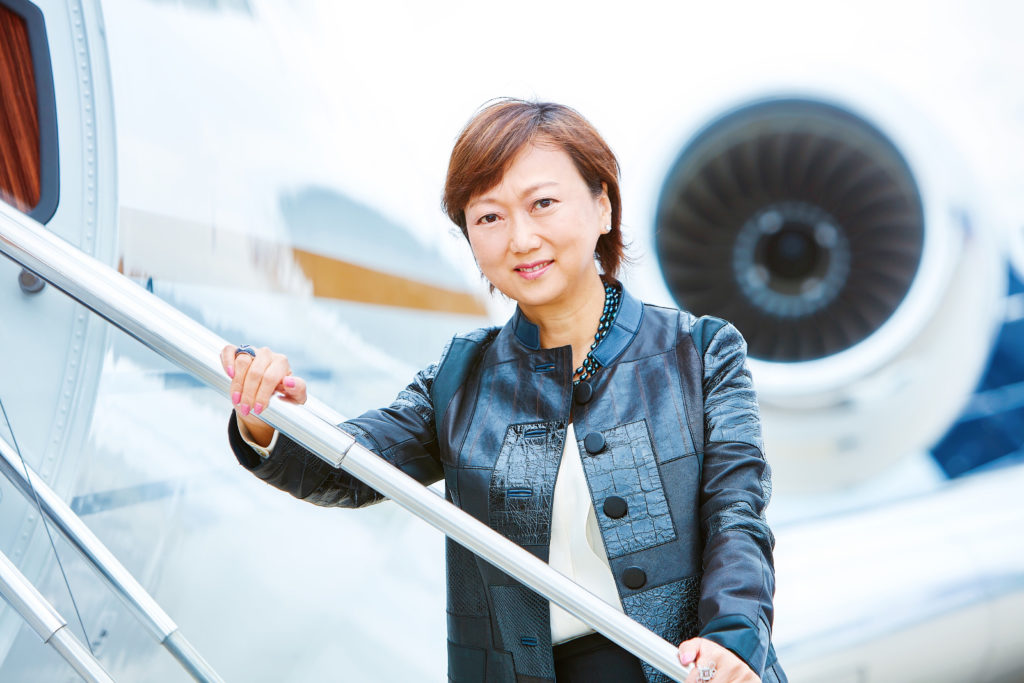 Chou wants to give back, and help others learn from her mistakes. Image: Paul Cordwell Photography