It was the year 2013. Lufthansa Captain Andreas Ritter was flying from Rio to Frankfurt on an Airbus A340-300 that was equipped with the carrier’s FlyNet-branded Ku-band inflight connectivity system.

“Just south near the equator, flying northeast-bound, we hit a wall of thunderstorms I had never seen before. We saw it on the weather radar,” he recalls for Runway Girl Network.

At Ritter’s disposal was a test laptop capable of accessing real-time weather applications, including a WxFUSION product called Cb-TRAM for short-term thunderstorm prediction. “I could visualize the live satellite picture while my two first officers who were doing the flying in the first hours [of the flight] were only using the weather radar. The two of them tried to find a hole to slip through by the radar, but the satellite picture has a bird’s-eye view and can see what’s behind the thunderstorm.”

Ritter quickly realized that if the crew had relied on the Cb-TRAM information sooner, it could have steered the aircraft through gaps identified by the technology, thereby avoiding a 300 NM deviation and saving fuel. 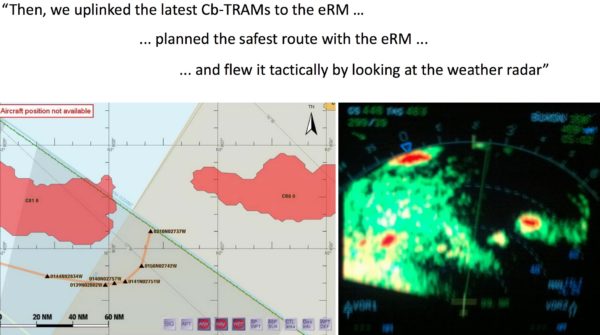 The Lufthansa crew flew tactically after uplinking the Cb-TRAM data. Image: Captain Ritter as presented by the German Aerospace Center.

So impressed was Ritter by the Cb-TRAM application that he conducted deep analysis of what transpired on the flight and used the findings to “make the business case for investing in that technology”.

Countless white papers have been written, and speeches delivered, about how broadband connectivity pipes aboard aircraft can drive operational benefits for airlines. Lufthansa, and indeed Captain Ritter, needed no convincing on the merits of connected EFBs. In 2010, three years before Ritter’s aforementioned experience near the Inter Tropical Convergence Zone, he told your author and other journalists at a briefing in Germany that Lufthansa envisaged using real-time EFB applications to avoid bad weather and recalculate flight plans. At that time, Ritter believed parts of Lufthansa’s vision would become reality within a few short months. “I was too optimistic; it took much longer. It was much more complex than we thought,” he now admits.

That’s not to say that Lufthansa didn’t try to make it happen. Shortly after the media briefing, the carrier started more serious research and testing. In 2013, Ritter presented at the EFB User Forum about his experience, showing “that a big safety gain could be reached” by using real-time weather from WxFUSION in-flight. After that, Lufthansa invested in Microsoft Surface Pro 3 tablets for its pilots for use as Class 2 EFBs. “We purchased 4,500 of them in late 2014, rolled them out in early 2015, and all Lufthansa airline pilots have them,” says Ritter. All pilots within the wider Lufthansa Group member airlines carry EFBs. Ritter says 93% of them use Windows-based EFBs, mostly the Surface Pro, though 7% use iPads.

By 2015, Lufthansa pilots had the physical hardware needed to begin executing on the carrier’s vision. But Germany’s civil aviation authority, the Luftfahrt-Bundesamt (LBA) would not approve of Lufthansa’s use of weather data that had not been certified by German meteorological office Deutscher Wetterdienst (DWD). “They said, ‘we don’t know how to certify data created in the US. When we switched off the microphones, they also said, ‘why should we?’ Because it’s not their data. This went back and forth a lot.”

The political block has only recently been lifted, reveals Ritter. Newly released guidance will allow foreign data to be used for inflight applications.

“However, through all these years, 2014 until now, we have performed large-scale trials on one fleet, all 747 aircraft. We have been using data about clouds and thunderstorms for three years. Furthermore, we are doing with DWD research on volcanic ash predictions and identification,” he says. The carrier is convinced that if there is a volcanic eruption, the impact on operations will be less severe than in 2010 when Iceland’s Eyjafjallajökull began to erupt. Lufthansa is also testing turbulence avoidance applications.

To be clear, the pilots involved in these tests are not using the FlyNet service for passengers. “We distinguish between Crew Broadband and FlyNet; we are not using FlyNet. We are using another wifi network. Our EFB devices are not enabled for private use in the EFB configuration,” explains Ritter. “We are not using the Internet; we are tunneling from the onboard wifi directly to the Lufthansa Intranet.”

So to summarize, since we have spoken that time, 7.5 years ago, we have been busy. We have not stopped researching, developing and testing. [We have] probably performed more than 100,000 flights where we tested, because we did not have operational approval to use it. It is finally now arriving. I thought it would be a matter of a few months, but I underestimated it.

We believe safety is very important and this is why my managers and I have put money into this and we believe we have one of the best products in the industry. For example, while other airlines put a weather app on the EFB, we are integrating the weather data in the EFB. We have a charting app and put a weather layer on the charting app, so pilots do not have to switch for different apps [one for navigation and another for weather] so it’s all in one place. [And we’ve] integrated a profile application to circumnavigate thunderstorms vertically.

The dream I have is that we switch on the seatbelt sign not after the turbulence hits, but just before so the chance of injuring flight attendants is minimized. And the dream I have is that we can descend or climb in the most efficient way … [At present] the crew descends or climbs to avoid turbulence and asks ATC if they know of a level of less turbulence and try to find it. All of these aircraft are flying other trajectories, but there are no visual representations of turbulence in other areas, so you could climb or descend to another level but you’re doing it completely blind because you don’t know what’s happening in the next minute. In our application, you can circumvent it laterally or vertically.

Using turbulence avoidance technology would improve safety and mean more efficient fuel burn, he notes, “and that’s why we invest in this”. But obviously, “you need a broadband connection which is working” and that is not always the case.

Panasonic Avionics’ Ku-band network supports Lufthansa’s FlyNet system on 100% of the long-haul fleet, and the carrier is rolling out Inmarsat Global Xpress on its short-haul aircraft.

“Over China, we are not allowed to use our FlyNet system. It is switched off over China,” notes Ritter. The Panasonic Ku system is switched off below 10,000ft whereas GX on short-haul aircraft “is switched on immediately after takeoff but it takes a few minutes so 7,000ft or 8,000ft is when it starts to work. These systems are not always as reliable as pilots or passengers want them to be. It’s not always available.”

Even so, Ritter and his colleagues want to have the ability to access real-time EFB applications when connectivity is available. “I think it will make flying for our passengers more comfortable, and other inflight weather technology and other use cases [will emerge],” he says. “For example the update of winds, we have done this via ACARS but now with broadband, we can have a lot more data and calculation power on the EFB so we can make flying more efficient and also introduce new functions such as electronic tech log inflight defect reporting, and this is just the beginning.” Ultimately, he envisages real-time data streaming of parameters to the ground (i.e, streaming black box data, as first discussed with vigor after the Air France flight 447 crash).

Safety services are presently transmitted on secure L-band satellite pipes. Does Captain Ritter ever see a day when broadband connectivity pipes will be used for safety; are they reliable enough? “I believe aviation should always have a secure and reliable pipe for safety services, but it doesn’t need to be dedicated,” he suggests. Rather, Ritter believes the reliability and security needed for operational enhancements could be achieved by combing usage of networks, be they Ka or Ku, Inmarsat or Iridium.

Ritter’s original presentation at the end of 2010 can be viewed below. It’s somewhat staggering to consider that all these years later, Lufthansa is only now poised to roll out the functionality commercially (it’s waiting for the formal LBA guidance to arrive any day now).