As more Iridium NEXT satellites are launched into low earth orbit to build out the full constellation – the latest batch of 10 satellites was successfully deposited on 22 December via a SpaceX Falcon 9 rocket – flight tracking tests are already underway at SITAONAIR, which is using data from the current in-orbit satellites’ Aireon ADS-B payload. And thus far, SITAONAIR is excited about what it is seeing.

“With regards to Aireon, we have been doing more tests – merging data with our other data sources and we do that as Iridium NEXT is being deployed. What we are seeing so far, even though the constellation is not yet completed, has been very promising. It has even exceeded our expectations in both coverage and accuracy,” SITAONAIR VP of strategy Dominique El Bez tells Runway Girl network.

A joint venture between Iridium Communications and various air navigation service providers, Aireon is creating a platform capable of tracking ADS-B-equipped aircraft around the globe in real-time. Under a partnership announced last year, Aireon data is being delivered to SITAONAIR via FlightAware, which provides a secure streaming data feed of flight positions and flight status data via a combination of air traffic control data, ground-based ADS-B, and aircraft datalink information. This data is then being ingested into SITAONAIR’s own AIRCOM FlightTracker-branded product, which combines multiple sources of flight tracking data to maximize results. 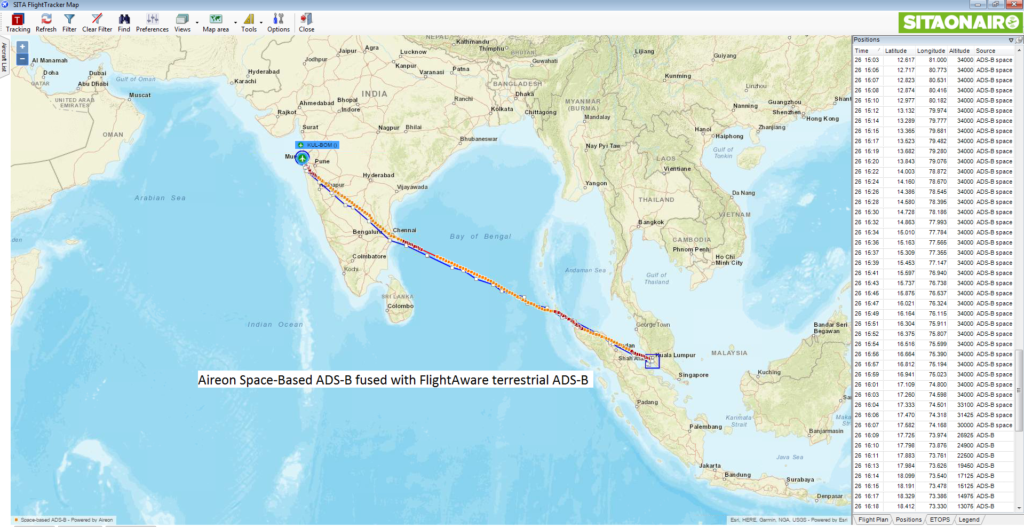 El Bez says the Aireon space-based ADS-B data, in particular, is filling out gaps in flight tracking coverage. SITAONAIR has shared its learnings thus far with AIRCOM FlightTracker customers so that they can see “how this could be used in different parts of the world where existing coverage is not sufficient” such as polar routes and for certain oceanic coverage gaps.

Indeed, prior to the very latest satellite launch, Aireon was already receiving approximately 6 billion position reports per month from 30 satellites with the space-based ADS-B payload. “Among the surprises discovered during the ongoing testing and validation process, is the payload coverage area, or ‘footprint’, being substantially larger than initially expected. This results in greater coverage areas per payload and establishes increased redundancy across the system,” says Aireon. A total 66 Iridium NEXT satellites with the payload will be needed to provide global coverage.

Aireon is also “offering a much more frequent update than what you could have” via ACARS with the ADS-C tracking mode, says SITAONAIR’s El Bez.

The frequency of the update easily meets ICAO’s Global Aeronautical Distress Safety System (GADSS) mandate, which requires airlines to be capable of providing location information at least once every 15 minutes from 8 November 2018.

But Aireon’s ability to provide data every minute – and indeed faster than that – means that Aireon is “future proofed” to meet the 2021 GADSS requirement for minute-by-minute distress tracking, notes El Bez. 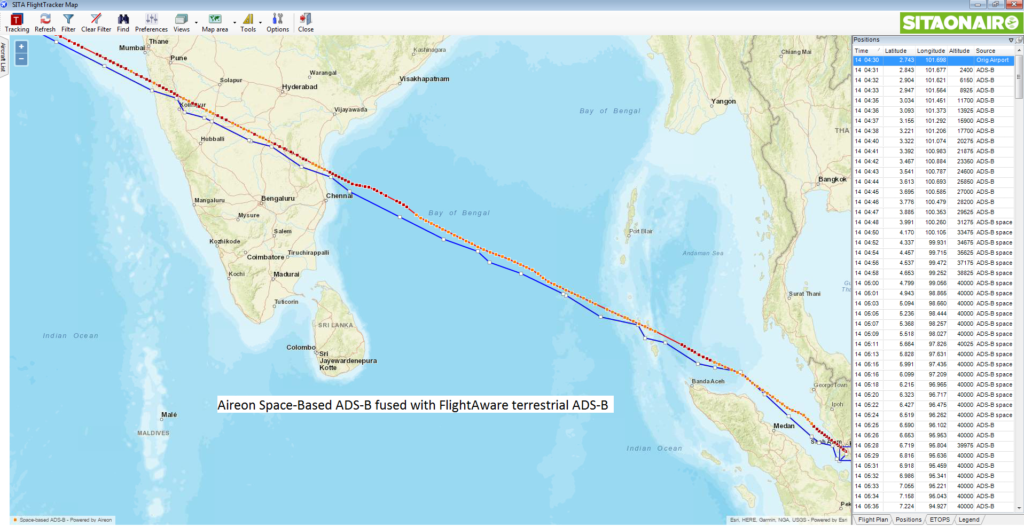 It’s clear that Aireon will tick the flight tracking box for numerous airlines, including those which operate aircraft without any satcom solutions, as they’ll see Aireon “as the most cost effective way to meet GADSS”, says El Bez.

To Iridium, what Aireon is rolling out is nothing short of “game-changing”, adds Iridium director, product management Brian Pemberton.

Ultimately, however, SITAONAIR foresees a mix of tracking solutions being deployed by airlines, and SITAONAIR is well-positioned to facilitate the various options.

The company has long supported aircraft cockpit communications and safety services via VHF and Inmarsat L-band satellites. And it was recently named a distributor of Inmarsat’s new IP-based SwiftBroadband-Safety service.

SITAONAIR is also “providing Iridium services for safety and naturally we’re looking at [Iridium] Certus” – the new aero service which will be offered over the Iridium NEXT constellation – as a “next generation” of safety service and IP service, says El Bez.

Since SITAONAIR is already an Iridium value added reseller, its strategy “is to continue offering choices to our customers”, he adds.