Some companies secure additional financing dollars but take a share price hit as an apparent result of feeding the need. Others work to get their house in order with the hopes of attracting more capital. For subsystems provider Smiths Interconnect, its focus is on forging strategic investment partnerships in inflight connectivity.

Already a player in both aircraft antennas (it owns the business formerly known as Tecom) and aircraft cables and connectors, Smiths Interconnect has “some very good technology and we are also what I consider an investing partner. We are a large company and should an application arise that requires modification to the product or investment, we are willing to do that,” company VP business development & sales Ralph DeMarco tells Runway Girl Network.

Smiths Interconnect, which also serves the defense, aerospace, space, rail, and other markets, was present at both the recent APEX EXPO and NBAA showcase. The firm is trying to meet as many customers as it can right now “to have technology seeking partnerships, investment partnerships where we can work together as a team. I am not competing with them because they are the integrator; I am simply the subsystems provider to their service,” says DeMarco.

One area of interest for Smiths Interconnect is in offering a complete subsystem solution in inflight connectivity. “Sometimes the radome is part of our subsystem, sometimes it’s not. We would like to get to a place where we can offer a complete turnkey subsystem solution, which includes the antenna, high powered transceiver, the antenna control unit, the radome, the cables and connectors,” reveals Demarco. The firm also wants to offer aftermarket services to support its units in the field.

Smiths Interconnect doesn’t favor a particular frequency in inflight connectivity. “We want to be frequency agnostic actually. Because again every integrator has a different need and they want to connect to a different satellite system. We might not have the product for every range today but we believe we have the technical capability to operate in all of them. We also do millimeter wave, which is super high frequency. The technology, albeit not usable right now, I think as the bandwidth starts to go up people will start to use it.

“That’s the advantage of playing in the military, having that technology that can possibly come to the space.”

In 2008, Tecom teamed up with Qest to develop KuStream 1000, a traditional Ku-band antenna which has supported the Global Eagle Ku rollouts on Southwest, Norwegian and others (now unified under the Smiths Interconnect brand, Tecom also serves business aviation with a tail-mount antenna). But RGN understands that some work with Panasonic Avionics is forthcoming now that Panasonic is rolling out connectivity on Southwest. Is Smiths Interconnect able to discuss its current work?

Well we talk to everybody first of all, and we are in discussions with Panasonic because we believe they have secured a contract with Southwest to support a good chunk of that fleet. Our hardware is already fielded on those aircraft, so in turn we need to work with Panasonic to support that.

Would the KuStream 1000 hardware then start talking to Panasonic’s network? “If their network is installed on those airplanes, absolutely. We would have to modify our equipment to accommodate them,” says DeMarco.

And would the onus be on Panasonic to secure STC if it were to use the KuStream 1000 antenna fitted to aircraft? “That is one of a number of ways it could work,” he says. 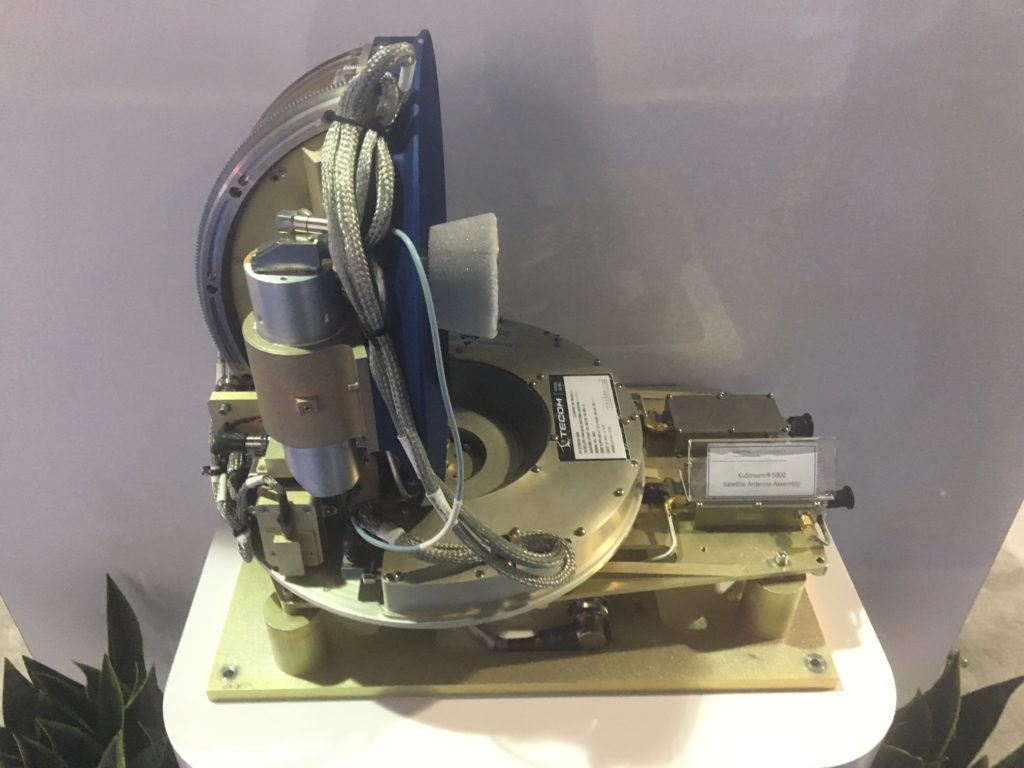 In addition to the KuStream 1000 antenna for commercial aircraft, pictured at the very top, Smiths Interconnect offers this tail-mount antenna for the business aviation market. Image: Mary Kirby

Mechanically steered satellite antennas continue to dominate in the commercial sector. As such, there may still be opportunities to grow the KuStream 1000 business. “We are talking to a lot of customers all over the world. We are also working with customers in Asia right now,” says DeMarco, pointing to China, in particular. “So, we have a number of partners which we believe will lead to future flight tests and trials.”

But DeMarco believes the industry will eventually move to electronically steered solutions. To wit, last year Tecom and Kymeta announced a partnership to bring new satellite antenna technology to market.

“We are advancing our technologies so that when a specific application arises we are ready for the opportunity. We need to work with our partners. It’s not just something where we will develop in a box and say, ‘here it is.’ It’s not a commercial-off-the-shelf idea. We are a technology partner with larger integrators so that we can provide a product that matches their needs as well. Whether that’s low profile, whether that is electronically steered arrays, whether that is size, weight and power reduced electronics,” says DeMarco.

There is a push and pull between Smiths Interconnect and its partners. “It’s how the partners are steering it but it’s also our ideas on size, weight and power emphasis, and that is what we are working on right now. And that is important as you know on an aircraft.”

With prowess in the military sector, there is crossover to commercial, confirms DeMarco. “We leverage technology in both ways. Surprisingly there are times where the commercial industry actually drives the military. Years ago, that was not the case.”

The firm also engages in direct conversations with airlines on how to support them. “We do talk to airlines. We try to get close to the customer. Try to make sure we understand exactly what everybody at every level is looking for so we could design a better antenna subsystem solution.”

Smiths Interconnect’s goals within the #PaxEx sector are pretty clear, with DeMarco reiterating to RGN, “Well again, as I said, we prefer to sell subsystems to integrators, albeit commercial or military applications. We do both today and we do them at different levels, some are complete subsystems, some are a modified version of a complete subsystem. And everybody has a different need and every airplane is different. It’s customized solutions basically.”

During the APEX EXPO, did the company see any kind of M&A activity it would be interested in? Anybody that it would want to snatch up to add to its growing portfolio? “We are always thinking. We are always looking. Obviously that is all I can say.”

As for industry consolidation, says DeMarco, “Oh sure, that is a possibility. I am sure things are changing.”

SIA’s new A380 business class surprises but for the right reasons?