Although the Air Carrier Access Act of 1986 (ACAA, 14 CFR Part 382) prohibits commercial airlines from discriminating against people with disabilities and actually requires carriers to provide specific, “individual safety briefings” for passengers with a wide range of disabilities when they board, according to ADAPTS principal and inventor Robin Wearley, something has clearly been lost in translation over the years.

“I currently have a survey posted on the ADAPTS.org website where we specifically ask wheelchair travelers baseline questions about what they know about emergency evacuations and what their assumptions are around that,” says Wearley. “It is enlightening to me that two thirds of them have never had a pre-flight safety briefing from the crew where they explain to [the passenger] how best to help them in an evacuation. Less than 10% say they have always been briefed and one third say ‘sometimes.’ That’s appalling to me.” 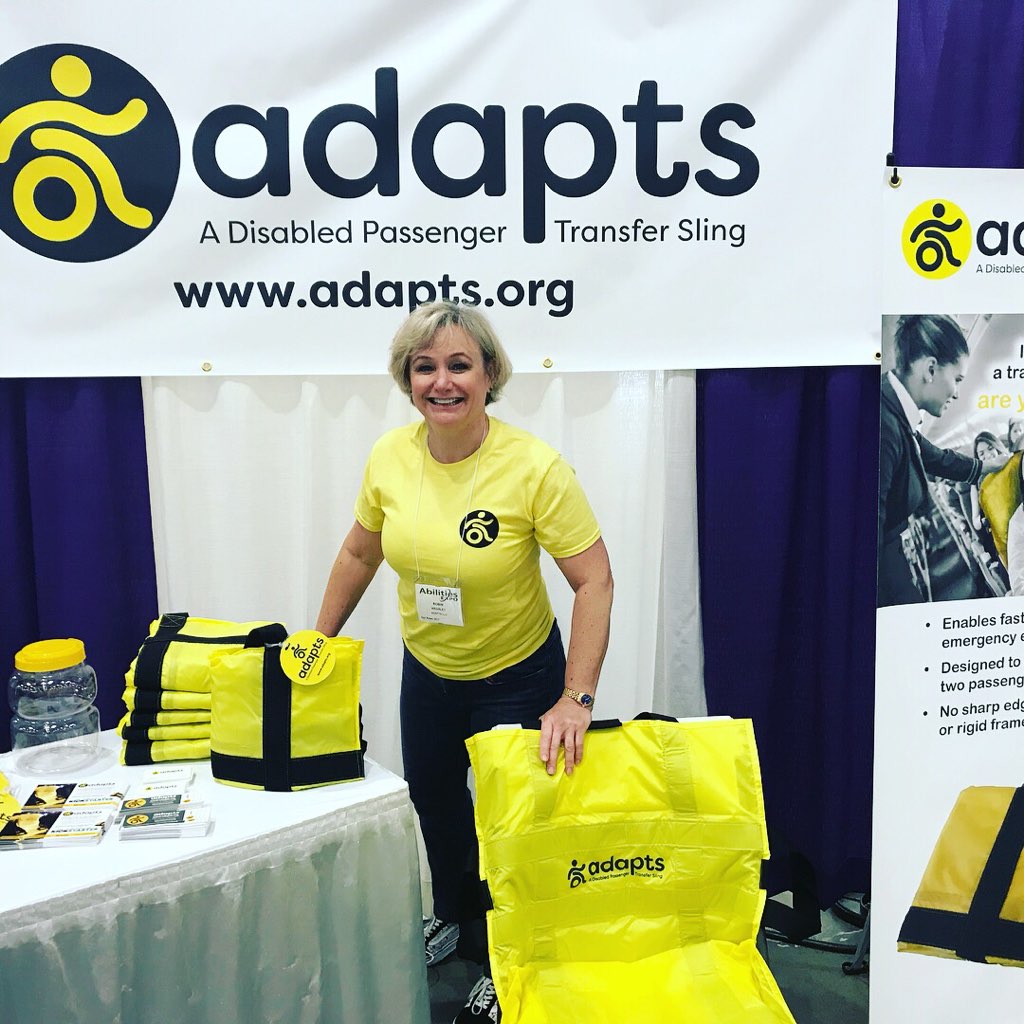 Robin Wearley, the inventor and principal, at ADAPTS. Image: ADAPTS

Determined to do something to help make not just flying, but traveling in general, safer for wheelchair users the world over, Wearley channeled her unique skillset – a former flight attendant, Wearley also worked for 15 years as a cardiovascular surgery physician assistant and later as the manager of a team of medical science liaisons in the pharmaceutical industry – and invented ADAPTS. An acronym for A Disabled Passenger Transfer Sling, ADAPTS is designed for use by passengers with mobility impairment who wouldn’t be able to evacuate an airplane, building, or arena in an emergency without their wheelchair.

“I was a flight attendant back in the late ’70s and early ’80s and at that time, we used what is called ‘the blanket method’, whereby we asked wheelchair passengers who were boarded with an aisle wheelchair (basically a dolly with a seat) to sit on the blanket so that in the event of an emergency we could grab the edges and run with them. Well, fast forward to today where the blankets are now the size of napkins and about as flimsy as tissue paper and it dawned on me that there is still no good device or plan for … getting wheelchair passengers out as fast as any other passenger in an emergency. ADAPTS is the same concept but with sturdy grips and made of life vest-like fabric.”

“With the help of fellow passengers, ADAPTS gets wheelchair passengers to the exits and to the first responders without having to wait on the crew to come back to get them [and] the way ADAPTS works is beautiful in its simplicity,” suggests Wearley. “Simply unfold it on a seat, attach it with elastic at the top of the seat or wheelchair, and sit on it. It has six handles so that anywhere from two to six people can each take a handle and it is designed to be used so rescuers grab handles at the head and behind the knees to walk single file down the aisle with the passenger in the sling between them. Once outside the aircraft … additional rescuers can grab the other four handles.” 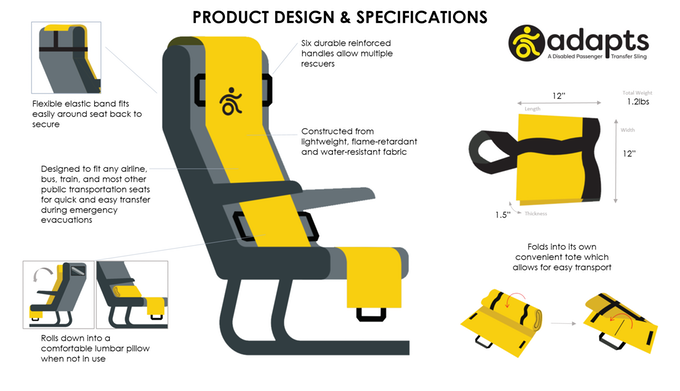 Designed with today’s increasingly narrow airplane aisles in mind, Wearley adds that ADAPTS also accommodates any form of mobility disability by safely cradling the passenger “as if they were in a hammock” as the rescuers carry them to safety

“As a former flight attendant, I also knew [ADAPTS] had to be easy to use and require no assembly when time is of the essence. It couldn’t have any sharp parts that might poke a hole in the inflatable slide and needed to be lightweight for packing, flame and water-resistant, and it [also] had to be affordable,” says Wearley. 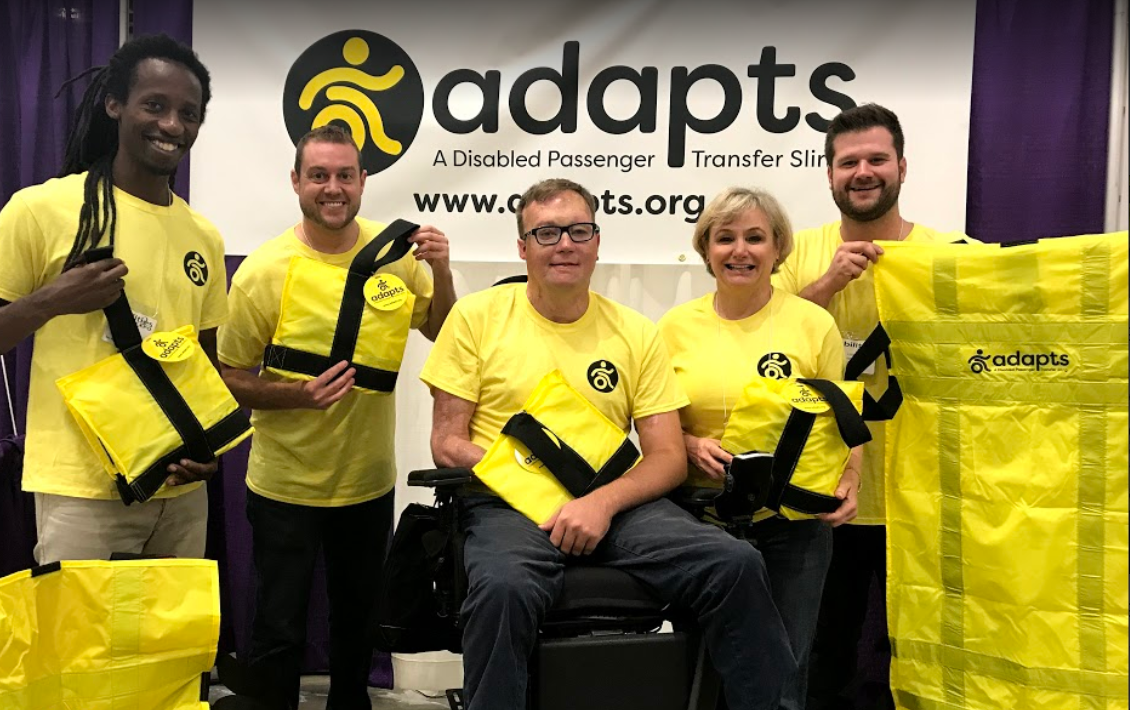 Currently completing the regulatory and industrial testing required for labeling, Wearley says she is also presently working on getting FAA approval for ADAPTS.

“Our mission is for ADAPTS to become a part of every emergency safety kit and home disaster plan whether traveling or not. Most importantly, our biggest challenge is raising awareness and educating people who just aren’t yet aware that persons who use wheelchairs are going to need a rescue plan because their wheelchair might not be accessible to [them] when the situation arises. That takes a lot of money.”

“We are in communication with airlines, flight attendant unions, various disaster management entities like police and firefighters, hotel chains, and cruise ships and I hope the deal with the first business to adopt ADAPTS comes together soon as the disability community is no longer a niche market. More wheelchair users are traveling than ever before and they will spend their $2.9 billion somewhere where they feel their best interests are [being] addressed.”

She continues, “If the airlines won’t take it upon themselves to remedy this unmet safety need, then it will need to come through legislative means or from a push within the disability community and by flight attendants internally to their companies.”

Currently gearing up for the next Abilities Expo in Washington, DC in early December, Wearley is also running a Kickstarter campaign to raise the $30,000 needed to produce 250 to 500 ADAPTS to sell online on the ADAPTS.org website, Facebook store, and in person at the ADAPTS booth at the upcoming Abilities Expo in Los Angeles in February. Running through 18 December, at press time the Kickstarter campaign is already more that 25% funded.