For more than 30 years, Honeywell has produced sensors and switches for commercial, business and military aircraft. But as the “IoT of aviation” continues apace, the need for smarter sensors has grown. That’s why Honeywell has developed new self-diagnosing Integral Health Monitoring (IHM) proximity sensors, which can detect when a sensor has been damaged or otherwise impacted.

These configurable, non-contact devices are designed to sense the presence or absence of a target in harsh-duty aircraft applications, such as determining when a thrust reverser is not fully closed. Though they will be adopted by the military and defense sector, Phil Smith, business leader for Honeywell’s aerospace sensor business, told Runway Girl Network that the firm sees growth opportunities in the civil sector.

“Traditionally, we’ve had sensors all over the aircraft, on all the doors, the landing gear for gear up and down, within the engine itself, for thrust reversers, actuation systems and flight controls to indicate the true state of the flap or slat after the pilot input. So from that standpoint, there have always been a long list of Honeywell products that go all over the plane,” noted Smith. But in past years, an operator had no way of knowing if a sensor itself had failed, and if it was getting a false reading, which added to maintenance costs, he said. In developing the new IHM proximity sensors, Honeywell innovated an “oscillation circuit that is constantly on”, which can detect whether a sensor reading is correct.

The near-term customers for this particular product will be in military aerospace and defense as “these are high-grade proximity sensors, not a $10 sensor for the industrial market,” said the Honeywell executive. “They are designed for harsh markets … So we would sell directly to aircraft OEMs or one of their tiered suppliers making the sub system.” However, he added, “I think on the business jet side and general aviation will adopt it as well.

In order to see commercial airline adoption, Honeywell would “obviously need to have it [IHM] designed in at the OEM level in support of the airlines and freighter [operators],” said a spokesman for Honeywell Sensing and Internet of Things, the unit which produces these sensors. The IMH product “is certainly designed for newer aircraft or aircraft under development. We’re not going to be retrofitting classics; it will be for new aircraft that are currently in design.” It can be designed into a range of aircraft systems, such as thrust reversers, actuation systems, flight controls, aircraft doors, cargo loading systems, evacuation slide locks and landing gear.

Conversations around commercial adoption of IMH would need to transpire between Honeywell Aerospace and Airbus and Boeing, whose aircraft have a tremendous amount of sensors that provide valuable data about the health of the aircraft and engines.

But even using past and current generation sensor technology, Honeywell Aerospace is already working to facilitate what company senior director, connected aircraft Erica Brinker referred to during a media briefing at New York LaGuardia Airport as “informed decision-making” – i.e. anticipating the things you can do if you have the data ahead of time, like reducing operational costs, enhancing safety, and avoiding turbulence and bad weather. And that is where Honeywell Aerospace believes its JetWave connectivity hardware, which supports Inmarsat’s Global Xpress Ka-band connectivity service, will play its part in ferrying the data from sensors to the ground. 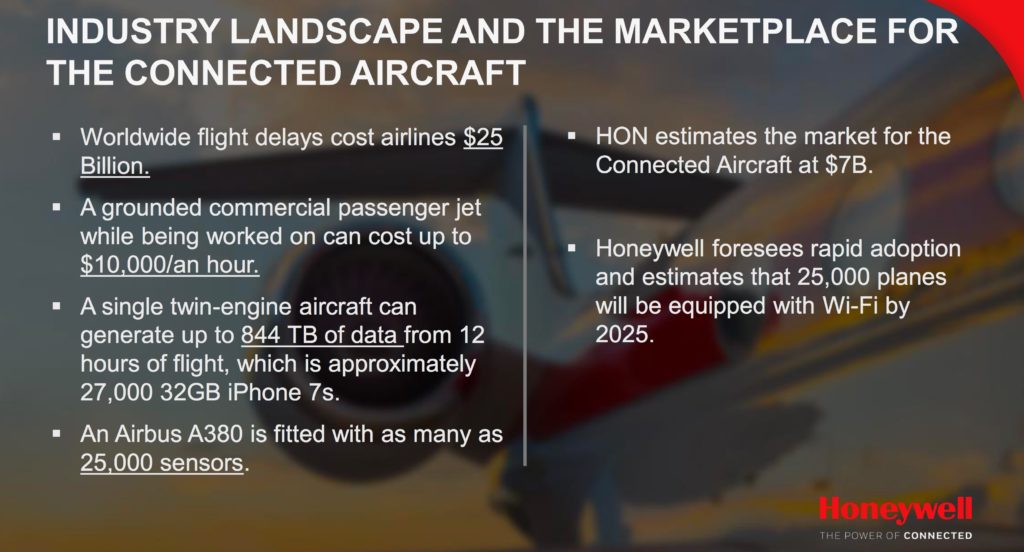 At present, a lot of health monitoring data from commercial aircraft transmits in-flight over ACARS, or are offloaded when the aircraft hits the gate. But, said Smith, “I think it’s best to unload the data when you’re in the air so the maintenance people can be ready. Certainly, there is an advantage if it can only be done at the gate, but if you are going to reduce cycle time for maintenance, you need to send while in the air.” Sending the data via Global Xpress would be far faster and more efficient than ACARS.

Indeed, some of the things Honeywell is looking at with the maintainers of aircraft “is how do we take advantage, through [inflight] connectivity, of all the installed pieces of hardware and sensors; there is a lot of data coming off of an airplane. Honeywell now has gotten the ability to take a lot of that data off the airplane and do something with it,” said director, fight services Kiah Erlich during the media briefing.

On the ground, Honeywell is expanding its GoDirect Connected Maintenance for auxiliary power units, to include wheels, brakes and environmental control systems. “So with our connected wheels and brakes we have the ability now [for you] to take your cell phone out and take a picture of the brakes and it will know exactly what the wear and tear is,” explained Erlich.

“We have an algorithm built in that takes from the camera and it knows how much [wheels and brakes have] worn down; it measures it for you automatically. Taking that a step further with sensors, the sensors will Bluetooth that connection to your phone and tell the maintainer, tell the pilot, tell whoever in the flight department needs to know, exactly what the wear and tear is on that brake and when that needs to be replaced. 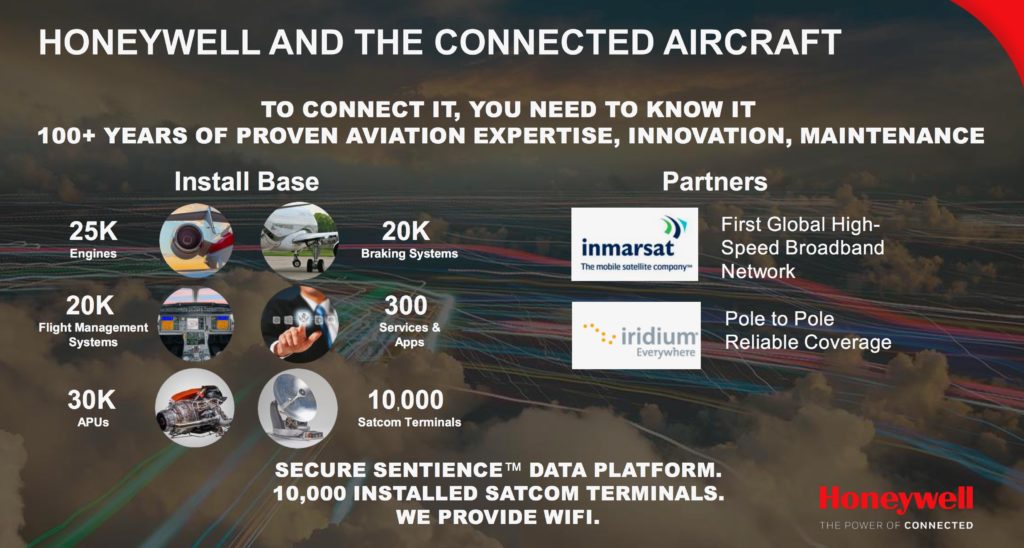 Honeywell sees itself as uniquely positioned to support the IoT of aviation. Image: Honeywell

Eventually, Honeywell Aerospace will “take that a step further where we’ll have prognostics”, said Erlich. “We’ll know exactly when those wheels and brakes are going to be wearing down, and we’ll send you the part automatically. A lot of that will be coming.”

Added the Honeywell spokesman, “One of the biggest costs in aviation is missed schedules due to maintenance at the gate, so we’re trying to improve airlines’ bottom line and improve the customer experience for those of us who travel a lot.”

Airberlin doubles up and doubles down on Eurobusiness