Anyone who tells you that flying with kids in coach is easy is either fibbing or has never done it. Because no matter how much you prepare or how much you buy – that old parenting magazine chestnut about the novelty of a new toy keeping a child spellbound during the flight is a crock, don’t waste your money – you can never be fully prepared for the unrelenting insanity that regularly occurs on flights with kids. Because kids, like connecting flights through O’Hare in the winter, are as unpredictable as they come.

But, believe it or not, the one saving grace that I have found during my darkest hours on an airplane with a child are other parents. That’s right, even in a crowded cabin, it takes a village. And while I’ve also had a few really bad experiences with judgy, snarky parents (and non parents for that matter, but that’s a whole other story) who are either too wrapped up in their own inflight child drama to lend a hand, a wipe, or even a kind word, for the most part other parents on airplanes have totally had my back.

And whether that’s because my wife and I don’t look like we know what we’re doing half the time or because we’re flying with a cute kid with Minnie Mouse glasses, the community of parents in coach have been a total lifesaver over the years. 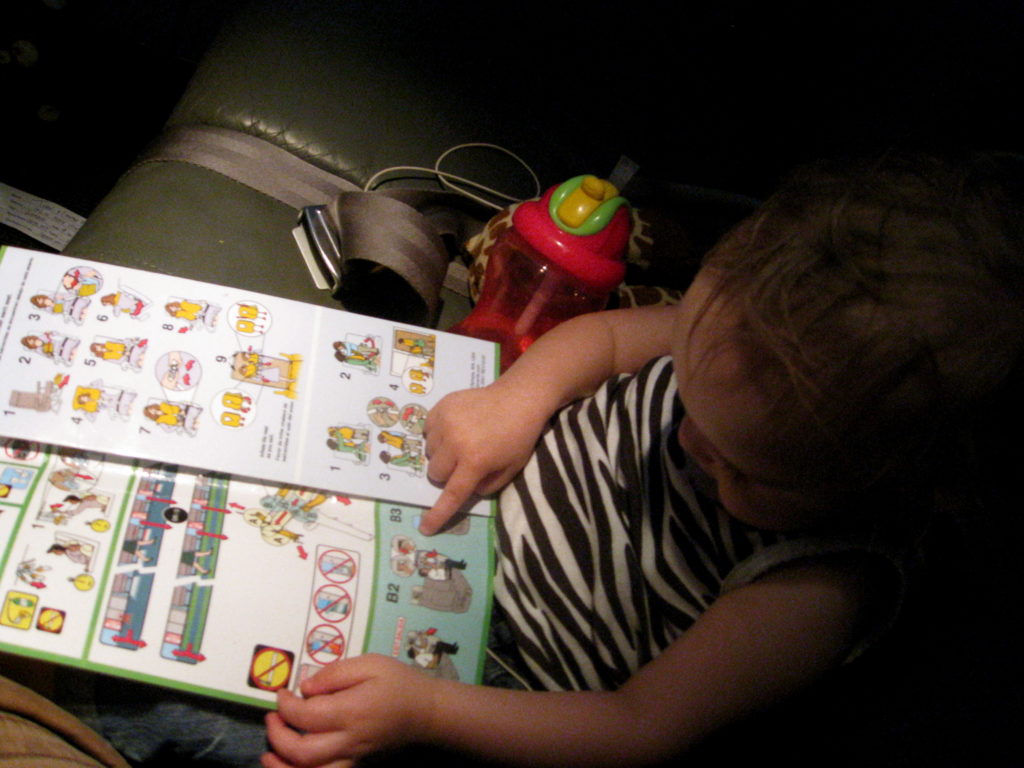 No matter what you bring to entertain your child, they will always find entertainment in the oddest of places. Image: Tomas Romero

On two separate occasions I’ve had moms share their snacks and/or juice with us. One mom shared a toy, another a headset, and one very kindly Grandmother on a red-eye from LAX to JFK even held our sleeping infant daughter so that we could go to the bathroom without waking her up.

That kind of stuff might be happening in First and Business Class as well, but there is something about the close quarters of coach, especially when flying with kids and all their attendant accessories, that somehow lends itself to chipping in and helping out, if for no other reason than to keep the aisle clear and the child in question happy and quiet for the duration of the flight. 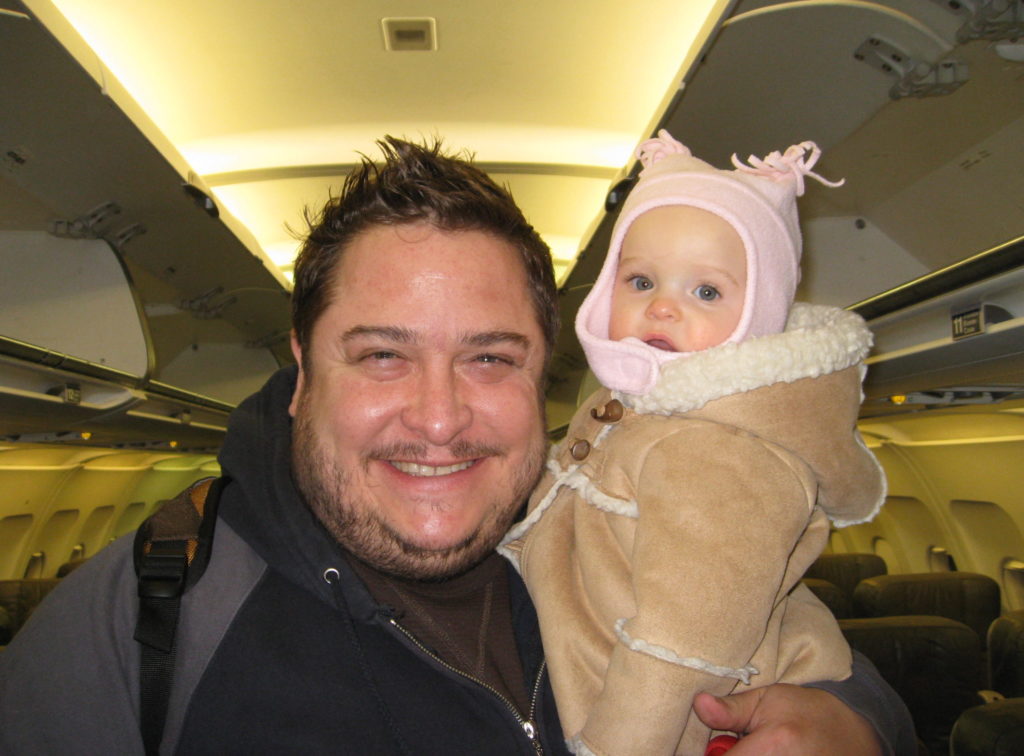 When flying with kids, it takes a village. The author and his daughter. Image: Tomas Romero

Perhaps the coolest thing that ever happened to us in coach with my daughter was the time a JetBlue flight attendant actually gave her a snack out of her own sack lunch. And though I can’t exactly recall the specifics of what she gave her to eat – to be honest, I don’t remember caring what it was as long as it kept my kid from crying – the memory of a kindly flight attendant hurrying back to the galley to grab my daughter said treat from her personal lunch is imprinted on my memory for life. So awesome!

Another huge lifesaver over the years have been the passenger-parents who actually switch seats with us so we can sit together as a family when we’ve either booked too late to find seats together or simply failed to book them that way in the first place. Hey, it happens to the best of us. And while these kind souls might just be swapping seats with us to avoid sitting next to a big boned dude with a chatty kid, the fact that they have even a passing interest in our plight shows you just how real the camaraderie of coach can really be even in the worst of times. 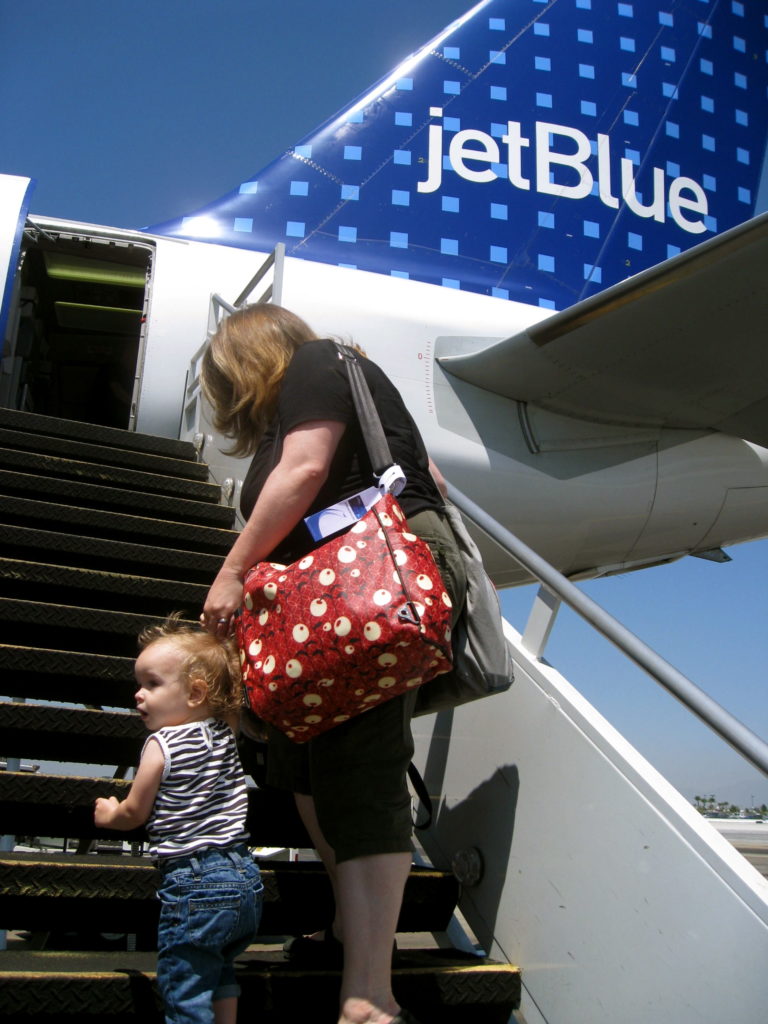 But the real gold stars go to the parents who actually compliment you on how well behaved your child was during the flight, even when they were a holy terror the entire time. These beautiful liars have made my day more than once and for that, and so much more, I salute you.