A small Irish firm claims it has been successfully achieving 1,000 Mbps download and upload speeds while flight-testing its new datalink technology over the skies of County Kildare, Ireland.

Dublin-headquartered Aeronet Global Communications Services says it is using telecoms technology to support its high-speed transmissions to and from a specially equipped helicopter. “So the way 4G cell towers talk to each other in a static environment, we’re making that work in an aerial environment. So very high-capacity point-to-point datalinks. It’s both air-to-ground (ATG) and it’s air-to-air forming a mesh,” company chief operating officer Brian Russell tells Runway Girl Network.

“So imagine really narrow, very high-capacity beams each hitting only one plane.” Aeronet’s technology map would see the roll-out of an ATG-based datalink product initially, but later enhanced with mesh functionality.

From your author’s vantage point, it sounds like Aeronet’s solution bears some resemblance to the tools in SmartSky Networks’ shed, and the work being conducted by California-based Airborne Wireless Network. But, insists Russell, SmartSky is “limited in spectrum choice of 60 MHz, way above what everybody else has for air-to-ground, [but] we’re talking about 1,000 MHz.

“So we have engagements with the FCC [Federal Communications Commission] and we have draft notices for new licenses in our frequency range, 1,000 MHz of frequency. So 1,000 MHz of frequency, all delivered to a single plane, not shared to loads of planes, and giving you 1 GB up and down.” Russell did not provide further spectrum details.

He says Aeronet did “all our development in quiet” before publishing information about its offering because “people will go ‘I want to do it.’ We have done it and we are happy to work with people and show them how we did it, but I am not showing people exactly all the secret sauce.”

The firm “purposefully” picked a helicopter to conduct its flight tests “because strange as it seems, it is way harder on a helicopter then it is on a Boeing 737 or on an Airbus because it vibrates like mad and actually vibration is the biggest enemy to this technology.” The helicopter is fitted with a 9-inch parabolic antenna.

And what type of antenna equipment would Aeronet envisage for commercial aircraft? “So it’s about 15-16kg on the aircraft – one on the underside just at the wing fairings, one in the nose cone and one in the tail skid. So that the wing fairing one pointing down gives you the air-to-ground link, the nose cone looks forward and finds the next aircraft, and the tail skid picks it up,” says Russell.

Aeronet executives attended the Aircraft Interiors Expo (AIX) in April, and spoke to various stakeholders in the inflight entertainment and connectivity space. “Our AIX and subsequent engagements reinforced our long-held belief that the underlying consumer demand is for a step change in connectivity service levels,” says Russell. “The ability of systems to interoperate is important for the short- and long-term of aviation connectivity as the global consumer demand is greater than any one system.

“Our software development has focused … on ensuring our system can operate with satcom systems, help solve capacity bottleneck and upload constraints and bring improved service levels to consumers. We have put in place relationships with new partners since AIX, expanding the size of our ecology of partners bringing our ATG product to market. The latest one provides us with USA-based aircraft as part of our plan to open a live demonstration facility in the USA. Conversations with a number of customer partners are ongoing but are confidential at present.”

On the technical front, Aeronet’s various simulation tests of network operating scenarios at its test facility in Maynooth, Ireland “continues to successfully prove a reliable 1,000 Mbps download and upload performance”, states Russell. “The results are currently being worked into hardware improvements to further reduce the size and weight of the onboard antenna.”

Meanwhile, the company’s virtual simulations of the mesh network with live flight data “have shown the robustness and reliability of the mesh system to operate with even small numbers of airline customers. As more airlines adopt the Aeronet Gbps connectivity, the mesh architecture becomes even stronger and can be easily upgraded with additional capacity at each ground station,” adds the firm. 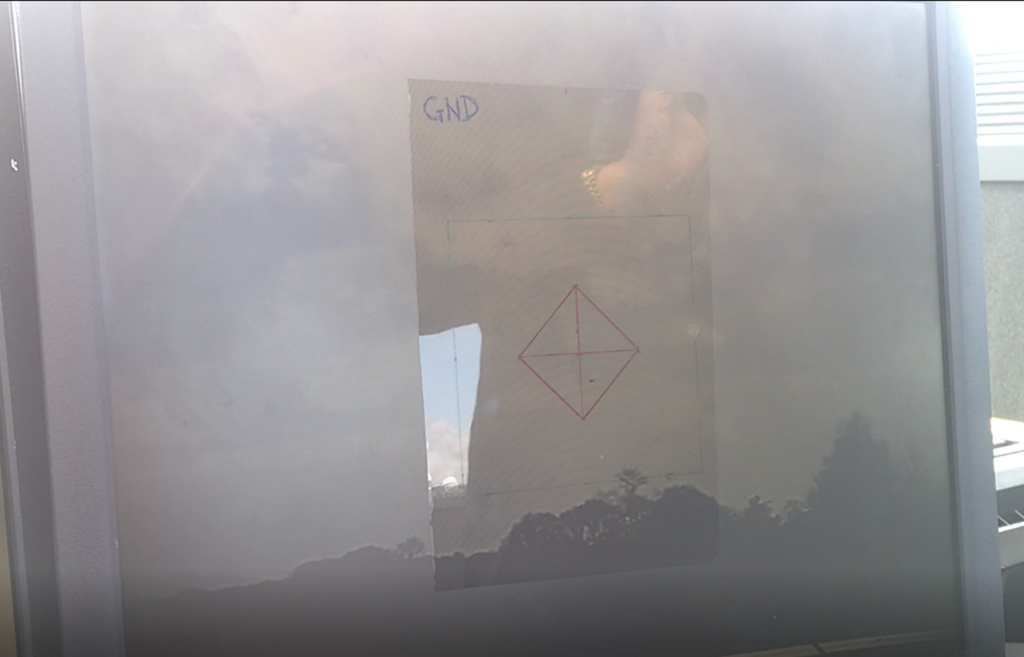 This screen capture was taken mid test flight while doing 1,000 Mbps, according to Aeronet. “The dot in the bottom right red triangle is the aircraft. To give you a reference scale, the red diamond is a sub 1 degree beam. Our datalink operates at these very narrow beam widths which helps to give the Gbps speeds.” Image: Aeronet