Following last year’s demise of inflight entertainment firm Lumexis; the recent decision by American Airlines not to take seatback IFE for its new Boeing 737 MAX twinjets (plus rumors swirling that it will remove monitors from narrowbodies); and Rockwell Collins’ exit from its seatback business, one could be forgiven for assuming that embedded IFE has jumped the shark.

But with rare exceptions (like low-cost carrier Scoot), the vast majority of international carriers continue to accept delivery of widebody aircraft with seatback entertainment, this distraction being one of the few comfort factors afforded to economy class passengers on long-haul flights. Moreover, broadcast overhead monitors are still prevalent on narrowbodies, including on new-design jets like the Bombardier CSeries. All of which spells opportunity in the eyes of big-name providers like Panasonic Avionics, Thales Avionics, Zodiac Inflight Innovations (and Rockwell for its broadcast overhead monitors for OEMs), plus smaller firms, like digEcor.

“The reality is we still continue to build and ship seatback [systems]. We’ve seen no decline in that,” said digEcor chief executive David Withers at AIX 17 in reference to the firm’s GLIDE-branded embedded IFE solution.

He believes Lumexis’ shuttering “was unfortunate for the industry. I think the damage it did was more about undermining confidence in the smaller companies like ourselves. So Lumexis had been well backed, as we are, and then the backing stopped and they disappeared. And that was obviously hard for a lot of people personally who were involved. And hard for a number of customers that they had.

“I think Rockwell’s [reason for exiting] is very different. When you talk to Rockwell about it, they very much say, ‘we’ve become a seat player; B/E has been very strong on the fact that they’re agnostic as to who their IFE supplier is. We don’t want to be competing; we don’t want to become another Zodiac.’ And strategically, from the very top, they’ve made it clear to us that they’re not exiting because they don’t believe in it. They’re exiting because they have an uncompetitive seatback product and they don’t want to be seat guys having to compete with themselves in IFE. So I think it makes strategic sense. Exiting IFE is a fairly logical step for them to take. And obviously if you walk around the halls, there’s a whole lot of smaller newcomers that are playing in seatback.”

Though digEcor says it has not observed diminished interest for in-seat IFE – it secured its first European customer for GLIDE seatback IFE last year – it has seen a decline in enquiries for standalone wireless entertainment systems in the last six months. “Yes, connectivity is coming through” and is a reason, said Withers. “And, because [premium] content is more expensive for Wi-Fi, we can do seatback over five years at a lower price point than Wi-Fi. So we’ve had a number of customers that started on Wi-Fi and ended up doing seatback because it just makes more sense. So of course, if advertising is part of your revenue stream, [you get] 100% eyeballs on seatback; 20%-25% of your eyeballs, if you’re lucky, on Wi-Fi.” The ultimate, however, “is to have both; and that’s probably where the bulk of the Wi-Fi enquiries come now is – how do we package up the whole deal so passengers can choose [how they watch content].”

When Withers joined digEcor four years ago, he did so with the aim of transforming what was then known as a portable IFE business into a full-service, passenger technology company. Now digEcor’s portfolio is “modular and complete”, according to Withers. “If you want to do lighting, power, seatback [IFE], we have all of that and we design it all ourselves. We bring all of that together.”

“So I think the exciting thing we’re doing with our customers at the moment is creating that opportunity for them to define a passenger experience and just pull from the building blocks and assemble … to suit their needs. And that ranges from an old 737 replacing the [Rockwell] PAVES front-end with a digital head-end that also replaces PRAM [the pre-recorded announcement system] and gives them functionality, to which they then add Wi-Fi or USB power in the back. Then maybe in business or first class they put in an embedded screen. You can mix and match all of those products and you don’t have to do it all at once. And you’re not wasting any investment…”

To wit, Turkish leisure carrier Corendon recently selected digEcor’s GLIDE tape replacement solution for six Boeing 737-800 aircraft with the possibility of a further order taking the potential purchase to 12 aircraft. The offering will provide Corendon with the head-end device of the GLIDE embedded IFE system, it’s cabin management terminal, a single touchscreen LRU which replaces the entire video control centre, the PRAM, public address, boarding music function and adds a moving map. “With no changes to wiring or monitors the system essentially is installed as a plug and play solution,” boasts digEcor.

Paul Thorpe, VP global sales at digEcor, says this simplified installation “solves existing obsolescence issues and provides their airline’s passengers many of the features of a typical overhead IFE system in one unit with broader content choice, digital sound and enhances viewing quality.”

On the in-seat power front, digEcor agrees with other industry stakeholders that airlines will largely move to USB-only solutions in economy class in the coming years as USB “really is becoming a hygiene factor”, a positive for passengers.

“Yes, I would agree with that entirely,” said Withers. “I think business and first will take 110v power for some time. I think that will ultimately get replaced by USB-C, but that is not without its challenges. The USB jack is actually rather fragile, and I think we’ve got a little way to go before that replaces laptop [power]. And of course the adoption of laptops; there still are not very much laptops that charge with USB-C, so I think 110v will survive at the front of the airplane but I have no doubt that the back end will be all USB power.”

Zodiac Aerospace made a similar prediction at AIX 17, with management telling RGN, “We are seeing a moving, obviously, in [IFE] handsets going away for long-range seats, long-range coach, and we are seeing a possible movement away from AC power because everybody is going to USB. It is not happening this year or next year but in the next five years I would suspect everybody pretty much goes to USB.”

Another interesting trend, said Withers, is the way in which USB power will be offered. “Traditionally, you got an airplane, you bought a seat, you bought power. And there are straight transactions in that. Increasingly, that’s going to become [a scenario whereby] you’ll buy a seat and that seat is equipped with USB power… And we have done a lot of work to encourage that model, and have done a lot of work with seat manufacturers and OEMs to install that for seat capabilities,” he said.

Seatmakers are now thinking, “Actually, rather than charging someone to put a hole in the seat where they can fit power, why don’t I fit the power, I’ll make a margin on it, so it becomes a profit feed, and I’ll sell the seat already equipped. It can actually be a cool design rather than something that becomes a bit of an afterthought. So I’m really excited about that trend. And we’re well positioned in that space; it’s really exciting,” added Withers. 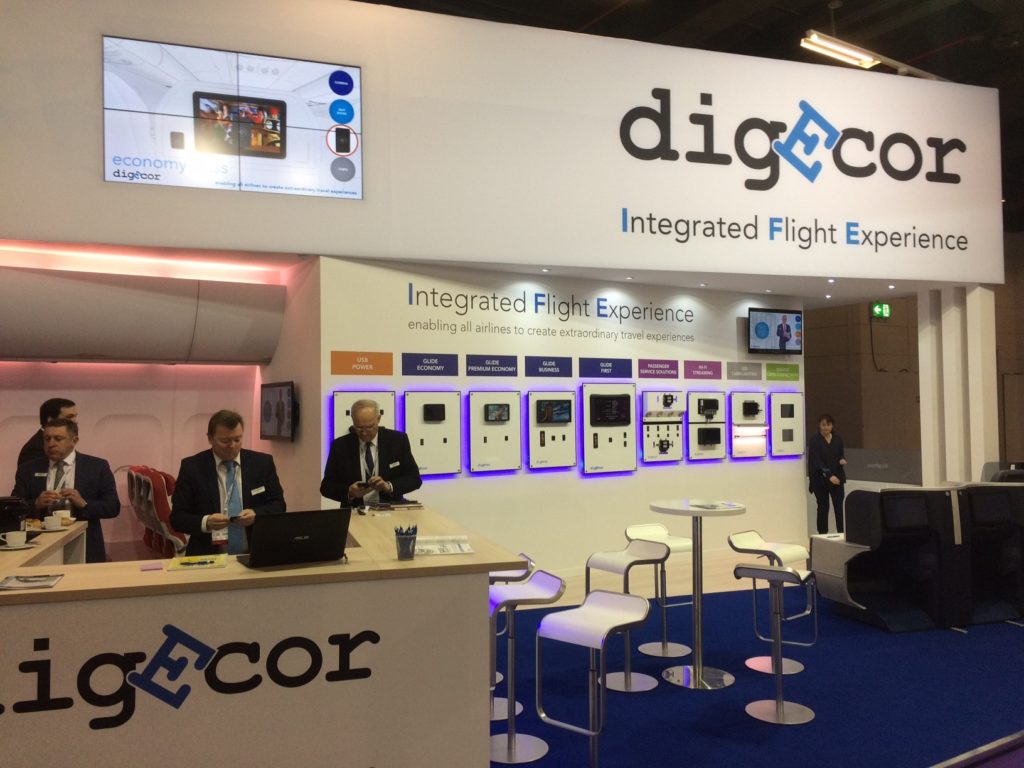 In addition to embedded IFE and lighting, digEcor’s product portfolio includes in-seat power. In a testament to the popularity of USB-only solutions in economy, digEcor recently announced that together with IFPL it will be providing power to the Mirus Hawk seat ordered by AirAsia. Image: digEcor

From a hardware perspective, digEcor is happy it diversified its portfolio and says it is now beginning a refresh cycle with some of its customers. It’s migrating from simply a hardware platform to more of a software functionality “and layering up that value”.