Returning from Hamburg to the UK following the Aircraft Interiors Expo, I discovered that Lufthansa’s low-cost carrier arm Eurowings was operating a flight to Birmingham, a convenient airport to family and friends, serving England’s third most populous urban area, about an hour northwest of London Heathrow.

With two expo-sized suitcases and the expectation of being exhausted (and thus grateful for extra legroom plus extra space with a guarantee of no seat neighbour), I forked out the €139 (US $149) for the Best fare, which is the equivalent of business class in almost every way.

In addition to the extra-legroom seat and empty middle seat, Best comes with two pieces of checked luggage, priority checkin and fast-track security (which worked well at Hamburg), priority boarding (which was nonexistent), lounge access (which I didn’t have time for), and a full choice from the inflight buy-on-board menu.

Hamburg Airport was having a baggage system meltdown when I arrived, so I had to skip a quick visit to the relatively unimpressive Lufthansa Business Lounge in favour of proceeding to the non-Schengen departure zone, which is renowned for significant delays at passport control.

With a bus gate, priority boarding was inexplicably skipped, and I squeezed onto the airport bus out to the stairs up to the Airbus awaiting me.

On the aircraft, the Best section (with the Eurobusiness seating) was separated from the Smart seats (32″ legroom but no free middle seat, stretching from the front to the exit row) by a unique hang-down divider, which was positioned in the standard spot behind row 3 on my flight. I thought this option felt far superior in appearance and brand positioning than the fussy curtains other airlines use, and it also makes for an excellent selfie opportunity.

Aw, thanks @eurowings! I think you're great too. 💜 #thatjohnonEW pic.twitter.com/ubYnImTrm0

I was very pleased with the amount of space available in the seats, which was 32” but felt like 34” thanks to the Lufthansa standard Recaro NEK slimline seats. While I know many folks dislike the narrower Alaska Airlines Boeing 737 version of these seats, for a quick hop across the North Sea timetabled at 1h30 I found them very comfortable in their class, of a decent width, and with enough legroom that even my 6’3” knees didn’t touch the seat in front. 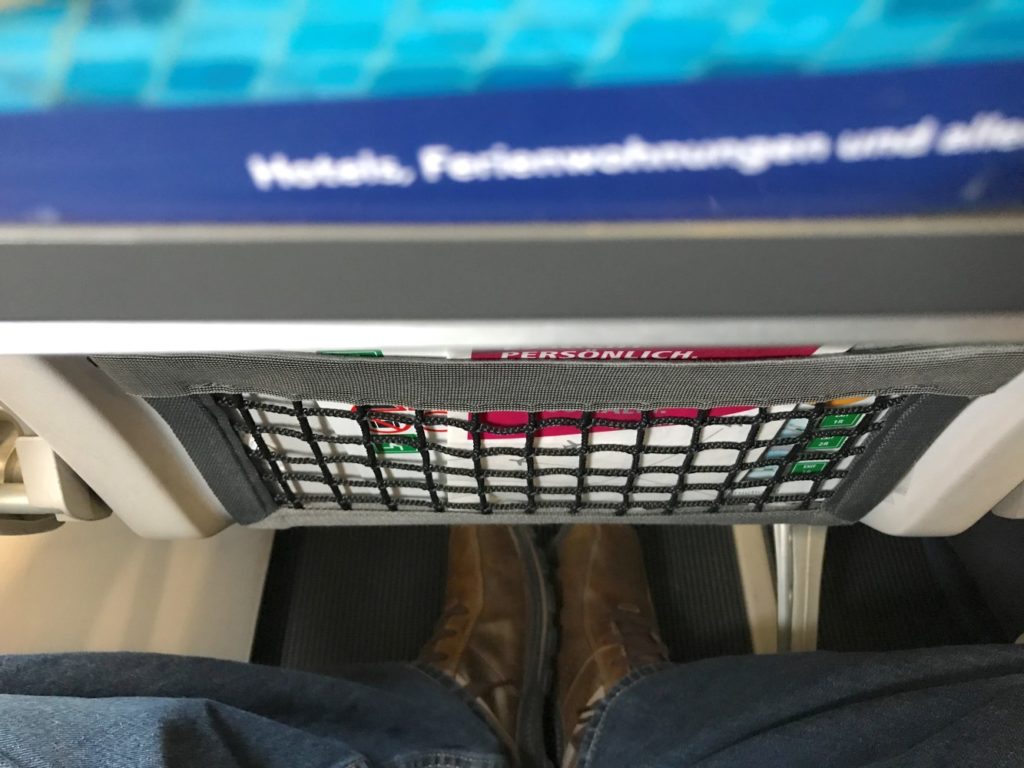 Once in the air, the crew came round with the trolley. I’d spotted Almdudler, a faintly herbal Austrian sparkling soft drink that I remember fondly from childhood. It was as refreshing as ever, and I was delighted to see it on an inflight menu along with Apfelschorle, the typically German apple juice spritzer.

Delicious, soft but chewy pretzelbread and turkey sandwich with Almdudler and some M&Ms. Great #paxex for Europe! #thatjohnonEW pic.twitter.com/AlJFCKGCu1

The turkey sandwich on pretzel bread I selected from the range of three options was fresh, tasty and hit the spot. I really liked that there were two monthly options to shake things up, in addition to the tapas selection for people who didn’t want a sandwich or were avoiding gluten. I was also tempted by the chewy rye bread sandwich, another signature German favourite, and was delighted to see Eurowings (formerly Germanwings) retaining some of its identity and history to create a menu with an “ooh, yum” factor.

I appreciated the usual Lufthansa Group refreshing towel to wipe the airport off my hands before eating, and also liked that they served my little bag of peanut M&Ms with a cup to avoid having to get my grubby, germy fingers all over them.

The crew was friendly and efficient, making two passes through the cabin with the trolley, plus making sure they popped by the Best section to check whether anyone wanted anything else.

At the end of the flight, I couldn’t help but compare it to the immensely disappointing British Airways Club Europe experience I’d had the week before. The legroom was miles (well, inches) better, the food was better, and the overall experience exceeded my expectations for an LCC — at an exceedingly reasonable price. Eurowings might just have become my first choice intra-European airline.