Zodiac Aerospace’s CEO, Olivier Zarrouati, has put his job in the hands of the troubled supplier’s board of directors, which has also appointed a new special advisor to supervise negotiations concerning a takeover from Safran, and to determine what shape a standalone Zodiac would take if the Safran deal were to fail.

Further details are also emerging about the nature of the challenges Zodiac has faced across its commercial aircraft seating and interiors businesses, with its UK operation continuing to be problematic. Zodiac’s H1 2016-17 current operating income (COI) plummeted from €80m to -€12m compared with the previous year.

Zodiac says its Aircraft Interiors business, which includes seating and cabin products, was “largely affected by a high level of excess costs in H1”, namely the Zodiac Seats UK unit, the cabin “ramp-up of new programs (A350XWB, A320 Spaceflex, CSeries)”, which are “still generating production variances”, and “priority given to customers: high costs to improve on-time deliveries”.

Seats remain a problem for Zodiac, airlines and aircraft OEMs

The Zodiac Seats UK business suffered “higher overrun costs than initially expected”, with “a higher level of provisions in seats”, “additional penalties and claims in the Aircraft Interiors activities”, and a “full assessment of risks and opportunities for the remaining six months leading to [a] higher level of provisions”, according to the firm’s investor slide deck.

Meanwhile, Zodiac reports its Seats US business is “back to normal operational performance”, despite “industrial issues concentrated in the UK generating significant disruptions and delays”. Zodiac expects the issues at its Seats UK business to be solved with a “new management and organisation in place” and a “return to normal operations by mid FY17/18”.

Following the Aircraft Interiors Expo (AIX) in early April, Zodiac is seeing “strong interest” for its new Optima business class seat with “new business expected in the short term,” although it is unclear whether this interest is affected by ongoing delays delivering the Optima-based United Polaris product, which has caused Boeing to park multiple factory-fresh 777-300ER aircraft as a result of a lack of seats.

The company also says that, at AIX, “Optima [was] elected as the Best Business Class seat”, although a Zodiac spokesperson confirms that this was based on a small web poll in Aircraft Interiors International magazine. Polaris placed third behind the Thompson Vantage XL+ business suite with doors and the Bombardier CSeries cabin in its category at the Crystal Cabin Awards, according to organizers.

“We are very pleased to see that all the efforts put into the development of this concept (with Acumen) and into the prototyping of the A class demonstrator have been recognized by the visitors of the AIX, which we know are massively exposed to many innovations from our industry,” Laurent Stritter, Zodiac vice president for communication, marketing and product strategy, tells Runway Girl Network.

“This confirms we have found the right balance with the Optima concept offering a unique value proposition on the high density business class segment with the capacity to offer state of the art passenger experience with direct aisle access for all. The great benefit for the airlines being that it comes without sacrificing the density vs current competition reaching the same seat count with only half of the passengers having direct aisle access.” Air France is evaluating Optima for its high-density 777 subfleet, plying leisure flights to the Caribbean, RGN can confirm. 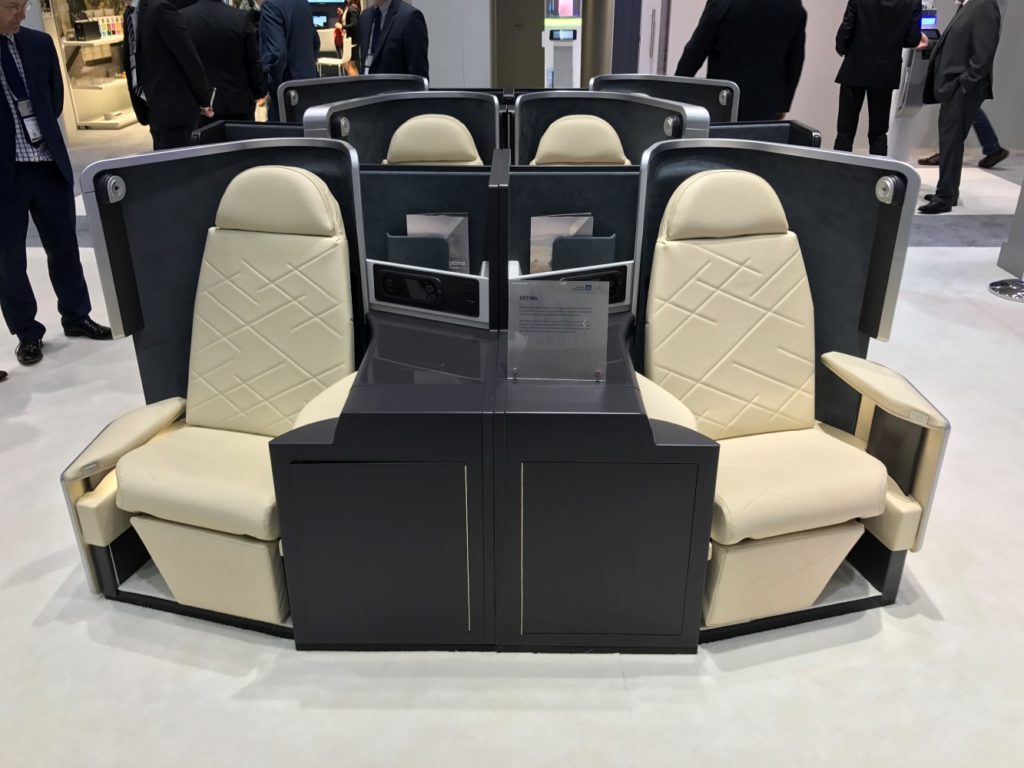 Zodiac’s Optima, in its Polaris version, finished third in its category at the Crystal Cabin awards. Image: John Walton

On the A350 lavatories, for which Zodiac is sole supplier, the firm expects to be “returning to normal industrial conditions, reducing overheads and climbing up the learning curve,” noting that it has seen “already some tangible improvements in quality and on-time delivery”. It expects to be back to its initial delivery agenda by the end of May, which will enable it to operate in more “adequate industrial conditions”. For the latter point, Zodiac expects a “stabilised supply chain”, and will “focus engineering resources to a more limited number of design topics to be addressed by year end”, and the “downscaling of on-site support and associated costs”.

For the Spaceflex V2 galley-lav combo, Zodiac notes a “strong ramp-up,” which is “ahead of expected learning curve”. The CSeries, meanwhile, is the “second largest ramp-up for the [Cabin] Branch”, with an “increase of monthly production rates on going” [sic].

Here and elsewhere in its investor presentation, Zodiac’s messaging is clumsy. It would appear that the company failed to have its investor slide deck proofread by a native English speaker for clarity of intention in the largely English-speaking international investment market, which seems unwise in the context of substantial international shareholder activism.

Zodiac wants Safran, but is parachuting in a fixer for the deal or an independent option

“The contemplated transaction with Safran stays our preferred scenario,” Zodiac says, noting that “discussions are ongoing in a favorable environment,” and promising that “we will update the market as soon as there is any significant development.”

In that context, CEO Olivier Zarrouati “has placed his mandate as CEO at the disposal of the board of directors. Even if the recent results were disappointing, the board of directors recognized his outstanding achievement over his 10 years tenure. The total shareholders’ return is just below 300% which is the 2nd best performance of the global sector,” says Zodiac in a formal statement.

The board also appointed Yann Delabrière, former CEO of automotive parts giant Faurecia, to “ensure close coordination between the board of directors and the operational teams to accelerate and deliver the industrial and operational recovery of the Group, which would facilitate a smooth integration of Zodiac Aerospace within the Safran Group should the ongoing discussions succeed”, and “ensure a robust and sustainable standalone scenario should the ongoing discussions with Safran come to an end”.

Pointing to the future, Zodiac claims it has a “unique strategic position”, with a “presence on all future platforms”, with “profitable deliveries once learning curve executed”. It also expects a “significant aftersales stream from new fleets to materialise over the next decade”, and expects to be “benefiting from an increased installed base on successful aircraft platforms”.

Zodiac sees “a growing demand from airlines on cabin retrofit programs”, with its “product portfolio and innovation DNA allowing to answer to market demand” [sic]. The company intends to maintain its “positions in an attractive market,” benefiting from what it calls “a high growth market” with “strong entry barriers in both SFE and BFE businesses”.

Yet relying on those barriers would be unwise. Its SFE (supplier-furnished equipment, i.e. from airframers’ catalogues) business relies on aircraft manufacturers, and Zodiac is very much not in favour in either Toulouse or Seattle. Indeed, within the Aerosystems business, Zodiac found “Water & Waste penalized by lower biz & regional jets and decrease of Boeing sales”.

Meanwhile, its BFE (buyer-furnished equipment, i.e. selected by airlines) fortunes are under threat from Rockwell Collins (formerly B/E Aerospace) and smaller seatmakers including Thompson, Stelia, Aviointeriors, and Recaro in business class, plus upstart seatmakers like Mirus, ZIM and Acro in economy and premium economy.

Within the industry, Zodiac will need to mend a substantial number of fences if it expects airlines and airframers not to lower the barriers to entry on which it appears to be relying for future profitability.